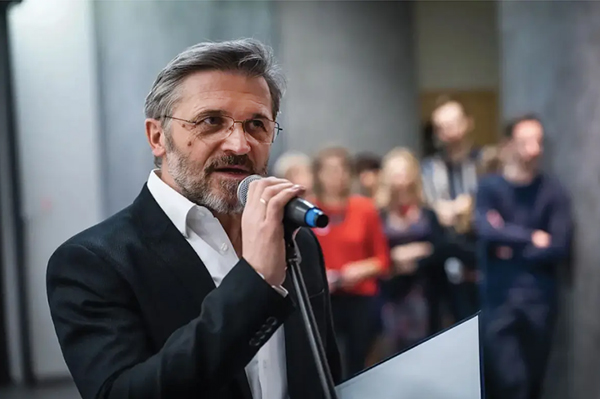 Jarosław Suchan, who has been director of the Łódź museum since 2006, was sacked with no explanation. Muzeum Sztuki w Łodzi/Facebook.

Anny Shaw, ‘A shock to the community worldwide’: directors of Tate, Guggenheim and MoMA condemn ousting of Polish museum head, The Art Newspaper, 30 May 2022

Critics say the sudden dismissal of Jarosław Suchan is the latest attempt by Poland’s right-wing government at exercising greater control over cultural institutions. With additional reporting by Gareth Harris.
Some of the world’s top museum directors have condemned the sudden dismissal of Jarosław Suchan from his position as the director of the Muzeum Sztuki in Lodz, Poland at the end of April in a move many say is politically motivated. Having led the institution since 2006, Suchan’s contract was not renewed by Poland’s ruling right-wing Law and Justice party in November. He was instead appointed acting director. In April, Suchan attended a meeting with Jarosław Sellin, the country’s deputy culture minister, when he was “suddenly informed” he had been dismissed. “I didn’t get any explanation,” Suchan says. “It was quite shocking.”

The Polish government replaced him with the artist Andrzej Biernacki. In a letter sent to Poland’s deputy prime minister and culture minister, Piotr Gliński, Richard Armstrong—the director of the Solomon R. Guggenheim Museum in New York—described Suchan’s removal as a “shock to the museum community worldwide”. He noted how the Guggenheim has “long maintained excellent relations and intensive partnerships” with the Muzeum Sztuki, to a large extent facilitated by Suchan, who has played a “critical role in raising the international profile” of the Polish institution and the city of Łódź.

[Jarosław Suchan has] done so much to give modern and contemporary Polish art the international recognition it deserves. Glenn D. Lowry, MoMA

In another letter to Gliński, Glenn D. Lowry, the director of New York’s Museum of Modern Art (MoMA), described Suchan as a “distinguished scholar and widely respected colleague” who has “done so much to give modern and contemporary Polish art the international recognition it deserves”. Suchan established relationships with MoMA and the Museo Nacional Centro de Arte Reina Sofía in Madrid, organising travelling exhibitions and loan exchanges. The Tate’s director Maria Balshaw says she “stands with all the directors of the Bizot Group [of the world’s leading museums]” and “condemns this dismissal”.

Suchan is the latest casualty in what critics say is an attempt by the Polish government to exercise greater control over museums. Armstrong says the recent departure of the directors at the Zachęta National Gallery of Art (Hanna Wróblewska) and the National Museum, Warsaw (Agnieszka Morawińska), followed by Suchan’s dismissal, “indicate the government’s wrong-headed move to reduce these museums to the status of ideological puppets”.

The Warsaw-born artist Michał Frydrych reflects on the Polish government’s position on arts and culture, saying: “There is definitely pressure applied to make people conform to official policies. The tools for that are manifold, mainly loss of employment, but sometimes there are more drastic measures such as attempts at stifling artists’ voices via state-led litigation or draconian fines. We’re in the process of setting up an anti-censorship fund for artists and culture sector workers. All is not lost. Some countermeasures have materialised; for instance, lots of curators and artists are working within informal networks.”

A narrowing focus on national and local artists

Suchan’s replacement, Biernacki, has run the private Browarna Gallery in Łowicz since 1991, though he has no experience in running a public institution. In an interview with the Polish news organisation Wyborcza, Biernacki says he intends to switch the focus of the Muzeum Sztuki’s collection from international to Polish artists, specifically those from Łódź. “No one said that you should only deal with pro-environmental, gender or queer art that is promoted by Western cultural institutions,” he said. 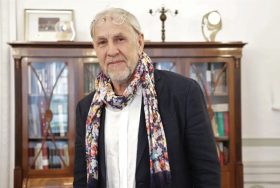 The Polish government has appointed the artist Andrzej Biernacki, who has no museum experience. gov.pl

His appointment has angered the Polish contemporary art community, who, in an open letter, describe Biernacki as “an impetuous publicist and gallerist in one, a person with a complete lack of museal experience and management”. They add: “What is the rational reason behind an avant-garde institution to be governed by a person who condemns and undermines the meaning of change, experimentation, and social awareness in art, for whom avant-garde tradition is at most a distraction?” The decision, they say, “is jeopardising the position of our country as an active organ in Europe and the world. Such politics of isolation […] promote the degeneration of Polish cultural heritage. History repeats itself.” Biernacki tells The Art Newspaper: “I don’t want to refer to existing quotes taken out of context.”

Suchan, meanwhile, says he is not optimistic about the future of the cultural scene in Poland and beyond. “What we are facing right now in Poland is not only a local phenomenon; this is an element of something much broader,” he says. “There are two tectonic plates that are crashing at the moment. One is created by this neoliberal hegemony and the other is defined by populistic politics. Even in those countries where democracy is much stronger and much better rooted in history, you see some dangerous tendencies.”