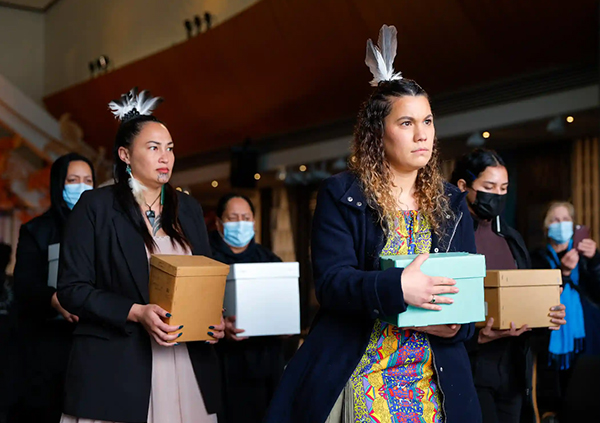 The remains of Moriori are carried out of the marae after a repatriation ceremony at Te Papa Tongarewa national museum in Wellington, New Zealand, on Friday. Photograph: Hagen Hopkins.

Remains returned from UK Natural History Museum as well as from across New Zealand, a century after being dug up as curiosities by explorers.

The skeletal remains of more than 100 Moriori ancestors, the Indigenous people of Rēkohu – or the Chatham Islands – have been returned to the tribe from the UK, as part of the largest single repatriation of Moriori remains to date.

The ancestral remains, or karāpuna in Moriori dialect, were unceremoniously dug up by colonisers to be traded as curiosities and, for up to 100 years since, have sat in collections in London’s Natural History Museum and across Aotearoa New Zealand.

But on Friday morning, under rainy skies in Wellington, they were finally returned to their people, in a moving ceremony held at Te Papa Tongarewa, the national museum. There, the remains will be temporarily held in a wāhi tapu – a sacred resting site – before they are taken back to their rightful resting place on Rēkohu. 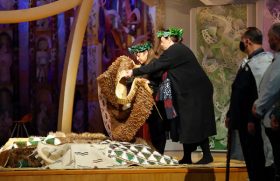 The Natural History Museum in London has returned 111 Moriori ancestral remains and two Māori ancestral remains. At the same time, nearly 200 karāpuna from five domestic museums and universities have been returned, in what is the largest internal repatriation.

The overseas repatriation – the culmination of 15 years of research and negotiations – marks the first time the Natural History Museum has agreed to return ancestral remains to New Zealand.

“It is fulfilling an obligation to our ancestors,” says Maui Solomon, the chair of the Hokotehi Moriori Trust, who had tears in his eyes during the ceremony. 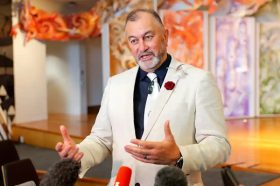 Maui Solomon, the chair of the Hokotehi Moriori Trust, said an obligation to ancestors had been fulfilled. Photograph: Hagen Hopkins.

“Having suffered so much through the post-colonial contact history and then to have their remains taken offshore for research purposes, or curiosity, over 100 years ago – to actually be bringing them back home … is, in many ways, the ultimate honouring of our ancestors.”

Moriori and Māori hold their ancestors in great reverence, Solomon said, adding that the karāpuna would have felt “emotional and happy” to hear their language, which is in the process of being revived, spoken at the ceremony.

“They are the shoulders we stand [on] today … to say ‘you weren’t forgotten about, we’ve done everything we can in order to bring you home from around the world’ … that’s pretty emotional.”

A shift in museum culture

New Zealand, like all colonised countries, has a painful history with stolen and traded Indigenous remains. 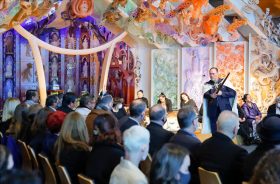 The repatriation is the culmination of 15 years of research and negotiations. Photograph: Hagen Hopkins.

From 1769 to the 1970s thousands of ancestral remains of Māori and Moriori were treated as tradable commodities, curiosities, and objects of scientific interest. The trade in toi moko (tattooed mummified heads) peaked between the early 1800s and 1820s.

But since the 1970s, New Zealand has a strong record of requesting those remains back from overseas. In 2003, the country created its first government-funded international repatriation program: Karanga Aotearoa. It has now seen the return of 800 Māori and Moriori remains.

Its manager, Te Herekiekie Herewini, said contact was made with the Natural History Museum in 2003 and it took until 2018 to come to an agreement. This is partly to do with the way the British government and its museums have considered ancestral remains, Herewini said.

“These remains were mere objects they could own, they could collect and they could transfer … so their policies reflected that: they were they owners of these skeletal remains and we needed permission from them for our ancestors to come home.” 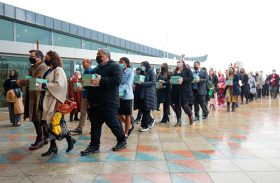 More than 100 remains were brought back from the UK’s Natural History museum. Photograph: Hagen Hopkins.

The Natural History Museum said the repatriation was an important moment, with its director Doug Gurr adding that the museum was committed to dialogue with governments and communities who wished to make a claim for the return of remains.

A global repatriation movement is now forcing cultural institutions around the world to challenge their notions of possession. In recent years, European museums have fielded requests from Egypt, Italy, Chile, Australia, Canada and Gibraltar, among others.

The Natural History Museum holds roughly 27,000 skeletal remains in its collection, of which roughly half are from outside of the UK. There are thought to be another 200 remains from New Zealand in its collection that are not part of this repatriation effort.

“We’re only one of a number of Indigenous people, so it takes quite a long time,” Herewini said, adding that the provenance and DNA of each needs to be assessed.

Karanga Aotearoa has another seven repatriation processes underway with overseas institutes in the US and Europe.

“At the end of the day, that institution decides what they want to do. We can just knock at the door and ask.” 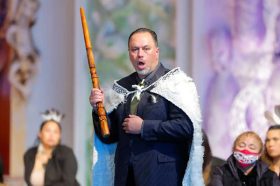 It is also a significant step for domestic institutions reckoning with their own colonial legacy in taking, trading and possessing ancestral remains.

Solomon, who attended the formal handover ceremony at the Natural History Museum in London last week, said the repatriation marked a shift in the way colonial cultural institutions recognised the significance of ancestral remains.

“These colonial institutions have certainly moved on from where they were 10, even five years ago … that’s a really positive thing.”

He praised Karanga Aotearoa for the “unremitting commitment and passion for this work” during the past 20 years, and the government for funding the work.

“I think it is rubbing off, and helping other institutions overseas see that this is the right thing to do.”