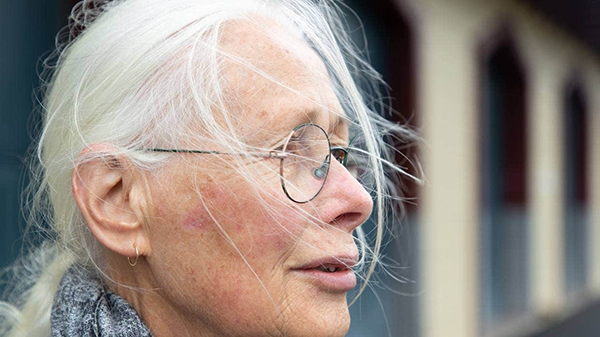 Dame Robin White has been described as one of New Zealand’s most visionary artists; so why hasn’t she been celebrated as much as many of her male counterparts?

Sarah Catherall, Why has it taken so long to celebrate one of our greatest artists?, Stuff, 22 May 2022

Some of her art is instantly recognisable. But while Dame Robin White has been quietly creating art for five decades, there is a perceived lack of national recognition.’

When the now 76-year-old began working as a full-time artist in the early 1970s, there were very few New Zealand women artists doing the same thing. For more than 50 years, she has worked full-time making art without a break – rare for a woman artist of her generation. The other thing which is notable about her work, according to curators and art experts, is that she has evolved and pioneered new styles and artistic approaches rather than sticking to a signature one.

While she is known and celebrated among curators, public galleries and collectors here, Masterton-based White is not a household name in the way that artists like Colin McCahon, Rita Angus, Ralph Hotere and Toss Woollaston have been. There hasn’t been a large, public exhibition of White’s art since 2002, nor a book written about her work for 40 years.

Finally, though, the septuagenarian artist will be thrown into the spotlight when a major national exhibition is held at Te Papa National Museum, before touring to the Auckland Art Gallery. Robin White: Something is Happening Here, will explore her celebrated 1970s portraits and Aotearoa landscapes – buzzy bees, suburban buildings and harbour cones – along with the ambitious collaborative works she has made with artists from across the Pacific and New Zealand in recent years.

Auckland art historian Linda Tyler curated White’s last public exhibition back in 2002. She thinks the survey show is long overdue, blaming the artist’s low profile on the fact she is a woman. Says Tyler: “Robin is a very significant artist in the Pacific whose work is collected by major institutions such as the Australian National Gallery in Canberra and the National Gallery of Victoria and if she was a male artist there would be dozens of books and major exhibitions about her by now.’’ 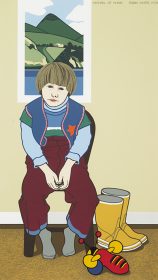 Her Wellington dealer, Olivia McLeavey, of McLeavey Gallery, agrees the national exhibition and renewed interest in her work is timely. White is at the peak of her career and still creating. Last year, she was commissioned by the Art Gallery of New South Wales to create a work for the Matisse Alive, Art Gallery of New South Wales, 2021-22. She also featured in Another Energy: Power to Continue Challenging – 16 Women Artists from around the World, at the Mori Art Museum, Tokyo, in 2021.

“Robin is very well-known and recognised in Australia. It’s surprising that New Zealand hasn’t had the same attitude. We are playing catch up and I’m pleased about that,’’ she says.

However, White has never been interested in fame or recognition and is renowned for her humility and lack of ego. Sitting in Te Papa to talk about the impending show, she realises the publicity is part of the job. When she was knighted in 2017 for her contribution to art, she accepted the honour on behalf of her parents. But she doesn’t like being called Dame Robin. “I much prefer to be called Robin,’’ she tells the Sunday Star-Times. 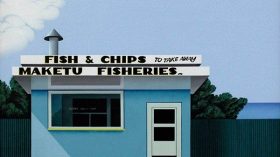 Asked how she feels about 70 works from her career being pulled out of 22 galleries and living rooms to be put on display, she shrugs her shoulders. She has called the exhibition “a family reunion’’. Once it is open, she will have the space to get back to what she loves most – creating the next work.

“At my age, you start to think, “How long will the energy last?’’ The years are ticking over and time starts speeding up.’’

White has created art in New Zealand, Australia, Kiribati – where she lived with her family for 17 years – Fiji, Tonga and Japan. All have influenced her life and work. More recently, she has been creating huge works on tapa of up to 25 metres in length. A big part of her work has been collaborating with other artists from the Pacific, an approach she prefers rather than working on her own. “The bounty of that is having that opportunity to develop greater relationships. I think of it as being liberating from the confines of self, of ego, because you have to give that up and put it to one side.’’

“Ego gets you into trouble, with other people and with yourself and your own work.’’

Of Ngati Awa and Pakeha (Celtic, Dutch, English) descent, White doesn’t want to be put in a cultural box, describing herself as “a happy fruit salad’’. Nor does she want to be labelled as a woman artist. If she was to describe what culture really influences her, it is her Bahai faith, in which she used to be a counsellor and now helps those in her Masterton community. In her art practice, she follows the faith’s principles of collaboration, equality and experiment. 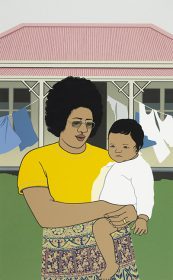 On that note, while White has close relationships with her dealers, she is scathing about the commodification of art – the art prices inflated by auction houses. Each of her latest works sold at McLeavey Gallery last year cost about $60,000 each, but she doesn’t care about that. What she wants is for her art to be enjoyed. She smiles talking about the earliest screenprints of the Paremata boatsheds which she sold in the early 1970s for $4 each.

“When you buy something for $4 you don’t treat it as super precious. I just want people to have it. They were pinned up on the wall and they had pretty crappy inks.’’

“The reason why I did screenprints is that I could sell several for cheap and people could have them and they weren’t precious. They faded into oblivion.’’

“The commodification of art is at a very unhealthy level. It affects the way in which quality is perceived. The idea that art must be good because it’s just fetched x dollars. It could be fashion, it could be the name, it’s the way the auction houses pump things up. It’s a very unhealthy scene. Why is something desirable? Why do you want to own this thing?

“There’s a lot of showing off. Self-aggrandizement by being surrounded by this and that.’’

Grace Ridley-Smith, also a dealer at the McLeavey gallery, talks about White’s Bahai faith which guides her and influences her approach to art. She is an artist with integrity.

White is also respected for making art head of her time. Olivia McLeavy says: “(In Kiribas), Robin began doing things that were unpopular and unfashionable. It was the eighties and nineties. New Zealanders wanted the buzzy bees, and she was giving them woodblock prints. She was doing very interesting work in an interesting way, but people said: “What the hell is she doing?’’

“Then the tide did slowly turn.’’

McLeavey describes White as a visionary artist who constantly evolves her practise and never sits still. “To be in her seventies, to suddenly completely change tack and to completely change material and to work at the scale she is working at now is massive. She’s making these huge 4.5 metre by 4.5 metre works. She’s a very exciting artist because she keeps innovating, she keeps pushing.’’

Nina Tonga, a Te Papa curator who co-authored the book and co-curated the exhibition, admires White’s longevity as an artist, and her energy to keep creating. White recognised and celebrated New Zealand’s identity as a Pacific island long before others did. “What we celebrate about Robin is how she has changed her practice over time. She has a wonderful way of thinking her best work is still ahead of her.’’ 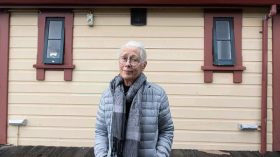 There’s a lot of showing off about art, says Dame Robin White: “Self-aggrandizement by being surrounded by this and that.’’ Ross Giblin.

Home is Masterton, where White continues to make art in her home studio. She lives there with her husband of 50 years, Michael Fudakowski. She has three adult children and four grandchildren. It is difficult to choose favourite works, but she points to a series published in the book, Sainimele and the Fisherman, four 280 mm x 140 mm woodcuts she created in Kiribati in 1995.

White points to the Kiribati fisherwoman, Sainimele, appearing in four works. “She’s got a purpose in her life which is to go fishing. As she’s doing that, she’s noting what he’s doing – the fisherman is drunk, and trying to stab himself. He’s a mixed up bloke, mixed up with alcohol. It’s a metaphor for what is going on everywhere in society. What I was commenting on here is a microcosm in society – a process of growth and learning and positive vision and outlook, a life of service with positive outcomes. The other is a process of decline, which will end in nothingness and is destined to fade. Side by side. It’s a question of choice. Make your choice. Which path are you going to choose? A process of growth or a process of decline?’’

In the book, White talks about the challenges we face as a society. When she works with artists of the Bahai faith in Auckland and Tonga, she respects and appreciates their diverse cultural knowledge. “More and more, we are being required to know what are the implications of living in a society that is increasingly diverse, through the arrival of immigrants from all walks of life and very different parts of the planet. I would like to think that our work is a tangible example of what people can achieve when they work together,’’ she says.