You are here: Home » Articles filed under: 'News' » Article: 'Te Papa’s Nina Tonga on a Single Object & the'

Te Papa’s Nina Tonga on a Single Object & the 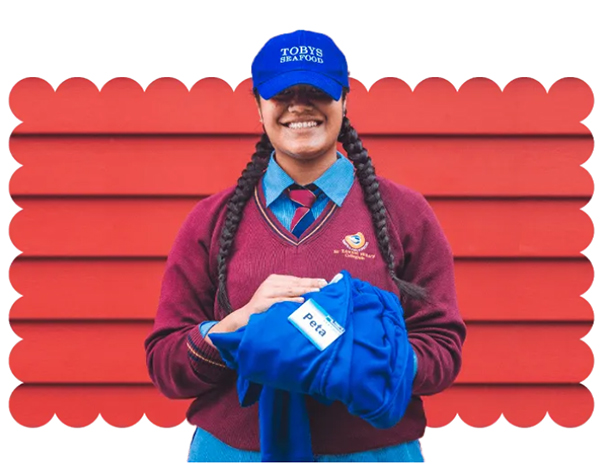 Nina Tonga, The Single Object: A cultural history of the Toby’s Seafood uniform, The Spinoff, 19 July 2022

The Single Object is a series exploring our material culture, examining the meaning and influence of the objects that surround us in everyday life.

On recent trips home to visit my parents I have been tackling that drawer of stuff that I have promised for decades to clear. Among the high school reports and university course readers, I couldn’t get past my scrapbook-like diaries bulging with letters, Stagecoach bus tickets and photos. Flicking through the pages of my seventh form diary I was confronted with my teenage obsession with recording my life as if I was worried I was going to develop amnesia the minute I left high school. I recorded EVERYTHING: who I spoke to on the phone, how I felt after watching Dawson’s Creek, my (never-ending) love of Keanu Reeves, and the pantheon of hot guys I never spoke to at the Newmarket bus stop. Revisiting this time capsule made me think about what it was like to grow up as a Tongan in East Auckland and how this Collins A5 diary had, at one point, been my most treasured possession.

It was the absence of these kinds of material histories and youth narratives in Te Papa’s Pacific Culture’s collection that inspired our 2017 youth-focused co-collecting project. Project 83: Small Things Matter was one of three co-collecting projects designed to build Te Papa’s Tongan collections by sharing our curatorial authority with members of Tongan communities in Auckland. The project was a collaboration with the Year 13 Tongan language class at Sir Edmund Hillary Collegiate in Otara, Auckland, and their teacher, the incomparable Mrs Maata Fusitua.

Our desire to collaborate with the Tongan community was heavily influenced by the pioneering Vanuatu Cultural Centres Fieldworker Network, which has been running for more than four decades. We took inspiration from their network of over 100 volunteer ni-Vanuatu fieldworkers who are actively documenting their own cultural knowledge and kastoms. In a similar fashion to the fieldworkers programme, we brought Year 13 Tongan language students to Te Papa for a two-day intensive workshop to design and name their co-collecting project. Part of the workshop included back-of-house tours through the Pacific Cultures collections, where we shared with the students treasures of our Tongan collection including the late, great Bill Sevesi’s electric-blue lap steel guitar. We also tried to demonstrate the breadth of our collecting by taking them into the history collections and showing them objects such as the Desert Disruptive Material uniform that belonged to Corporal Willie Apiata VC. 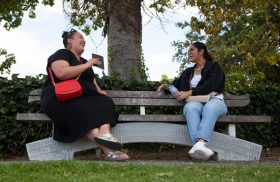 Nina Tonga and Elisapeta Fononga, one of the students who participated in Project 83: Small Things Matter (Photo: Ane Tonga)

In the end, it was a simple object in our collection that catalysed their project: a small conus aureus shell donated to Te Papa by Kupa Kupa, a member of the Tokelauan community in Porirua. For Kupa, this humble shell collected in 1989 along the edge of the lagoon of Fakaofo atoll represented his connections to his homeland. Hearing the powerful story of this seemingly ordinary object inspired the students to subtitle their project “Small Things Matter”. Kupa’s shell modelled for the students the potential for museums to be sites where their “things”, big or small, mattered. Through this shell they could see themselves and their “things” having a place in the museum alongside the most valuable Tongan objects such as ngatu (tapa cloth) and kie (fine mats).

Over several months, we spent time with the self-described “youth agents” in their classroom, and met their parents and fellow teachers as they undertook the task of writing themselves into our museum collections. As museum curators, these visits opened us up to their stories and the dynamics of their home and school lives: Polyfest, speech comps and NCEA assessments. Like us, they shared our curatorial burden of cultural representation and their own preconceived notion of what museums collect and value. To counter this, they asked themselves: “What does growing up Tongan in Ōtara look like for me?” Together, their final collection of over 30 objects painted a diverse picture of youth experience: class photographs, first bibles, brass band jackets, a first trumpet handed down through family, an original song and a ta’ovala worn on a sweet 16th birthday.

Among the array of objects was a Toby’s Seafood work uniform comprising a cap, T-shirt, hoodie and name badge with the name “Peta”, belonging to Elisapeta Fononga. Toby’s Seafood is a New Zealand-owned business that operates five stores across Auckland, in Ōtāhuhu, Massey, Glen Eden, Manurewa and Glen Innes. Toby’s is an institution. They are renowned for their fresh fish and shellfish and I can’t say enough about their raw fish and fry bread. Elisapeta worked part-time at Toby’s Seafood Ōtāhuhu for four years starting as a Year 9 student in 2013. Her mum previously worked for Toby’s at the Ōtara market and was able to get Elisapeta and her cousin part-time jobs.

One of nine children, Elisapeta moved to New Zealand from Tonga with her family in 2006, when she was six years old. At an earlier point of the project she had considered giving us her first ever photograph – not the usual family snap we had expected but rather a standard passport photo for her immigration documents. Although we were excited at the prospect of the passport photo, Elisapeta’s final choice of her work uniform also carried her migration narrative as a young Tongan woman. As one of the only students in her class that held a part-time job, her uniform serves as a powerful object that speaks to the agency of young people and the contribution they can make to their families, our workplaces and our country. 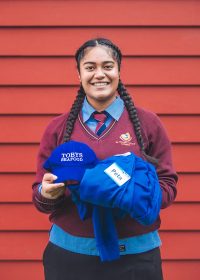 Elisapeta’s sense of responsibility to contribute to the aspirations and collective success of her family is evident in the NCEA Level 3 essay she wrote to accompany her uniform:

“Growing up and seeing my parents struggling with their finances to help provide for our family motivated me to work. I was so impatient that I begged my mum for a part-time job, which led to me working at Toby’s Seafood.”

At this, her first part-time job, she worked long 12-hour days from 7am-7pm on the weekends, mostly at the cash register, helping out cooks and welcoming and hosting customers in the shop. Toby’s provided the free T-shirt and she had to pay for her remaining uniform – the jacket cost $17.50 and the cap was $20. She was getting paid what was then the minimum wage of $15.75 per hour. Writing candidly, Elisapeta shared some of the hardships of juggling work and school: lack of sleep, arriving late to school and the ongoing challenge of keeping up with assignments. Yet, despite her personal struggles, her perseverance was part of a collective sacrifice. As she writes:

“I knew this would be difficult but it was the only way I could help my parents’ struggles and needs.”

I reconnected with Elisapeta in January this year and decided we should catch up at Toby’s Seafood in Ōtāhuhu for a walk down memory lane – and a feed of raw fish and fry bread, of course. Covid-19 had definitely changed things – under the red light setting there was no inside-dining – yet this didn’t stop the constant stream of people taking a number and waiting outside while their order was prepared for them. It was clear from the clusters of people patiently chatting and waiting outside that Toby’s Seafood is a central hub of the community. As a family-owned business, their role in the community is well known. During the lockdown in 2020, the owner of Toby’s Seafood, Patrick Tobin, supported Waipareira Trust to store and distribute over 250 tonnes of food to help West Auckland families in need.

This sense of community was immediately evident when it was our turn to enter the shop. After leaving school Elisapeta worked there on and off, and still knew many of the staff, including some from their schooldays at Sir Edmund Hillary Collegiate. Walking in with Elisapeta, we received a warm reception from the employees; it felt like we were in a family kitchen rather than a business. For many of her former co-workers, Elisapeta’s uniform also represents their stories and their collective pride in their work and workplace. After RNZ published a story about her uniform in 2018, Elisapeta recalls arriving at work and being met with hugs and kisses from her co-workers, thanking her for sharing her story through her uniform. She also received messages from the owners of the family-owned business who were also moved by her story.

Elisapeta still remembers her shock at their response to her story. “I didn’t think it was going to be this big,” she says. It was all the more surprising since during the co-collecting project she’d doubted that her uniform would be “good enough” or that it would be counted as “Tongan stuff”.

Elisapeta’s royal blue work uniform is Tongan stuff. The one she donated to Te Papa was actually one of her brand new uniforms that she had yet to wear to work – she gave us her best.

Elisapeta’s story, told through her work uniform, creates a foundation for Te Papa to continue to tell the stories of the working lives of young Pacific people. It’s a mission that will become increasingly important. Treasury’s Pacific Strategy 2022-2025 estimates that in 15-20 years one in five children will be Pacific; in the workforce, one in eight will be Pacific. These projections also signal to us as museum curators that there will be more youth stories to tell. Elisapeta’s work uniform will stand in for the story of her family, her colleagues and those that are yet to come. Her uniform holds pride of place in our collection, alongside those of her fellow youth agents, as an example of the role Pacific communities have at the museum to shape our collections and the stories we tell.

The Single Object is a writing series exploring our material culture. It’s brought to you with the support of Objectspace, New Zealand’s leading public gallery dedicated to the fields of design, craft and architecture.