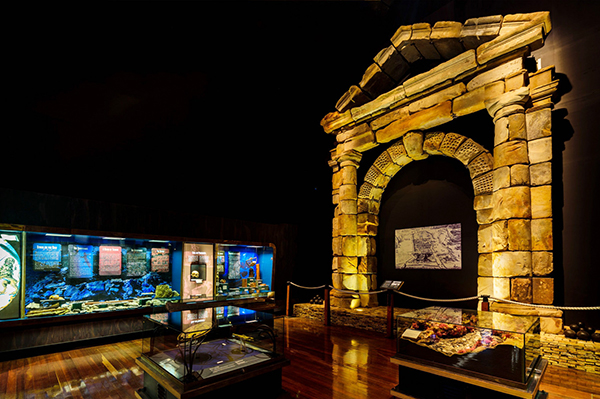 A joint Indonesian-Australian exhibition uses historical objects to rethink the ties and connections between the two countries, as well as their colonial histories.

The intricate, earth-colored patterns on the cloth looked like the motifs of Australia’s indigenous Aborigine people. Displayed in the Jakarta Textile Museum, the white-and-reddish-orange symmetrical triangles typically take the shape of crocodiles, kangaroos or rainbow serpents in their dreamtime traditional beliefs and mythology.

While the work evoked the Australian outback, its title Yirrkala Batik showed an Indonesian influence.

“The Yirrkala Batik is an interpretation of bark paintings made by [Australian Aboriginal artist] Ronald Nawurapu Wunungmurra […] which tell the story of Makassar [Bugis] sailors who visited Arnhem Land [in Northern Australia],” said Jakarta Textile Museum curator Ardi Hariyadi of the 2 meters by 1 m work.

The work was created by the Yirrkala Arts Center in Arnhem Land and the Galeri Buana Alit batik manufacturer from the city of Pekalongan, Central Java. He added that the Yirrkala Batik’s triangular-shaped motifs represented the sails of a Bugis ship sailing to Arnhem Land.

“Since ancient times the Bugis people […] sailed to northeastern Australia in search of sea cucumbers and interacted with indigenous Australians,” Ardi asserted.  He added that Yirrkala Batik, which was a gift from the Australian Embassy in Jakarta to the Jakarta Textile Museum in 2015, and other artifacts, reflected the Bugis’ age-old maritime proficiency. 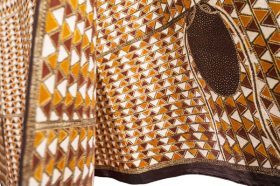 Ruling the waves: A detail from the Yirrkala Batik recalls the impressions Bugis seafarers made on the Aborigines of northern Australia. (Courtesy of AIM Project)

As an artistic collaboration between Indonesia and Australia, Yirrkala Batik is one of the exhibits featured in Tetangga: People, Places and Objects, a joint online exhibition held by the Australian and Indonesian governments.

“Traditionally, [museum] exhibitions have been developed through a national frame-of-reference, but more recent approaches are exploring transnational connections of people, objects and ideas,” he said during the Tetangga exhibition’s online launch on June 17.

“[The AIM Project] has developed new approaches to understanding how these histories are collected, displayed and interpreted in Australian and Indonesian museums.” 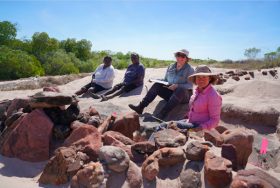 Most of all, AIM Project’s primary goal for Tetangga is to touch on “any objects and stories [that] illustrate the historic and contemporary connections and flows of people, ideas and objects between Australia and Indonesia”.

Similar to Yirrkala Batik, these include archeological artifacts related to the Buginese mariners who inspired the work.

“Ceramic shards and metal artifacts [including a fish hook and lead musket ball] found at fishing camps in northern Western Australia show the movement of Indonesian[s] including Makassan seasonal fishers across the region. This archeological collection comes from Tamarinda, Low Island and Klembei [from] the Kimberley [region],” said the AIM Project of the innocuous-looking artifacts left by Makassan or Makassar fishermen from Indonesia’s South Sulawesi province.

Archeologists from Western Australian Museum and the University of Western Australia have excavated the site since the 1960s. Their findings “revealed hearths and smokehouses possibly for the preparation of trepang [sea cucumber, thelenota ananas]. Based in part on an 1823 Dutch coin, the camp was dated between 1825-1850.”

The artifacts included earthenware and Chinese porcelain, as well as “cooking pots brought to Napier Broome Bay onboard Asian boats or praus [that] have been reconstructed from ceramic shards found or excavated on shore. Mineral analysis of the clay has revealed Foraminifera fossils [marine species] and silicate, suggesting these vessels were made in island Southeast Asia from coastal and beach sediments.”

The Yeidji or Kwini Balanggara aboriginal people of Western Australia helped out with the dig and reconnected with the Museum’s artifacts as they did so.