You are here: Home » Articles filed under: 'News' » Article: 'The Hermitage Dir’s views on Ukraine war &' 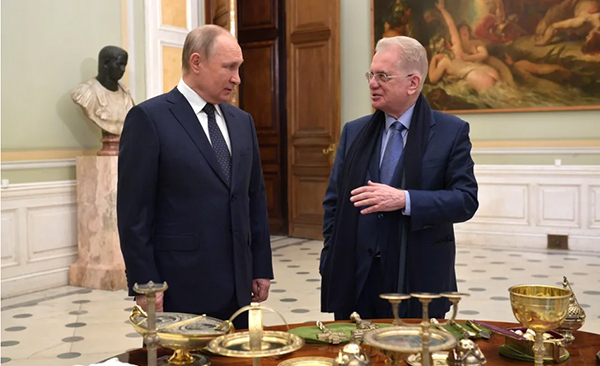 Sophia Kishkovsky, ‘No one can interfere with our offensive’: Hermitage director Mikhail Piotrovsky compares Russian export of culture to country’s ‘operation’ in Ukraine, The Art Newspaper, 25 June 2022

St. Petersburg museum also announces “a one-year moratorium on exhibitions in Europe and the US”
After Russia invaded Ukraine on 24 February, Mikhail Piotrovsky, the director of the vast State Hermitage Museum in St. Petersburg, spoke of the importance of cultural bridges and made sure major loans avoided seizure and were returned to Russia. He spoke out against the cancellation of Russian culture but avoided direct references to the war, even as museum partners and international supporters suspended ties.

Four months later, Piotrovsky—who has long enjoyed the favour of President Vladimir Putin—has opened up about the war. In an interview published on 23 June in the Russian government’s official newspaper Rossiiskaya Gazeta, he begins by using the official terminology for the invasion: “special military operation”.

Piotrovsky goes on to describe Russian culture as an important export, similar to the country’s war in Ukraine. “Our recent exhibitions abroad are just a powerful cultural offensive. If you want, a kind of ‘special operation’, which a lot of people don’t like. But we are coming. And no one can be allowed to interfere with our offensive.”

Using comparisons to historic wars, the museum director then explains why Russians must support the current war in Ukraine. “Right now our country has made the transition to a different time,” Piotrovsky said. “The first period of the Scythian war has come to an end. We retreated and retreated, now we are no longer retreating. A turn has been made. And it’s already clear that is the final turn. It all began in 2014 in Crimea.”

Piotrovsky casts the transformation in epochal terms, with the museum as an island of stability. “Our country is carrying out great global transformations,” he said. “And we, accordingly, are part of them and with her. Our position is one of calm, normal work.”

When the Rossiiskaya Gazeta interviewer expressed doubts about a pacifist position, Piotrovsky agrees. “We are all militarists and imperials,” he laughed. “First and foremost, it is my country and I must be with it. I sometimes repeat the jingoistic formula: this is my country, whatever it may be like. There are situations when it is absolutely clear that a person should be with his country. And in the West they understand that these are all real things—that we are with our country. When a very serious issue is being resolved, there are no other options.”

Piotrovsky said he now understands the patriotic fervor of 1914 that greeted the First World War, and the role of culture, and segues into parallels with the poet Alexander Pushkin’s depictions of the Russo-Turkish War of 1828-29. “I always say that patriotism in Russia is a sense of one’s own historical dignity,” he said. “The desire to live up to the history and mission of one’s country. It sounds very grand, but we understand the historical mission of our country. And this sense that our country is changing world history, and you are involved in this, is key now.”

The museum director also addressed specific issues in Russia’s and the Hermitage’s relations with the world. “I have the feeling that the Soviet Union, with its ideological dictates, has spread to the West,” he says. “I never expected that I would read in liberal Western newspapers: ‘The Hermitage is an imperial museum, preaching imperial ideology, keep it out! Do not under any circumstances allow the Hermitage to open in Barcelona!”

Efforts to open a Hermitage satellite museum in Barcelona met with resistance long before the invasion.

Piotrovsky then traces the West’s desire to cancel Russian culture to the “culture of guilt and repentance for guilt” of the Black Lives Matter movement. “It’s already a bit laughable: how much can you repent for that terrible colonialism about which things are not at all clear. Or for the unfortunate slave trade, which after all began not in Europe, but in Africa,” he said. “And they, it seems, already themselves began to sense that this is a dead end, and suddenly Russia turned up. And please: let’s ‘cancel’ Russia. Although the joy with which they rushed to condemn us, tear up and expel us, again says that we are strong in culture.”

He criticised the Bizot Group of top museum directors, which suspended the membership of Piotrovsky and other Russian museum directors, calling it laughable since he was a founding member and the purpose was to encourage cultural exchange without a political subtext.

Piotrovsky spoke of Russian culture being in some ways more European than that of European countries such as Norway, and describes the blockbuster exhibitions there as a “cultural offensive” and even a “kind of special operation”. In terms of guaranteeing the safe return of the Morozov collection exhibition from France, he says that Fondation Louis Vuitton turned out to be “a much better partner than state institutions” since returning the works was a matter of honor for them.

He described being “stabbed in the back” by former international partners such as “friends of the Hermitage” who “suddenly broke ties,” and singled out the Hermitage Museum Foundation Israel for remaining loyal.

“We see everything now. We see that there are people who break relationships, but suffer from it and cry. And there are those who gladly took advantage of this opportunity. Apparently, they were friends solely for political reasons. Now we have a good ‘black list’ of journalists and politicians. And this is very important. The world has all kinds.”

On the same day as Piotrovsky’s interview was published, the Hermitage announced on its website that is introducing “a one-year moratorium on exhibitions in Europe and the US.”