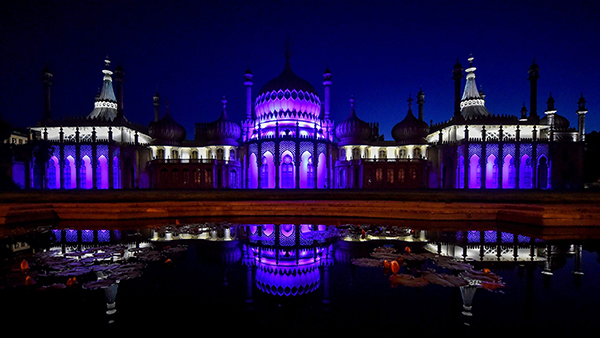 The Royal Pavilion in Brighton was lit up in purple last night to mark the Queen’s death Pictured during the Platinum Jubilee celebrations earlier this year (c) Brighton & Hove Museums.

Museums and galleries have been paying tribute following the death of Queen Elizabeth II.

Historic Royal Palaces closed its six sites to visitors today to mark the passing of the monarch. In a statement, the organisation said: “As a mark of respect, all our sites will be closed to visitors tomorrow as we join the rest of the country and the world in reflecting on Her Majesty The Queen’s incredible contribution and enduring legacy.”

The Tower of London and Hillsborough Castle in Northern Ireland will have a ceremonial role during the period of national mourning and will host gun salutes today.

Nicholas Serota, chair of Arts Council England, acknowledged the Queen’s support for arts and culture. He said: “As an organisation established by Royal Charter in 1946, we want to express our immeasurable gratitude to Her Majesty The Queen for her support for the arts and culture sector over so many years, which included her patronage of many cultural organisations.”

Brighton’s Royal Pavilion was illuminated in purple lights last night following the news. Brighton & Hove Museums said it was “deeply saddened” by the death of the Queen. It said: “We have been fortunate to welcome her to the Royal Pavilion on several occasions in 1951, 1962 and 2001. We were happy to share the work we do with her and to show her around our historic former royal palace.”

Laura Pye, director of National Museums Liverpool, said: “It is with great sadness that we have received the news of the death of Her Majesty, The Queen. National Museums Liverpool had the great honour of welcoming Her Majesty on various occasions; from the launch of a special exhibition area at the Walker Art Gallery (2002), to the opening of the Museum of Liverpool (2011) and lunch at the Merseyside Maritime Museum (2012), we were honoured to share the breadth of our work with The Queen.

“On behalf of the organisation, I would like to add our sincere condolences on this sad day.”

London’s Black Cultural Archives said in a statement: “Black Cultural Archives wishes to express its sincere condolences to all members of the Royal Family for the loss of Her Majesty The Queen Elizabeth II. We stand together with the nation in mourning, reflecting on the Queen’s long and distinguished career of service.”

Many museums are giving visitors a space to record their condolences and memories of the Queen. Dorset Museum is collecting memories in a book in its community space throughout the national mourning period. The book will then become part of the museum’s collection.

The Cabinet Office has issued guidance on how organisations may observe the 10-day mourning period, which will include a day of national mourning on the day of the state funeral. This date has not yet been confirmed by the Royal Family but is rumoured to be Monday 19 September.

The guidance states: “Public museums, galleries or similar venues are not obliged to close during the national mourning period. Organisations may choose to close on the day of the state funeral, however there is no obligation to do so and this is at the discretion of individual organisations. As with other organisations, these institutions may wish to display or share images of previous royal visits, particularly if they are one of Her Majesty’s patronages.”

The guidance also covers how businesses and organisations may observe the mourning period. It says there is no obligation to cancel or postpone events, but that “as a mark of respect, and in keeping with the tone of national mourning, organisers may wish to hold a period of silence and/or play the National Anthem at the start of events”.

For organisations wishing to hold commemorative events, the guidance states: “Local authorities will support the coordination of local events so please check with them or your local place of worship for further details.”

For organisations seeking to open a book of condolence, the guidance states: “There is no set format for a book of condolence. The layout of the table is usually a trestle table on which the book is placed with a white tablecloth, an arrangement of flowers (usually lilies or other white flowers) and a framed formal photograph of Her Majesty. This could be an official portrait photograph, or one taken at a previous Royal visit. 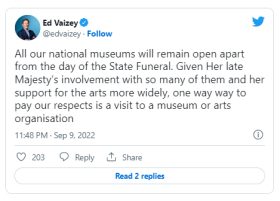 “As a mark of respect, a black ribbon could be wrapped around the top right hand corner. Please note the Royal Household and the government will not be able to receive books of condolence.”

National museums will remain open apart from the day of the state funeral.

In a statement, Imperial War Museums (IWM) said: “As a mark of respect, it has been decided by the trustees and executive board of IWM to close our five branches on the day of HM The Queen’s state funeral, which will be announced by the Royal Family in due course. This decision was taken in consultation with the Department for Digital, Culture, Media and Sport.”

Guidance has also been issued for organisations wishing to half-mast flags or hold silences.