You are here: Home » Articles filed under: 'News' » Article: 'US local libraries a political & cultural'

US local libraries a political & cultural

September 8th, 2022 | Browse other: News. | Tagged with: Local libraries have become a major political and cultural battleground, The culture war inside America's libraries | 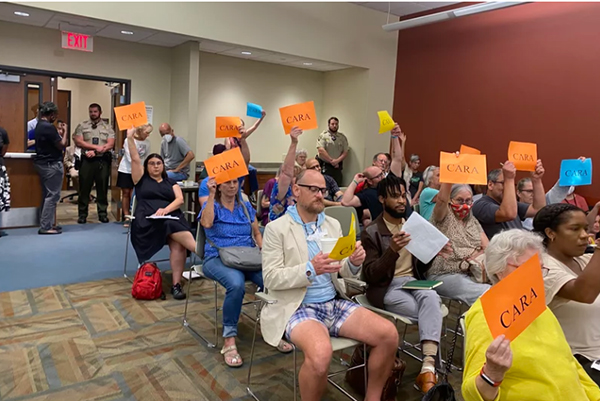 Anti-censorship protestors at a meeting of the Lafayette Library Board, defending a librarian who included queer teen dating in a book display in defiance of the board. John Burnett/NPR.

The August meeting in Lafayette was fairly humdrum — routine reports on the bookmobile, library hours, and plans for a new branch — until the lectern was opened for public comments.

“Everything that has happened in the past 18 months with this board and to the library has basically been a dystopian nightmare,” declared one unhappy library patron.

Since conservatives took over the Lafayette library board last year, the controversies have come fast and furious:

“Hold up your signs for Cara again,” one speaker told the audience. “We don’t support fascism in the Lafayette Public Library.”

Lafayette Parish is deeply religious, conservative Trump country — red as a boiled crawfish. So others in the community have applauded the board’s rightward shift.

“I’m a father of four young children,” said a man in a tie and blue blazer, “and my daughter found a cartoon book that was basically pornographic. It encouraged children to explore themselves in a variety of ways. It was in the children’s section.”

The father concluded, “These are local libraries which should reflect the prevailing local community standards.”

For many critics, this is the crux: whose community standards?

A somber librarian named Connie Milton stepped up to the podium and explained that libraries are struggling to keep pace with societal changes that emphasize the inclusion of diverse genders, races, and sexual orientations.

“We just want everybody to be able to come into a library and see themselves represented. That’s all we’re doin’,” she said to hearty applause.

Milton announced that she had just given her two weeks’ notice.

“Morale is not good,” she said. “People are afraid to lose their jobs.”

Lafayette Parish is by no means unique. Across America, fractious debates over free speech in public and school libraries have turned these hushed realms into combat zones. Cops are regularly called to remove rowdy protestors.

Texas leads the country in book bans. In the towns of Katy and Granbury, uniformed peace officers came into school libraries to investigate books with sexual content after criminal complaints from citizens. And the school district in Keller, Texas, pulled 41 challenged books off its shelves, including a graphic adaptation of “Anne Frank’s Diary,” “Gender Queer: A Memoir,” and the Bible.

Traditional-values groups are demanding the removal or restriction of books with explicit sex education, and books that unflinchingly document LGBTQ realities and the Black American experience. The American Library Association — in its unofficial tally — reports that challenges of library books have jumped fourfold, from 416 books in 2017 to 1,597 book challenges in 2021.

In Lafayette, the president of the library board is Robert Judge, a retired insurance claims adjustor and high-school science teacher, and a devout Catholic. He gets criticized for imposing conservative church teachings on library policy, for instance, regarding LGBTQ topics.

“I think the idea that I have to drop off my Catholic Christian worldview at the door when I walk into serving the public is silly,” he said in an interview at his kitchen table.

Judge believes the library’s mission should submit to a traditional notion of family values and community standards, not the other way around.

Judge sought to have several books banned outright, but the board didn’t go along with him. As a compromise, the library moved all 1,100 nonfiction books from the young adult section to the adult collections. No books have been banned, says Danny Gillane, director of the Lafayette Public Library System.

“I don’t care if they [the board] want to censor the library, if I don’t have to remove things from my collection,” he said. “That is my goal is to keep all of the materials we have in the library.”

But some critics consider making a book harder to find is a form of censorship.

“We don’t need to refile it in another section like it’s something shameful,” said Christopher Achee, parliamentarian with the Louisiana Library Association.

“We encourage you as a parent to know what your child is reading,” he said. “That parent has every right to tell that child, ‘No, this isn’t appropriate for you.’ But that right ends when another parent comes in looking for that exact same information.”

The changes at the library since conservatives took over the governing board have infuriated liberal patrons.

“We’re really upset that the library is being used in the culture wars,” said Jean Menard, a home-school mom who says she depends on Lafayette libraries for her two teenagers’ education. Menard started an anti-censorship Facebook group, Supporters of Lafayette Public Libraries. The group has more than 2,000 members.

“It is not the board of control’s position to micromanage the library,” she said. “Librarians need to be able to manage the library. This is a public library. It’s for everyone. [If] they don’t like the programs or materials, don’t attend, don’t check out the material!”

That argument has gone nowhere with conservatives on a crusade to cleanse Louisiana libraries. Standing in their way can have severe consequences. 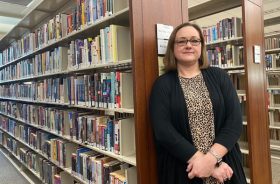 Amanda Jones, president of the Louisiana Association of School Librarians, made a speech against censorship and now she says she’s hounded by conservative activists on social media who say she advocates pornography.
John Burnett/NPR.

Last month, a middle-school librarian named Amanda Jones stood up and spoke out against censorship at a meeting of the library board where she lives and works in Livingston Parish, near Baton Rouge.

“The citizens of our parish consist of taxpayers who are white, black, brown, gay, straight, Christian, non-Christian — people from all backgrounds and walks of life,” she said in prepared remarks. “No one portion of the community should dictate what the rest of the citizens have access to.”

She concluded, “Hate and fear disguised as moral outrage have no place in Livingston Parish.”

Though 19 other people spoke up against censorship at the meeting, Jones’s speech got all the attention. She’s won several national Librarian-of-the-Year awards and is currently president of the Louisiana Association of School Librarians. But she was completely unprepared for what happened.

“A few days later,” she said, “I open the internet and there were pictures of me, awful memes, saying I advocate teaching erotica and pornography to 6-year-olds. It gave my school’s name. None of that is true. I gave a blanket speech on censorship. And they decided they wanted to make me a target.”

“They” is Citizens for a New Louisiana — the same group behind the conservative takeover of the Lafayette library board. The group has harshly criticized Jones on its Facebook page — which has 19,000 followers — for defending books they consider obscene and inappropriate for children.

Michael Lunsford is director of Citizens for a New Louisiana, which he describes as a government accountability group.

In his office in Lafayette, he pulls out one of the controversial sex-ed books, “Let’s Talk About It: The Teen’s Guide to Sex, Relationships, and Being a Human.”

“Any reasonable person who looks at this material I hope would say an 11-year-old doesn’t need to see this,” he said. 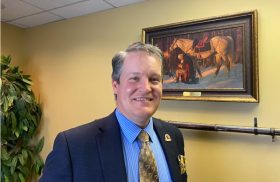 Michael Lunsford, director of a conservative citizens group, has pushed to remove graphic sex education books they consider inappropriate for children, and he says anyone who disagrees with him is promoting smut. John Burnett/NPR.

In ultra-conservative Louisiana, sex education in public schools, grades 7 to 12, is at the discretion of the local school board, with an emphasis on abstinence until marriage and no discussion of abortion or homosexuality.

But why attack a librarian for a book that’s in her library? Is defending a graphic sex ed book the same as promoting smut?

“I don’t know that we attacked her personally,” Lunsford said. “We asked a question: What type of influence does she have over what our children see in school libraries as the president of the association? I think that’s a valid question.”

In the current toxic political climate, school librarian Amanda Jones says she has begun to fear for her life. When asked how the social media onslaught has affected her, she broke into sobs.

“It’s horrible. My anxiety is through the roof. I live in constant fear that some person that they’ve incited is going to come and get me or get my child. Or come up to the school where I work and harm a child. It’s been a month of this and it just won’t stop.”

Last week, Amanda Jones sued Michael Lunsford, Citizens for a New Louisiana and a local individual she says is trolling her. The lawsuit asks for a state district court judge to issue a temporary restraining order to stop what it calls the harassment and defamation.

Meanwhile, with their successes in Lafayette, Lunsford’s group plans to expand its campaign to purge library books and programs that it finds offensive in Louisiana’s other 62 parishes.