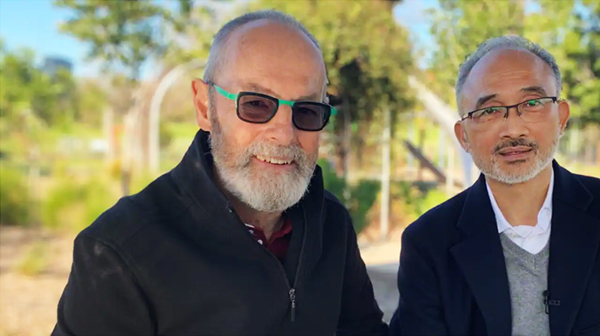 More than four decades since Hanh Do’s refugee application to settle in Australia was approved, he remains just as grateful as he was that day.

In 1981, Hanh Do walked into a meeting with an Australian immigration official in a Malaysian refugee camp. It was a moment that would shape the rest of his life.

He had just fled his home in Vietnam – six years after the communist government took over the country following the end of the Vietnam War – and Mr Do would find out his refugee application to come to Australia was successful.

It was approved by Lachlan Kennedy, who was working for the Australian government as a selections officer in the camp.

Now, 41 years later, the pair have been reunited for the first time, after being contacted by researchers.

“It’s amazing, I couldn’t believe one day I could meet him,” Mr Do said. 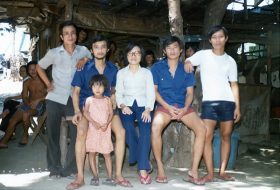 Hanh Do (second from the left) with his family at the Pulau Bidong refugee camp in Malaysia in 1981. Credit: Hanh Do.

Mr Kennedy said it was a gratifying moment.

“I think I probably interviewed over 500 people on the island – I had a bit of a reputation for being a yes man.

“It is so rewarding to know that people I selected have had a successful life in Australia – that’s what it was all about.”

A treacherous journey many didn’t survive

Hundreds of thousands of people fled Vietnam after the war, but many didn’t make it to their destination.

Hanh Do and his wife tried five times before they finally made it onto a boat, leaving behind their parents and siblings.

“It was only an 11-metre-long riverboat with 56 people on it – there was no way it was seaworthy,” he said.

“The first couple of days the sea was calm.”

But after those first days, their quest for freedom quickly turned into a nightmare. 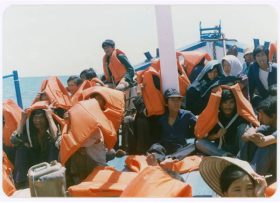 They were hijacked by pirates on three separate occasions.

“The pirates took everything, anything they could see, anything that was valuable,” Mr Do said. “We were scared, we had nothing left.”

After about a week at sea and being lashed throughout the night by a fierce thunderstorm, they finally knew their ordeal was going to be worth it – the frightened refugees could see land.

“It was close to the morning, and we could see lights and we knew then we were safe,” Mr Do said.

“It didn’t matter where it was, we just needed to land somewhere. We were so desperate.”

It didn’t matter where it was, we just needed to land somewhere. We were so desperate.

They landed on a Malaysian beach and from there were taken to Pulau Bidong, a small island off Malaysia’s coast that was used to house thousands of Vietnamese refugees.

After a month in the camp, and following an interview with Mr Kennedy, Mr Do and his wife were granted visas to move to Melbourne.

“When we arrived in Australia it was like leaving jail,” Hanh Do said.

Mr Kennedy worked for the Australian government for three years during that period, when international delegations were sent to Pulau Bidong to process refugee applications.

“We were living in plywood accommodation, we had our own kitchen and our own cooks … there were people from Sweden, America, Canada … all the foreigners had this different lifestyle on the island [compared to those seeking asylum],” he said. 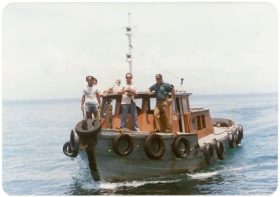 Mr Kennedy said it was a transitional moment in Australia’s history.

“In a way, it was the first time Australia recognised its geolocation as in Asia,” he said.

“We had people arriving by boat, some directly by boat in Australia, and for some people in Australia it was a challenging change, but it was very positive, I think. I am very proud to be a part of that.”

The previous government set Australia’s annual refugee intake at 13,750 for 2022-23 and announced additional humanitarian places for Afghan and Ukranian nationals amid crisis in their home countries.

But criticism continues amid calls for better treatment of refugees and asylum seekers today, particularly those whose applications are being processed in Australia and offshore.

Today, the Vietnamese community in Australia wants to preserve its history, while celebrating its culture.

It will be built in Footscray, west of Melbourne, a suburb where 10 per cent of the population is Vietnamese. 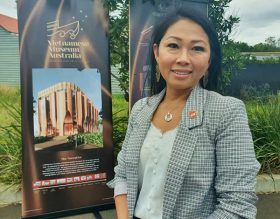 Tammy Nguyen volunteers with the Vietnamese Museum Australia committee and said it has been a dream of the community for many years.

“It’s to keep that history alive so the story doesn’t get forgotten and so future generations can have a place to go and see where their ancestors came from, and form their own sense of identity,” she said.

The façade will resemble bamboo, significant in Vietnamese culture, while the colour symbolises the red earth of Australia’s desert. The museum will have four levels, featuring exhibition spaces, a resource centre, and a shrine and memorial garden.