You are here: Home » Articles filed under: 'News' » Article: 'What does ANSTO do? – understanding atoms'

What does ANSTO do? – understanding atoms

May 19th, 2022 | Browse other: News. | Tagged with: ANSTO, Australian Synchrotron, Our understanding of the atom powers nuclear and accelerator techniques | 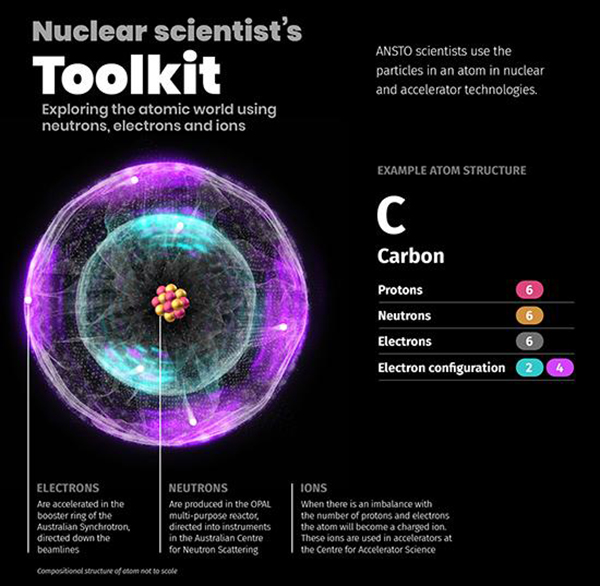 Our understanding of the atom powers nuclear and accelerator techniques, ANSTO, 12 May 2022

How do only 118 building blocks—all the known elements in the Periodic Table—combine to create every substance on Earth? How do these atoms make materials with a seemingly endless variety of forms and properties? Why do the same atoms connected in varying ways yield remarkably different materials? This quest begins with visualising atoms and their interactions.

Studying matter at the level of atoms and molecules requires measuring structures that are billionths of a metre (nanometres) or less in size. This nanoscale realm is where the fundamental properties of materials are established. Melting temperature, magnetic properties, charge, and even colour are dictated by the arrangements of atoms and molecules.

The ability to understand, design, and control these properties is leading to a new world of materials and technologies for numerous applications.

An atom’s typical size is tenths of a nanometre. The wavelength range of visible light is a few hundred nanometres, which is too large to detect atoms.

Seeing matter at the level of atoms requires instruments that can measure structures that are one thousand times smaller than those detectable by the most advanced light microscopes.

In order to characterise structures with atomic detail, scientists must use probes such as x-rays, electrons, neutrons and ions that are at least as small as the atoms being investigated.

The fundamental principle of materials research is that structure determines function. Advanced tools based on x-ray, electron, neutron beams and ions are providing atomic details of metal alloys, plastics, enzymes, superconductors, carbon nanostructures, and materials under extremes of temperature, pressure, and stress.

Seemingly minor changes in the positions and connections among atoms can yield materials with very different physical properties.

By tapping nature’s secrets for building matter atom by atom, nanotechnology researchers can design and build a new generation of nanostructures that outperform existing materials.

For nearly a century, x-ray beams have been the principal means of unravelling the identities and positions of atoms in crystallised samples ranging from relatively simple metal materials to highly complex biological molecules like proteins and DNA.

Due to their short wavelength, hard x-rays are very useful for probing atomic structure. Today synchrotron radiation, such as ANSTO’s Australian Synchrotron, produces x-rays so intense that they have vastly eclipsed historical methods and have given rise to scores of new ways to do experiments.

Crystallised samples of materials are analysed by passing x-rays through them. The x-rays are scattered by the atoms of a crystal, producing a diffraction image on detectors. This image provides unique information on the identity of the atoms and structure of the crystal.

Harnessing neutrons from a nuclear reactor

Unlike x-rays and electron beams that interact with a material’s electrons, neutrons have no charge and thus interact weakly with the electrically charged particles in materials. As a result, neutrons serve as non-destructive probes that can scatter directly off atomic nuclei deep within a material.

Neutron beams from research reactors, such as the OPAL multipurpose reactor, also can act like magnets, diffract like waves, and set particles within an atom or molecule into motion. ANSTO’s Australian Centre for Neutron Scattering operates fifteen neutron instruments. Analysing the neutrons that scatter off the sample reveals structural and magnetic information. Scientists worldwide use neutrons to study the arrangement, motion, and interaction of atoms in materials. As an important complement to x-ray diffraction and electron microscopy, neutron-based research provides valuable information that is not obtainable from other techniques.

Ion beam accelerators, such as those at ANSTO’s Centre for Accelerator Science, are a type of technology providing kinetic energy to charged particles called ions, which bombard a target sample – a material to be irradiated and subsequently analysed or improved. The target can be a thin foil or a piece of mineral, rubber, textile, tissue, soil or metal. The sample can be an object such as a painting, a statute, or a circuit. The structure, composition, age or other important properties of the material can be investigated using accelerator techniques.

They have various applications in areas as diverse as cultural heritage, biomedicine, forensics, food and agriculture, water and air quality, the development of advanced materials, radiation damage studies and solving challenges for industry.

In Part 2 we will explore in more detail how these techniques are used to provide useful information about matter.

Acknowledgement: Adapted from content provided by The Department of Energy (US) and the International Atomic Energy Agency (IAEA)