You are here: Home » Articles filed under: 'News' » Article: 'William Barak 1897 works purchased in NY by'

June 3rd, 2022 | Browse other: News. | Tagged with: Rare Aboriginal art to return to Australia after Victorian government chips in $500000, Two works from 1897 by Wurundjeri artist William Barak purchased at auction in New York. | 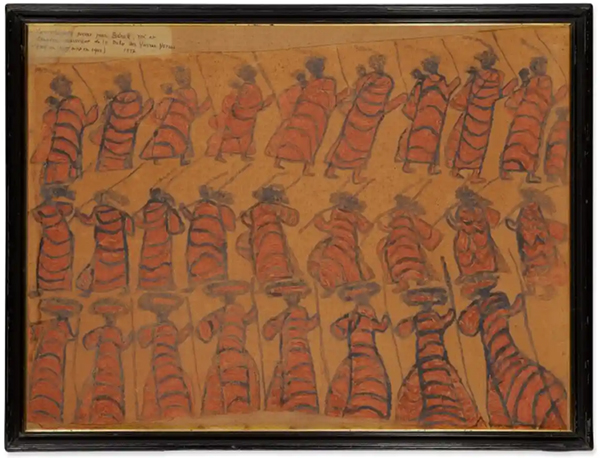 Corroboree (Women in possum skin cloaks) by William Barak. The 1897 painting sold at Sotheby’s in New York for more than $530,000 and will be returning to Victoria, Australia. Photograph: Sotheby’s.

Benita Kolovos, Rare Aboriginal art to return to Australia after Victorian government chips in $500,000 at last minute, The Guardian, 26 May 2022

The Victorian government has contributed $500,000 to secure the purchase of two rare artworks by Wurundjeri artist William Barak at auction in New York, in order to bring them back to the state.

The Wurundjeri Woi Wurrung Cultural Heritage Corporation had raised $117,627 via a crowdfunding page to buy the artworks – a painting and a parrying shield – which were being sold by auction house Sotheby’s in New York on Thursday morning, Melbourne time. 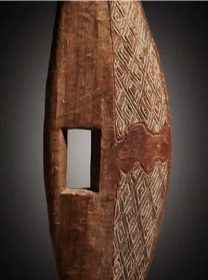 The parrying shield by Wurundjeri artist William Barak that sold for more than $74,000.
Photograph: Sotheby’s

The state government contributed $500,000 after a meeting with the corporation late on Wednesday night – a last-minute shift in the government’s position. Last week a spokesperson for Victoria’s Aboriginal affairs minister, Gabrielle Williams, told Guardian Australia the repatriation of significant Indigenous Australian cultural objects was a responsibility of federal government, and not a state matter.

The two artworks date back to 1897. Corroboree (Women in possum skin cloaks) depicts three rows of women wearing possum skin cloaks in a ceremony. The carved hardwood parrying shield is long and pointed with a geometric design and a unique motif at its centre.

Wurundjeri elder and descendent of William Barak, Ron Jones, told the ABC he watched the auction with tears in his eyes.

“I feel pumped, I tell you,” he said. “We brought an ancestor’s relic back to Australia where it belongs, and Uncle William Barak, what a tremendous man he was.”

While Barak’s artworks are held in prestigious public and private collections around the world, this is one of a rare few to return to Wurundjeri ownership.

“Where they go, whether it’s the National Gallery of Victoria or [Melbourne] Museum, that will be worked out. I’m sure the Koorie Heritage Trust will put a bid in for it. There’ll be lots of different groups that want a piece of that, they’re very, very significant and we’re delighted to have been able to secure them for every single Victorian forever.”

Jones said he hoped all Australians would get to see them.

“If people follow our history, it’s a great learning tool to show that we didn’t have a written history so Uncle William’s paintings were depicting our culture and our history, through drawings,” he told the ABC.

“If people know how to read William Barak’s paintings, he’s telling the story of Wurundjeri people, not just Wurundjeri but all the people living on Coranderrk.”