You are here: Home » Articles filed under: 'News' » Article: '1 million visitors for NMA' 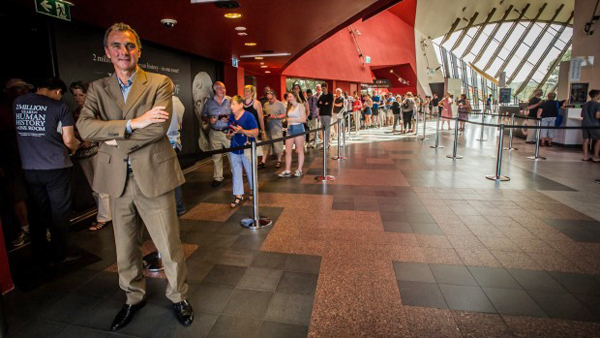 The exhibition which showcases 2 million years of history has just clocked its 1 millionth global visitor here in Canberra.

A History of the World in 100 Objects has proven to be a grand success, opening in Abu Dhabi in April 2014, touring Japan and Taiwan, before hitting Australian shores in Perth in February 2016. It opened in Canberra on September 9.

Before arriving in Australia 845,861 people had visited the exhibition globally.

“This show is a phenomenon, a global phenomenon and I’m so pleased we’ve reached the milestone in Canberra,” Dr Trinca said.

“It makes me incredibly proud to think the NMA has contributed to the exhibition in this way.”

Dr Trinca said more than 128,000 visitors have come from overseas and interstate to see the exhibition at the museum.

This makes it the NMA’s most successful exhibition to date, surpassing 2010’s Yiwarra Kuju: The Canning Stock Route, show which clocked some 122,000 visits.

In the week between Christmas and New Year more than 25,000 people flocked to the exhibition, with wait times of more than an hour on some occasions.

But Dr Trinca said by extending the opening hours he was hopeful more people would have the chance to experience it and wait times would be less.

“One of the features of the show is how long people are spending in it, and that’s a great thing,” he said.

“We’re delighted that people are absorbed in both these very fine objects and the premise, but obviously that poses us a challenge in making sure we are providing adequate opportunities for people experience it properly.

“We’ve been intent on preserving the experience of the show, by making sure people aren’t queuing 10 deep to see an object but allowing them, despite the fact it’s very busy, to have an opportunity to see every one of the things in the exhibition.”

He said the response from visitors had been overwhelming and he was particularly proud of the diverse range of people the exhibit had attracted.

“This has been a show that has captured people’s imaginations, the best shows frequently transcend the idea of what a museum exhibition should be and this one has done that,” he said.

“We’ve been delighted to see a lot of young people, kids with their families, a lot of people between 15 and 35 are visiting the show, just as much as those who are practised museum goers.”

“It’s an extraordinary piece worth seeing just on its own,” he said of the piece which was discovered in 1910 buried under a staircase in the Sudan.

He also singled out the statue of Ramessess II, the clay tablet which tells the epic story of Gilgamesh, the Arabian bronze hand and the Lewis Chessmen.

“The chessman have been a great hit, popularised most recently in the Harry Potter films but with a history that stretches back to the Middle Ages.”

When it leaves Canberra the exhibition heads to China for a run at National Museum of China, Beijing, and then the Shanghai Museum.

A History of the World in 100 Objects is on show at the National Museum of Australia until January 29. From January 7 extended hours are Monday to Saturday: 8am to 6pm. Sundays: 8am to 7pm.