You are here: Home » Articles filed under: 'News' » Article: '1% UK philanthropy going to the arts'

1% UK philanthropy going to the arts 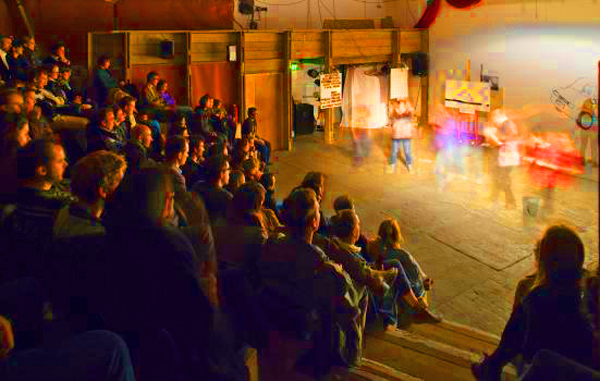 A performance at The Yard Theatre, shortlisted for the Achates Philanthropy Prize in 2016.

With only 1% of philanthropic giving going to the arts, Caroline McCormick shares her thoughts on how the sector can convince more people to give.

In 2016, I launched the Achates Philanthropy Prize to celebrate first-time supporters of the arts. I also wanted to highlight three key points: that arts organisations are mainly charities that need public support; that anyone can be a cultural philanthropist; and that there are many stories to share about the pleasure such support can bring.

The arts sector urgently needs to engage new sources of support as it receives less than 1% of all the philanthropic giving in the UK. And of this, 60% goes to the 50 largest cultural organisations.

I’m often asked about quotas, and it’s not an idea that I generally embrace, as too often it’s a fix to an issue that requires greater scrutiny of the system itself. But there are occasions where that system seems unlikely to change and so quotas can be a necessity.

When it comes to arts philanthropy, the idea of a model that outlines a recommended relationship between wealth and giving holds great appeal, not least at this moment when so many regional organisations are facing standstill funding from Arts Council England (ACE) and major cuts in local authority support. Could such a model provide an answer for arts organisations?

Some cities where cuts to the arts have been particularly high are examining options to replace local authority support. Can models like city endowments for culture take the place that annual grants once held?

For such schemes to be transformational many more people than at present would need to understand that the arts are no longer fully state-funded. The need for the sector and individual organisations to make the case for support effectively is clear. Indeed, it is one of the key findings of the research I carried out for ACE with BOP Consulting on the Catalyst programme over the past three years: that the arts do not make this case well at the present time.

But as responsibility for many services that were previously funded by the state are pushed out into the third sector, can the arts make a compelling case?

For some local authorities the arts can be an easy option to cut, a small proportion of the overall budget, and one that cannot compete for funding against other essential elements such as health and education.

It is this notion of competition that has preoccupied the case for the arts for much of the past ten years, leading to a greater focus on impact and evidence of outcomes than ever before. And while the resulting improvements in measurement and evaluation are in many regards enhancing the offer the sector makes, it is an argument we can never win and which in fact misses the point.

The question the sector must pose cannot be: ‘Do you want a functioning health system or the arts?’ Instead, the question must be: ‘What kind of world do you want to live in?’ Such thinking led to the development of Article 27 in the Universal Declaration of Human Rights, which states the right to access culture.

The arts is an essential part of a society we want to live in, and making its case must be in the context of this wider society and never be special pleading. I believe there are fundamental problems in a society that aspires only to basic human needs and factors that will enhance prosperity, but overlooks the elements that define us as human. The arts must argue its own case – it contributes financial value – but it also offers something that cannot be measured in this way. Art is transformational. It is these transformational experiences that motivate us to support the arts, although the value demonstrated by a well-run organisation, or project demonstrating impact, may bolster such support.

So, is a quota for the arts appropriate in a system in which there are such challenges? I would argue not. To enforce such a position would only further enhance the view that quality of life is defined by survival and economic contribution alone. The danger with quotas is that once you make something a discipline, once it becomes enforced, the joy associated with it is lost, and the pleasure of engaging with the transformational value of the arts is where a greater opportunity for change lies.

Quotas move us away from engaging fully with people. The Achates Philanthropy Prize was founded to celebrate people, and their individual, personal journey towards cultural giving. We wanted to dig deeper than a number – to understand how they feel about their local cultural organisation, how that led them to offer support, how they articulate and share this experience among their family and friends.

Philanthropy today takes on many forms and we look forward to receiving stories of every kind of new support, of giving in meaningful, innovative and interesting ways, which could include the gift of time or resources, as well as unique partnerships and consortia models or community group approaches.

Caroline McCormick is Chair of the Achates Philanthropy Foundation.

The call for entries for the new corporate prize is open until September.