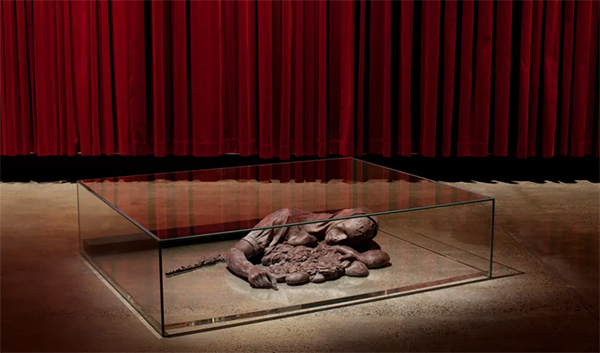 A chocolate sculpture of a suicide bomber: The Road to Heaven The Highway to Hell, by Stephen J Shanabrook. Photograph: Rémi Chauvin/Mona/Rémi Chauvin.

From a hangman’s journal to ‘The Poo Machine’, here are some weird, unnerving and oddly touching objects in museums around the country.

A few months after the pandemic was declared and the cultural life of our cities came to a halt, museum curators around the world started posting their collections on social media in a #curatorbattle started by the Yorkshire Museum. The weekly challenges unearthed #sassiestobject, #fantasticfakes, #mysteryobjects and even the #bestmuseumbum.

But it was really #creepiestobject that got the internet talking and sharing spooky dolls, animal penises and supernatural objects.

I was reminded of this challenge as I set out to find and rank the strangest objects in Australia’s museum collections. A few of these are drawn from Tasmania’s Museum of Old and New Art (Mona), the poster child for the eccentric, but many are hidden gems from universities or smaller institutions. Museums are places of wonder, but these objects range from whimsical to just plain creepy. Sorry for the nightmares. 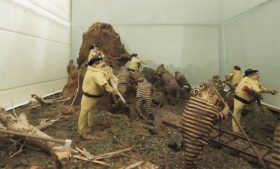 This quirky object was created by Kevin Ladynski, a taxidermist who created multiple dioramas of cane toads in various anthropomorphised settings. In this particular diorama, cane toads are set up like convicts doing manual labour; in others, they’re shown in a boxing match, at nightclub or at the scene of a car crash.

Ladynski appeared in the 2010 documentary Cane Toads: The Conquest, which examines the pest species, one of our greatest environmental blunders, and its resulting impact on northern Australia. A planned travelling show of his toad exhibits didn’t quite get off the ground, but his eclectic exhibits have tickled viewers over the years. 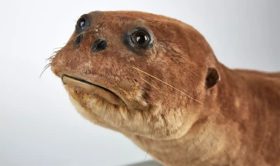 Sad Otter is no longer on display, but he was once part of the Wild installation at Melbourne Museum – a dizzying display of more than 1,000 taxidermied animals that greeted visitors to the museum. The specimen is a giant otter that was bought by the museum in 1884.

His mournful face launched a bunch of memes, tattoos and plush toys when he was featured on the Bad Taxidermy website in 2012. Why is he so sad? According to the experts at Melbourne Museum, the people who stuffed him may have never seen a live otter before. 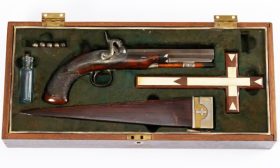 This object came into police possession after a drug raid in 2004. The kit contains a wooden stake, a bottle for holy water, crucifix, pistol, and silver pistol balls with crosses on them. The lettering on the box is the Ephesia Grammata, a mantra that, when pronounced correctly, supposedly offered protection against dark forces.

It supposedly dates to the 19th century, but Dr Patrick Spedding, a scholar of gothic literature at Monash University, is sceptical: “If it’s 19th century, I’ll eat my head” were his approximate words. He believes it is most likely a later novelty item, inspired by films like Bram Stoker’s Dracula (1992) and Sleepy Hollow (1999).

Despite this, kits like these appear to be highly valued. Similar boxes have been found around the world, with Sotheby’s selling one for more than US$25,000. 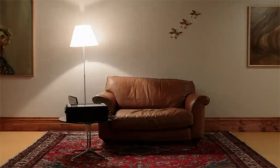 More poignant than strange, this haunting installation simulates the process of euthanasia in a cosy living room setting and is known for bringing viewers to tears.

It was created by sculptor Greg Taylor and Dr Philip Nitschke, a euthanasia advocate and inventor of “the Deliverance Machine”, which was legal in the Northern Territory between 1995 and 1997. Nitschke’s Deliverance Machine was connected to a computer that asked a series of questions to confirm a person’s wish to die before administering a lethal shot.

The art installation is activated when someone sits on the leather chair and it asks participants the exact same questions as the Deliverance Machine. If consent is given, it describes the body’s physiological response until the very end when the screen displays: “You are now dead.”

6. On the Road to Heaven The Highway to Hell, Mona, Tasmania (pictured at top)

This is a lifesize chocolate sculpture, by Stephen J Shanabrook, supposedly based on a photograph of the ruptured body of a teenage suicide bomber. Shanabrook’s preoccupations with death and chocolate might be explained by his biography – he’s the son of a town coroner, and grew up working in a chocolate factory.

Shanabrook himself describes his work as giving “a new and often disturbing meaning to substances and forms otherwise associated with comfort, happiness, and banality …” His collection Morgue Chocolates, of works cast from the moulds of wounds taken in morgues, evokes a dark and perverse Willy Wonka figure. 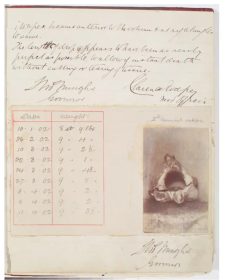 This hangman’s journal contains 100 years’ worth of details on the executions carried out at Old Melbourne Gaol and Pentridge Prison. The detailed examinations observe the “efficiency” of each execution, with chilling lines like: “Death was instantaneous.” It’s significant for including the execution details of Ronald Ryan, the last man to be legally executed in Australia. Reader discretion advised for the weak of stomach.

This an archive record is so unusual that I had to include it. WA’s state archives holds this curious dossier of reported UFO sightings between 1950 and 1970.

Some very spooked members of the public reported strange sightings of noiseless flying objects with bright lights and the ability to change direction very quickly. A few witnesses even mention being followed by silently hovering objects while driving. One rather eerie report includes testimony from a man who was driving when his vehicle suddenly stopped on its own. He then witnessed a bright light outside the windscreen for about five minutes and experienced a sensation of being “observed”.

In an interview with ABC Radio Perth, Damien Hassan, a senior archivist, notes that the police appeared to take these reports “very seriously” and that there was also considerable interest in these sightings from the air force and the US government. You can read the entire digitised file on the archive’s website. 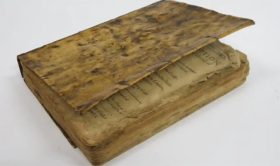 A book bound with human skin (and a bit of rat skin as well). Photograph: Federation University

This skin-crawling item is a religious book written in Old English and Latin and dates to 1599. The practice of binding books with human skin, or anthropodermic bibliopegy, was quite a common one in the early modern era and made use of the skins of criminals, medical cadavers or the destitute.

What does it feel like, you might be wondering? Just like leather, says curator Clare Gervasoni. There was some doubt as to the material of the binding until a biomedical honours student at Federation University confirmed that most of the book’s covering was largely made out of human skin, with some portions made from a rat.

The binding is rather unassuming and it’s only when you spot some very visible (and recognisably human) hair follicles that you start feeling a little queasy. 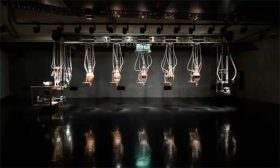 There’s something otherworldly about Mona, the eclectic private gallery in Hobart founded by David Walsh. Entering this windowless, subterranean gallery by spiral staircase feels like going deep into the subconscious to be confronted by sex, death and disgust. The last of these is best exemplified by the Cloaca Professional, a display created by the Belgian artist Wim Delvoye as an expression of the meaninglessness of life.

Otherwise known as the “poo machine”, this installation mimics the digestive system and turns food into faeces. Food is fed into the machine daily and visitors can watch it being processed before it’s excreted at the other end – complete with stench. 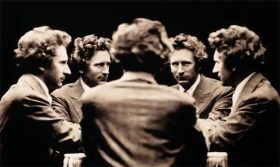 Artist unknown, Percy Grainger ‘In the Round’ 1933. Photograph: Supplied.

Percy Grainger is one of Australia’s most famous and colourful musicians, best known as the composer of Country Gardens and for his deep obsession with the folk music of the British Isles. If you grew up playing the piano, you may have learned some of his bucolic pieces, like “Will ye gang tae the Hielands, Lizzie Lindsay?”

But Grainger’s personal life was far less serene than his music. Before his death in 1961, he deposited a box into his bank account marked “Private Matters”, with instructions not to open it until 10 years after his death. When the box was finally opened, they found 80 whips, an erotica collection, photographs explicitly documenting his sado-masochistic practices, and even a blood-stained shirt. He left further instructions for these items to be exhibited in the “Lust Branch” of the Grainger Museum that he had founded at Melbourne University.

What was once an autobiographical museum has now been reimagined as an experimental space dedicated to music, art, multimedia and architecture. The collection, which will be made available online, includes about 100,000 items from Grainger’s life, although his generous offer to exhibit his skeleton in the museum didn’t ever eventuate.