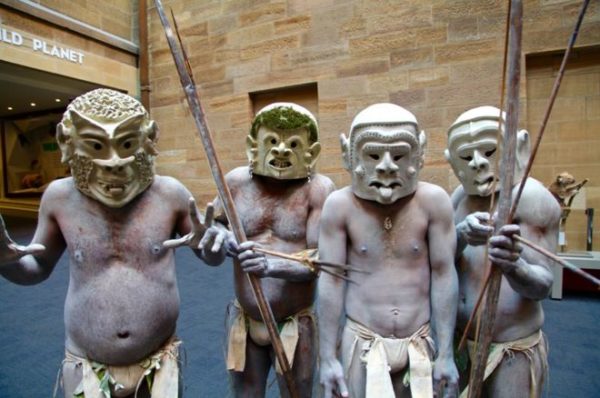 The Asaro “mud men” from Papua New Guinea’s eastern highlands are known for their ghoulish clay masks adorned with pigs’ teeth and shells. Four of them have travelled to Sydney’s Australian Museum for a new exibition, where Ian Lloyd Neubauer found out more about the masks and the men behind them.

With their skin painted white, elongated bamboo fingers, and of course the eerie masks, the four mud men – who have never left Papua New Guinea’s highlands before – are at the Australian Museum for a week as “artists in residence” as it opens a new permanent mud men exhibit.

The museum commissioned Klinit Berry, a former administrator at the University of Goroka in Papua New Guinea (PNG), to travel to the eastern highlands to find Asaro mask artists who might be interested in taking part.

How the mud men began

With no written history, there is no way of pinpointing when the Asaro began making masks, though it is believed the practice has existed for four generations. Ms Berry has one story of the origin of the mask.

“One of the Asaro got married and everyone wore their traditional costumes,” she says.

“But one man had no costume, so he took an old bilum (a string bag), cut two holes for his eyes, dipped it mud and also covered his skin with mud, and that was his costume. But when he arrived at the wedding, all the others thought he was a ghost and so instead of celebrating, they fled.”

The wedding guests’ reaction, Ms Berry continues, gave the man an idea on how to score a decisive victory in a protracted tribal war with a neighbouring tribe.

He convinced his brother and his friends to disguise themselves with masks and mud. “So they covered themselves in mud and attacked the tribe, and that is how they won. The enemy thought ghosts were coming and they ran away without firing a single arrow.”