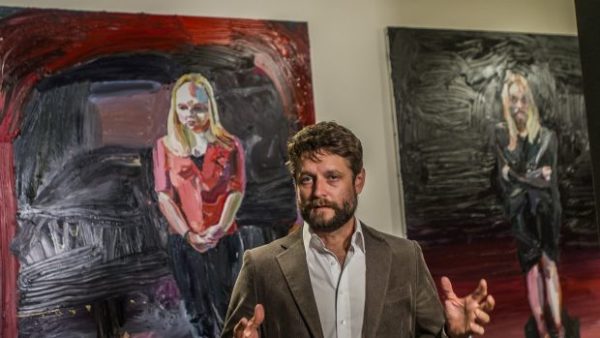 Renowned war artist Ben Quilty at the War Memorial with his series of portraits depicting the impact of war on the family members of Australian servicemen and servicewomen.  Photo: Karleen Minney. Source: Canberra Times.

A series of portraits depicting the impact of war on the family members of Australian servicemen and servicewomen was launched today at the Australian War Memorial.

Painted by Australian official war artist Ben Quilty, these portraits focus on the partners, children, and parents of Australian soldiers who served in Afghanistan. While family members have always played a vital role in Australian military history, their stories are often little known.

The Memorial commissioned Quilty to create portraits of people whose loved ones were either killed or suffered the effects of post-traumatic stress disorder (PTSD) as a result of their service in Afghanistan. The aim of the paintings is to raise awareness of the experiences of families in the aftermath of war, while acknowledging the unique and inspirational role they play.

Subjects Leesa Kwok, Elvi Wood, and Elle-Lou Diddams each had enormous pain and sorrow thrust upon them through their loved ones’ service in the Australian Defence Force. Quilty says he wanted to emphasise the ongoing battles that these women, and many others like them, continue to experience in what he calls Australia’s “longest war”.

Director of the Memorial Dr Brendan Nelson was inspired to commission this series after listening to Leesa Kwok speak about her family’s journey.

“I commissioned Ben Quilty, who did that remarkable work in After Afghanistan of the men and women who served our nation in our longest war, to paint the effect that service has had on the families. Leesa’s is one of three subjects, along with Elvi Wood, who lost a husband, and Elle Lou Diddams, who lost her father, and the Memorial is proud to have these works hang within our walls,” said Dr Nelson.

“This is a very important part of the therapeutic journey for young veterans and the families who love them. My admiration for the courage of these three women is immense.”

Leesa Kwok’s husband, James Tanner, served in East Timor in 2004, Iraq in 2006, and Afghanistan in 2007 and 2010. He now suffers from post-traumatic stress disorder. Kwok has been open about the struggle her family and others face when dealing with PTSD as part of life.

Quilty wanted the portrait to express how Leesa and her family continue to live with the consequences of her husband’s service. PTSD and its effects are an intense, constant presence in her life that does not subside.

On 23 May 2011 Sergeant Brett Wood, 2nd Commando Regiment, was killed by an improvised explosive device in Helmand province while on his third tour of Afghanistan. His wife, Elvi Wood, has become a voice for war widows and other family members. She works closely with serving members and ex-service organisations in the interests of veterans’ welfare.

“I painted Elvi as if she were on a stage performing,” Quilty said. “This idea developed out of conversations during sittings in the studio; Elvi said that she felt thrust into the public eye the moment her husband was killed. She went from being a private wife to a public widow, a role with which she has never been completely comfortable.”

Elle-Lou Diddams was just 15 years old when she lost her father. Sergeant Blaine Diddams of the Special Air Service Regiment was killed in Afghanistan during a small-arms engagement with Taliban insurgents on 2 July 2012, three days before he was due to return home.

“Losing her dad when she was a teenager has had a profound effect on Elle-Lou. The portrait emphasises the feeling of isolation that came with losing her father at such a vulnerable age,” Quilty said.

The longest war will be on display at the Memorial until May 2017.