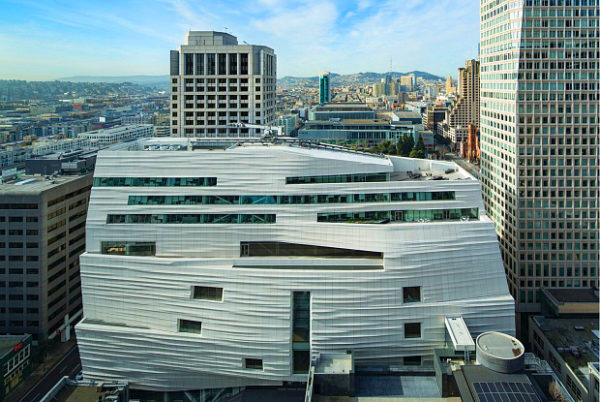 Ben Luke, The year in museums: the building boom and the expanding canon, The Art Newspaper, 5 December 2016

In an exclusive report in the April issue, The Art Newspaper reported that in the US alone close to $5bn had been spent on museum expansions between 2007 and 2014. Worldwide, we calculated an $8.9bn outlay by 75 museums in that period, which coincided with a devastating and prolonged global recession.

That boom goes on: 2016 saw numerous landmark buildings open or re-open their doors. In the US, the San Francisco Museum of Modern Art (SFMoMA) opened its rippling, gleaming white $305m extension, designed by the Norwegian firm Snøhetta, after a three-year closure. It is now the largest museum of Modern art in the US, with 170,000 square feet of exhibition space.

Meanwhile, the David Adjaye-designed National Museum of African American History and Culture, part of the Smithsonian Institution, opened next door to the Washington Monument, in September, at a cost of $540m. Arguably one of the best loved museums of the year, architecturally at least, was Marcel Breuer’s 1966 Whitney Museum building, now lovingly restored and occupied by the Metropolitan Museum of Art as the Met Breuer. As many observers noted, Breuer’s inverted ziggurat in concrete and granite was being cared for by its new tenants as if it were itself a work of art.

While some commentators have wondered whether “donor fatigue” might halt the museum building boom, major expansions under way at the Museum of Modern Art (MoMA) in New York and the Los Angeles County Museum of Art suggest that the major museums at least seem likely to propel it into the 2020s.

In Europe, the key building opening was undoubtedly London’s Tate Modern Switch House, an 11-storey extension clad outside in brick and dominated by raw concrete within. Critics were universal in their praise for Herzog & de Meuron’s £260m creation. But they were more equivocal over the displays within, reflecting the expansion of the Tate’s collection into geographical areas such as Latin America and Africa, which were until recently largely neglected by museums of Modern art.

The Tate is the global standard bearer for a process of rewriting the canon of art history that in 2016 feels more palpable than ever. In appointing Frances Morris, who was previously director of its collection of international art, as the director of Tate Modern, the museum is indicating that buying and showing art, not constructing buildings, will be its focus from now on.