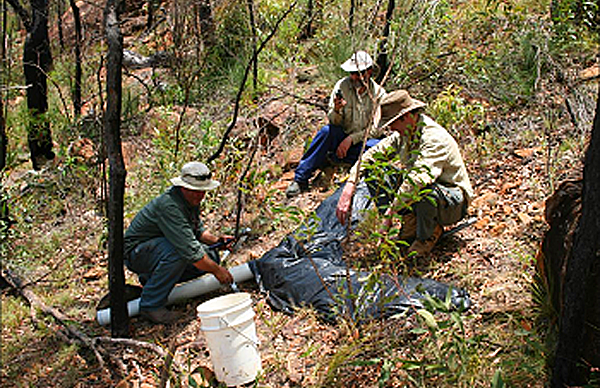 2017 NSW Office of Environment and Heritage Eureka Prize for Environmental Research
WINNER: Catchment Sediment Budget Research Team, Griffith University.
Along with climate change, poor water quality from catchment runoff is a major threat to the Great Barrier Reef. The Catchment Sediment Budget Research Team has transformed how sediment sources are identified and targeted, resulting in a significant shift in government policy and practice.

2017 UNSW Eureka Prize for Excellence in Interdisciplinary Scientific Research
WINNER: Aboriginal Heritage Project, The University of Adelaide and South Australian Museum
Working in partnership with Aboriginal families and communities, this project uses historical hair samples to reconstruct the map of Indigenous Australia prior to European arrival. The Aboriginal Heritage Project is reconstructing the vast history of people in Australia, and making a valuable contribution to the Reconciliation process.

2017 Johnson & Johnson Eureka Prize for Innovation in Medical Research
WINNER: The Colvera Team, CSIRO; Clinical Genomics Pty Ltd; and Flinders University
The Colvera Team has developed a clinically validated blood test that sensitively and accurately detects cancer DNA in the blood plasma of colorectal cancer patients. This presents a new opportunity for oncologists to improve treatment regimens through earlier disease detection that may in turn lead to increased patient survival.

2017 Defence Science and Technology Eureka Prize for Outstanding Science in Safeguarding Australia
WINNER: Associate Professor Richard Mildren, Macquarie University
The diamond-based technology invented by Associate Professor Richard Mildren is capable of radically increasing the power and spectral range of lasers. Australian and United States defence agencies are investing in this technology to increase their power capability, and a UK company has licensed commercial applications in quantum science and biomedicine.

2017 UNSW Eureka Prize for Scientific Research
WINNER: Bacteria Busters, Swinburne University of Technology
The original work of Professor Elena Ivanova and Professor Saulius Juodkazis shows that mimicking the nanomorphology of insect wings is an effective method of preventing bacterial colonisation. Their unique approach of providing a physical, rather than chemical means of killing bacteria, could have a huge impact on public health worldwide.

2017 3M Eureka Prize for Emerging Leader in Science
WINNER: Professor Andrew Whitehouse, Telethon Kids Institute
Professor Andrew Whitehouse is passionate about helping children with autism reach their full potential. Through a combination of scientific research, policy development, science communication, and service delivery, he has established himself as a national and international leader on autism.

2017 University of Technology Sydney Eureka Prize for Outstanding Mentor of Young Researchers
WINNER: Professor Justin Gooding, UNSW
Through a program of individualised mentorship, Professor Justin Gooding has trained and developed an all-new breed of research leader in bionanotechnology and nanomedicine. He has focused on developing innovative, entrepreneurial and passionate researchers who become talented mentors in their own right.

2017 Department of Industry, Innovation and Science Eureka Prize for Science Journalism
WINNER: Julia Peters, Wain Fimeri, Dr Jordan Nguyen, Riley Saban, Ili Baré and Lizzy Nash
A compelling two-part documentary series, Becoming Superhuman follows the story of a biomedical engineer and a teenage boy with cerebral palsy, who reveal what’s possible when cutting edge-technology is fused with biology. Together, they present a future where we all might have a chance at developing superpowers. Produced by The Feds. Broadcast on ABC TV’s Catalyst, 24 and 31 May 2016.

2017 University of Sydney Sleek Geeks Science Eureka Prize – Secondary
WINNER: Eliza Dalziel, Claire Galvin, Georgia Hannah and Anna Hardy, St Monica’s College, QLD
In their film Manure You Know, Eliza, Claire, Georgia and Anna explain the importance of dung beetles in our ecosystem. They investigate why the introduction of dung beetles has positively influenced farms on the Atherton Tablelands in Far North Queensland, and demonstrate how the belt transect method can be used to monitor dung beetle populations.