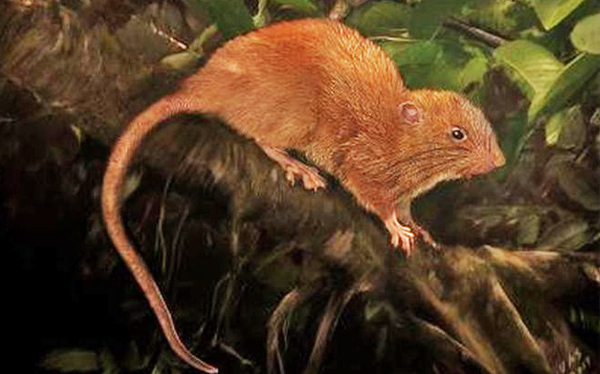 An illustration of the new species found on the Solomon Islands. Image: Velizar Simeonovski.

A new species of rat, four times larger than regular rodents, has been discovered on the Solomon Islands in the Pacific Ocean.

The creature, stretching almost half a metre (19in) in length, lives among the trees and survives on nuts that it cracks open with its teeth.

The Solomons are already home to eight other species of rat, but this is the first new discovery in 80 years.

The new variety, named Uromys vika, has long been spoken of in island folklore.

Located about 1,800km (1,100 miles) off the coast of Australia, the chain of islands that make up the Solomons is biologically isolated.

Most of the mammals that live there are found nowhere else on Earth.

“When I first met with the people from Vangunu Island in the Solomons, they told me about a rat native to the island that they called vika, which lived in the trees,” said Tyrone Lavery, a researcher at the Field Museum, in Chicago, who made the discovery.

Despite searching for the creature since 2010, Dr Lavery failed to turn up any evidence of the big rat, apart from large droppings.

“I started to question if it really was a separate species, or if people were just calling regular black rats ‘vika’.” he said.

In November 2015 though, a sharp-eyed conservation ranger saw a large rat tumbling from a 10m tree felled by loggers.

The fall killed the rat – but the ranger shipped it to the Queensland Museum, in Australia, where Dr Lavery was a fellow.

“As soon as I examined the specimen, I knew it was something different,” he said.

“There are only eight known species of native rat from the Solomon Islands, and looking at the features on its skull, I could rule out a bunch of species right away.”

After DNA testing, Dr Lavery confirmed it was a new species, which he named Uromys vika.

The newly discovered rat has a long, scaly tail that researchers believe helps it grip while travelling through the trees. The animals’ ancestors probably travelled to the islands on vegetation.

Once on the island, they evolved the large, sharp teeth which they use, according to the locals, to nibble into nuts and coconuts.

These giant-sized but long-hidden creatures are likely to be immediately classified as critically endangered, due to threat that they face from logging. About 90% of the island’s trees have already been cut down.

“The area where it was found is one of the only places left with forest that hasn’t been logged,” said Dr Lavery.

“It’s really urgent for us to be able to document this rat and find additional support for the Zaira Conservation Area, on Vangunu, where the rat lives.”

The study has been published in the Journal of Mammalogy.