The ICOM Australia Award recognises and celebrates the outstanding work undertaken by ICOM Australia member institutions and individuals that has strengthened international relations and contributed to the cultural richness of our region. 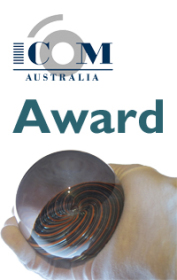 Australian museums enrich the cultural, social and intellectual lives of all Australians and in so doing contribute to the development of well-informed, tolerant and cohesive communities. The exchange of ideas and expertise between our near neighbours is an important part of expanding these opportunities.

Australian museums have both the opportunity and the responsibility to share their expertise, information and resources, especially with our near neighbours in the Asia-Pacific Region.

Award winners are presented with a glass globe sculpture and certificate. The sculptures were commissioned by ICOM Australia from Sydney based master glassmaker Benjamin Edols, and were created at the Canberra Glassworks.

The award prior to 2015 was known as the ICOM Australia Award for International Relations.

Two categories of award are offered for:

To become a member of ICOM Australia please see: Join us