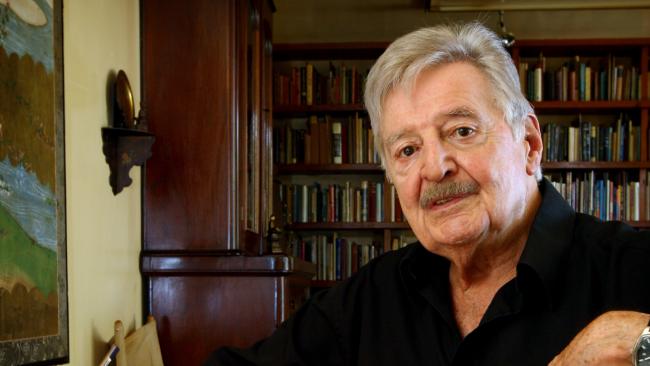 Peter Sculthorpe, Australia’s greatest composer, was not given an official state memorial service.

The opportunity to give the 2017 Peggy Glanville-Hicks Address fills me with trepidation because I knew Peggy. In 1970 the composer had returned to Australia for the performance of her opera The Transposed Heads, at the then University of NSW Opera under music direction of Roger Covell, a remarkable scholar and critic on Australian music. I met Peggy in Peter Sculthorpe’s humble little office at the University of Sydney.

Peter and Peggy clearly hit it off. They had much in common, including having studied with Egon Wellesz, the Schoenberg pupil and Viennese contemporary of Berg and Webern. Peggy was that rare thing: a woman composer. Shamefully, music all too often remains as a last bastion of misogyny. Needless to say to this then hapless 18-year-old, Peggy was a formidable person.

I want to propose a view as to the status of the artist, creativity and intellectual endeavour in our society. There is a story that may help explain my perspective. When Sculthorpe died on Aug­ust 8, 2014, I rang the then arts minister, George Brandis, and advised him that an official state memorial service was not only appropriate but also obligatory.

I reminded him of Sculthorpe’s status. He thanked me for the call and for the advice, then said it was not his gift but rather one in the sole domain of the prime minister. I said I knew that but was hoping, in the PM’s absence, he would ensure it was dealt with expeditiously and positively.

When Brandis later phoned me, it was to advise that Tony Abbott had declined my request as Sculthorpe was not a person of sufficient high standing, “like Dame Joan Sutherland”. The call ended somewhat abruptly.

The decision to deny that nation­al acknowledgment was wrong on many counts. At the time I did not want to taint the memory of Sculthorpe with that brutish shadow. Now, having regard to the legacy of Peter, and Peggy, I feel compelled to raise it and reflect on what matters in our nation and its creative direction.

I think the status of artists in our society has made much pro­gress since the Commonwealth Literary Fund was founded in 1908, initially to care for destitute writers, but in recent years that progress has been retrograde. Support for creative artists has diminished.

Clearly if the most famous composer in the country’s history can die with no sense of responsible obligation to honour him and what he had done for our country and its international creative standing, then something is seriously wrong.

Music is as core to my being as breathing. It worries me that art music is becoming irrelevant to far too many. So I wonder: how can we give effect to a healthy life for contemporary art music? While I accept that art music’s support base has always fluctuated, the audience sizes we see increasingly make pain in many a creative heart. We must think about renewal of purpose, in the service of music sensibility, creativity and connection. That means more time and effort need to be invested in renewing audience relationships.

In an era of sensory enhancement and expansive notions of theatrical presentation, we need to reinvent the plain, old-fashioned concert in a variety of ways if it is to have a meaningful future. We need audiences that are engaged and comprehending. We need to be responsible for our future, and be counted as constructive advocates to ensure oppor­tunities for artists and cre­ativ­ity, in a landscape where work, community and communication are in a period of unparalleled change.

I want to be a part of a nation that is passionately committed to talent; a society with an expansive energetic cultural promise governed by a devotion to curiosity, generosity in knowledge, judgment and perspective — one that has grace, standards, courage and fairness in its underpinnings; where excellence in intellectual, scientific and creative life is celebrated as absolutely core to the national future.

But when I reflect on the why and how of the Australia I fervently believe we all deserve, I have this developing pit in my stomach. After 45 active years of working around the cultural fabric in universities, performing arts companies, government, media, major commercial and public enterprises, I am quite certain artists in Australia, let alone composers and musicians, still have no real position of substance where creativity is seen as being central to a good society: a position valued by those in power, devoted to caring and promoting intellectual and imaginative life.

We have reached a new nadir in domestic public policy and program delivery. I would observe, from my experience, that Australians — artists or not — have unusual difficulty in receiving criticism. It is a national weakness that is matched with a flawed ability to provide critical feedback in a caring, nourishing and constructive way. As a nation it is a problem we must all confront if real dialogue about our future is to be possible.

The evident current failure of cultural policy is, I suggest, our collective failure. The absence of fresh, compelling approaches reflects a failure to renovate thinking over the past two decades. It is a disturbing example of a vacuum in effective action; Australian complacency writ large. We in the creative community must not descend into that vortex of despair all too often evident in dispersed communities.

Many of our policy settings are in a time capsule: frozen from long ago in terms of regulatory, financial and industrial frameworks. They do not even consider letting audiences and their changed behaviours into the policy room as an important governing objective. We have to rebuild hope and purpose to make art music matter afresh.

Policies that favour process over outcomes, or that produce an “emperor’s pleasure” model as with Brandis a few years ago, serve no purpose and offer no hope.

We need policies that inspire and facilitate creative innovation, which lies at the core of any successful national future.

For music we must build a promise for a resilient, dynamic creative future.

We cannot afford to be bland: it has been too prominent in our past and should have no place in our future. Banish the bland. We need to back the bold!

It is fashionable today to defend music by saying that it assists students in other skills such as language, mathematics and the other sciences. And that is all undoubtedly true. After all it activates more neural pathways than any other human activity as demonstrated in various studies, making the brain come alive as nothing else.

But it saddens me that in the 21st century we are increasingly compelled to defend music — old and new — by reference to impacts other than to music itself.

The feelings released by music and the devotion to beauty and pure creativity it represents are among the most positive, noble, life-affirming outcomes in the diversity of all human activity.

We must all defend and promote substantial creative policy renewal for new music afresh, with conviction and all our collective being, because music really matters!

We need to strive for a refreshed view of our nation where Peggy Glanville-Hicks and Peter Sculthorpe are valued artistic elders, central to a sense of Australian self, and where the critical place of artists in our life is properly celebrated.

Kim Williams is chairman of the Copyright Agency. This is an edited version of his Peggy Glanville-Hicks Address, delivered in Perth on Monday. It will be repeated in Melbourne and in Sydney.