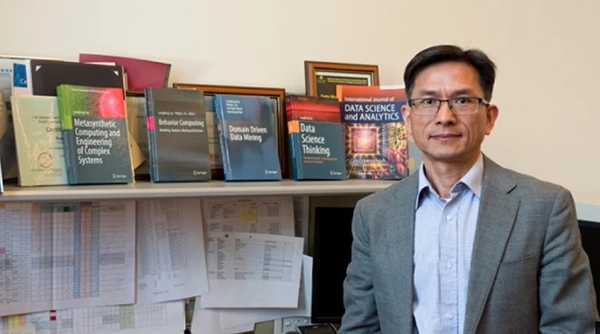 Liam Mannix, Scientist wins top award for using your data to make you pay your tax, The Age, 28 August 2019

A data expert who won one of Australia’s top scientific honours – for finding ways to get us to do our taxes on time – has defended Australian researchers who work with Chinese institutions.

Professor Longbing Cao took out the Eureka Award for Excellence in Data Science at Sydney’s Town Hall on Wednesday night.

He was among 17 winners, with gongs also going to a public health scientist who runs yoga programs for her colleagues and a team that invented a home-made-bomb detector.

Links between Australian tertiary institutes and China are under the microscope after federal Education Minister Dan Tehan met vice-chancellors this week over concerns about national security vulnerabilities in research collaborations.

Professor Cao studied in China before moving to the University of Technology Sydney. He said he did not do any work with Chinese institutions, but there was nothing wrong with Australian researchers collaborating with China – as long as they were transparent about it.

“Researchers in China and Australia, if we work on the collaboration in a professional way and make everything transparent, there shouldn’t be anything different from other countries,” he said.

“If a client from China, they want to pay us, pay the university, for me and my team to work for them, and everything has been documented, I don’t think there would be anything different for another company from the US or India.”

Professor Cao has worked with the Australian Tax Office to find ways to encourage people to pay their tax debts.

While reluctant to discuss his exact techniques, Professor Cao said he used the personal data of taxpayers including “circumstance, demographic, and interactions with the government” to develop a model to test various strategies to make people pay up.

That work prompted the tax office to launch a targeted SMS program reminding debtors to pay. Each SMS was tailored to each individual depending on what Professor Cao’s model said was most likely to work.

“For example, if a client is working in a very noisy situation – if I’m a truck driver, for example – if you call me at the wrong time, it’s not possible for me to answer my phone. So we can predict when the best time, and what the best way to communicate with some of those taxpayers is,” said Professor Cao.

The SMS campaign was a hit. The ATO sent about 600,000 text messages in 2015, securing $1.4 billion in on-time payments from people who usually paid up late. 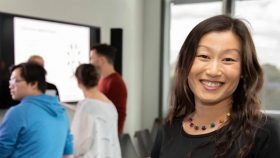 Associate Professor Melody Ding from the University of Sydney picked up the Eureka for Emerging Leader in Science for her work in public health.

Dr Ding studies risk factors for chronic disease, and for prevention. In one study,  she found women who eat more fruit and vegetables reduce their risk of developing psychological stress.

She also practises what she preaches, leading workplace yoga classes.

Pioneering work developing a “bionic spinal cord” that could help paraplegics walk again has won the Eureka for Excellence in Interdisciplinary Scientific Research. 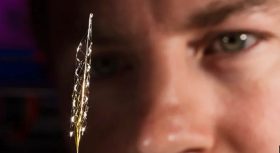 Biomedical engineer Dr Nick Opie from the University of Melbourne, part of the team who won a Eureka Prize for its work on spinal cords. Credit: Jason South.

The team, a collaboration between Endovascular Bionics Laboratory, University of Melbourne and Synchron in Melbourne, have developed a tiny stent wired with electrodes that can interpret brain signals and convert them to commands.

Also on the winners list was GreyScan, developed by a team from the University of Tasmania.

Greyscan’s scanners can detect homemade bombs, which are typically made using fertiliser or gunpowder and used in car bombs, pressure-cooker bombs and suicide vests.

The Australian Museum Eureka Prizes are the country’s top science awards, with $170,000 in prize money handed out on the night.

The full list of winners can be found on the Eureka Prizes site.