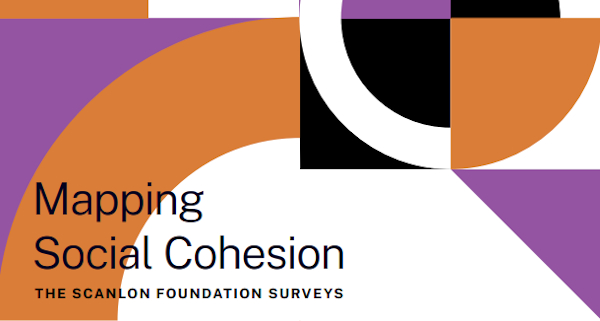 Not one, but two surveys, in a year like no other

The thirteenth edition of the Mapping Social Cohesion research came in a year like no other.

In 2020, in the context of the dislocation of Australian society by the COVID-19 pandemic, the Scanlon Foundation Research Institute conducted not one, but two national surveys – in July and November – using the Social Research Centre’s probability-based Life in Australia panel (LinA).

Societies faced with crisis may for a time experience increased cohesion, as people respond to a common threat through mutual support. On the other hand, societies under pressure may fracture, as its members turn inward, focusing on people to blame, and searching for scapegoats.

Which way has Australia gone? Have we come together, or have we fractured? What do the 2020 survey findings reveal about the character of Australian society during an unprecedented global pandemic?

Drawing on more than a decade of benchmarking data collected in previous Scanlon surveys, the 2020 Mapping Social Cohesion Report provides insight into the resilience of Australian society when faced with a major crisis.

The Scanlon Foundation national social cohesion survey was first conducted in 2007 and has been conducted annually since 2009. In addition to the national surveys, local area and minority group surveys have been conducted on nine occasions, in total twenty-four surveys with more than 55,000 respondents. For the first time in Australian social research, these surveys enable annual tracking of public opinion on social cohesion, immigration and population issues.

From 2007 to 2019 the surveys were administered by telephone to randomly generated samples of landline telephone numbers, also mobile numbers from 2013, abbreviated in the following discussion as RDD (Random Digital Dialling). Beginning in 2018, the survey was transitioned to the Social Research Centre’s probability-based Life in Australia TM (LinA) panel on which close to 90% of participants self-complete the survey online. In 2018 and 2019 the survey was administered in parallel in two modes, RDD and LinA, to provide understanding of the impact of mode of administration on patterns of response.

The Scanlon Foundation surveys are distinctive, first in terms of their comprehensive coverage. The July survey employed a questionnaire comprising 127 substantive and 21 demographic questions in nine modules. In November, key issues were re examined in a shorter version of the survey, 62 substantive questions and the full demographic.

Second, the sample is sufficiently large (3,090 respondents in July, 2,793 in November) to provide insight into segments of the population, for example, groups differentiated by age, education attainment, financial status and political alignment.

Third, the long record of surveying enables tracking of the constant and changing elements of Australian opinion over time: in a broad perspective, from 2007 to 2020, over a three-year period, from 2018 to 2020, and during the current year, from July to November.

Societies faced with crisis may for a time experience increased cohesion, as people respond to a common threat through mutual support. A current British survey has found that during the pandemic some local government areas which had invested in programs that promoted employability, social mixing and building trust between communities experienced positive social cohesion outcomes: an improvement in relationships with family and neighbours, increased rates of volunteerism, more positive attitudes towards people from immigrant backgrounds, and optimism about the future.1

On the other hand, societies under pressure may fracture, as its members turn inward, focusing on people to blame, searching for scapegoats. Such societies may experience heightened pessimism, lower sense of wellbeing and life satisfaction, fostering of anti-immigrant sentiment, and opposition to cultural diversity and multiculturalism. A discussion focused on Australia hosted by the Network Ten commentator Waleed Aly was promoted in this negative perspective: The Covid-19 pandemic has strained the cohesiveness of our society. People are becoming more and more divergent in their views, and more and more distrusting of opposing views. A lot of people feel more marginalised and categorised while some seek strongly to find someone to blame for this crisis.2

What does the Scanlon Foundation survey reveal about the character of the Australian society in the time of crisis? In the first part of this Executive Summary the findings of the July 2020 survey are considered, followed by discussion of the November survey.