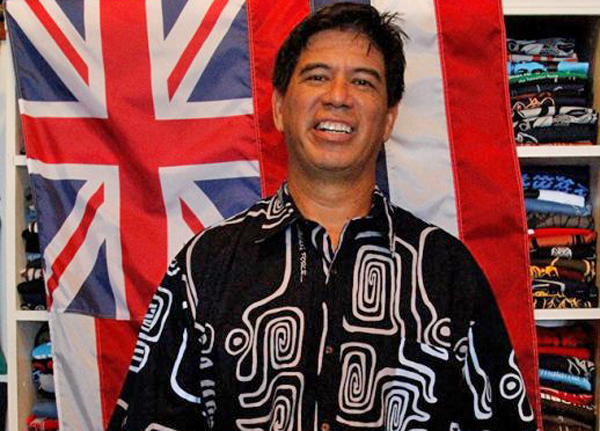 The Aloha shirt is an iconic Hawaiian taonga (treasure) with a rich history and layers of meaning. Assistant Pacific Cultures curator Sonya Withers explores the stories in their designs.

If there is any culture across the Pacific rim that can naturally produce clever combinations of colours and the romantic scenery of their islands through the wardrobe of fashion it would have to be the Hawaiians. We have seen this through the intricate feather work and colouring of the famous ‘ahu‘ula (1) that was draped over Captain Cook’s shoulders by prominent ali‘i (chief) Kalani‘ōpu‘u. We were reminded of this generosity and sense of intentionality during numerous ‘talk stories’ with Aloha shirt makers, educators, collectors, and wearers we encountered across Hawai‘i during our recent co-collecting project.

Before heading to Hawai‘i I had accustomed my eyes to classic Aloha shirt makers of the late 1950s: Reyn Spooner, Kahala Sportswear, Alfred Shaheen, and so on, along with recent campaigns from Dior and Chanel who were glitzing the Aloha shirt upon airbrushed models. I had saturated my vision with hash prints that emphasised the curves of palm trees to the movement of women in hula and idyllic flora of the Pacific. But I was curious (possibly hungry) to see what indigenous Hawaiians were doing with the Aloha shirt today – especially in a world where we are increasingly seeing the appropriation and misuse of indigenous cultural imagery on the catwalk by non-indigenous designers. My initial response, like many of my creative peers in the Pacific, was to ‘reclaim’.

However, after being transported back nearly every working day since leaving Hawai‘i, I am consistently ‘embraced’ by the aloha (love) and mana‘o (ideas, knowledge) shared with every single maker, educator, collector, and wearer of the Aloha shirt we engaged with. I am reminded of our Hawaiian co-curator, scholar, and cultural specialist Noelle Kahanu’s account of Kalani‘ōpu‘u’s approach to Captain Cook and what might have been his intentions behind gifting Cook the ‘ahu‘ula and mahiole:

“Can we imagine for a moment Kalani‘ōpu‘u’s own sense of agency and urgency? Might he have envisioned how his chiefly treasures would travel across oceans, binding people – even countries – and creating relationships that would span generations?” (2)

The vast collection of shirts, coupled dresses, and keiki (child) Aloha shirts have provided Te Papa’s Pacific Cultures collection with more than just ‘shirts’ from Hawai‘i, but the mana of generosity from everyone we met, their mana‘o behind the prints on the shirts and, more importantly, the knowledge of their kūpuna (ancestors) and aloha āina (love for the land).

In Hilo, native Hawaiian Luana Neff together with her husband Craig from The Hawaiian Force shared the mana behind the designs on one of the Aloha shirts we brought back:

Craig wears a shirt that features he‘e (octopus). Luana described the he‘e as the kino lau of Kanaloa (an embodiment of the God of the Ocean) and how Hawaiians are Kanaloa people through their honour and concern for the ocean. It’s affinity to their identity as Kanaloa people, their love for the ocean, and respect to a Hawaiian god resonates their philosophy on ‘how to wear your culture’. (3)

On Moloka‘i island, we acquired a shirt that features the ‘opihi shell. ‘Opihi is a type of shell fish, considered a rare and expensive delicacy. They can be found suctioned to rocks and if not detached entirely the first time they can prove harder and harder to remove after each attempt.