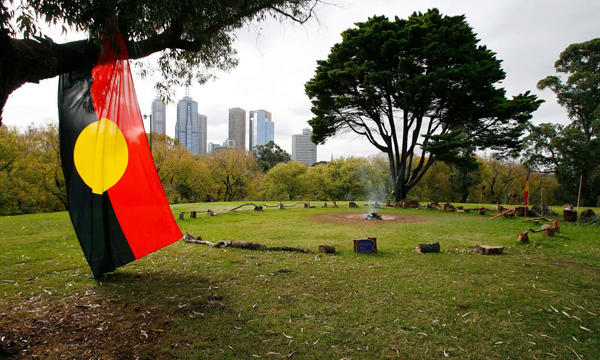 Recognition of a Melbourne site where Indigenous elders are buried is a moment of profound symbolic note.

The commonwealth’s National Heritage List has finally recognised a symbolic part of central Melbourne where the bones of many Indigenous elders lay buried.

For Aboriginal and Torres Strait Islander Australians the incorporation into the list of the Melbourne Domain Parkland and Memorial Precinct (including the Kings Domain Resting Place where the elders are buried) represents long overdue official acknowledgment of the injustice and disrespect shown to Indigenous dead.

It is a moment of profound symbolic note, and perhaps a spark of hope emerging from a dark past, that Australia’s appalling historic and extant treatment of the Indigenous dead may finally be addressed.

It is a move that should, ideally, be harnessed as the impetus for a long overdue national “keeping place” for displaced Aboriginal and Torres Strait islander ancestral remains. We should, perhaps, keep a lid on the optimism in this space where progress has been pitifully slow.

The 109-hectare parkland and memorial precinct, south of the central business district between St Kilda Road and the Yarra River, is a peaceful parklands area of trees and water, and monumental structures including the Shrine of Remembrance, the observatory and Government House.

Modern urban landscapes, not least in former or current capitals in outreaches of the old British empire, will often reflect and implicitly acknowledge the tensions of colonial history. The landscape of the Melbourne Domain Parkland and Memorial Precinct is an exemplar of this.

For tens of thousands of years Aboriginal people camped and gathered in what is now the Royal Botanic Gardens on the Yarra banks, and around the lagoons and wetlands of the greater current city.

As Melbourne City Council points out:

“The lakes of the Royal Botanic Gardens, while modified, are noted as some of the last surviving remnant wetlands within the Melbourne district which were present prior to European settlement … they remain (with the Yarra River) as significant landscape markers of a pre-European landscape.
A Victorian landscape has been imposed on the original Kulin Nation country of rich, almost perfect hunting grounds, with the river, lakes and lagoons. Government House with its totemic belvedere tower stands as a monument to colonial imposition and dispossession.”

The shrine opened in 1934 in response to Australia’s participation in the first world war, the conflict that so defined postcolonial non-Indigenous Australian identity. From a population of five million some 416,000 Australian men enlisted. About 60,000 died and more than 155,000 were physically wounded. The losses of the first world war and the narrative around national “sacrifice” and Anzac “spirit”, has always eclipsed in national consciousness and narrative the devastation of those other wars on the colonial frontier which also resulted, according to some estimates, in the deaths of at least 60,000 Indigenous people.

The federal government has long been shamefully remiss in establishing a permanent keeping place.
So, the Kings Domain Resting Place with its modest monument speaks to more than just the 38 Indigenous people – from various parts of the continent – who have been buried there since 22 November 1985. That was when Indigenous activists, having successfully taken legal action to remove the bodies (many stolen from ancestral burial grounds by bone collector Murray Black) from the University of Melbourne, ceremonially proceeded to rebury them in Kings Domain.

The reclaiming and repatriation of Indigenous remains coincided with a new generation of Indigenous land rights and social justice activism in the wake of the 1967 “citizenship referendum” and the 1972 establishment of the Aboriginal Tent Embassy.

Gary Foley, a leading activist who was central to the land and civil rights, and repatriation, struggles is referenced in the commonwealth’s statement of the broader historical significance of Kings Domain Resting Place. It quotes him:

“This … generated a major cultural, artistic and intellectual revival in Aboriginal Australia which led to a challenge of all institutions that Indigenous people regarded as involved in the cultural oppression of the Indigenous community.”

And, so, in the mid-1980s Museum Victoria started to become custodian for remains that were (often reluctantly) surrendered by the university, Freemason’s lodges, the state coroner and members of the public.

The 38 interred in the domain are representative of those thousands that remained in the museum – and the thousands still held elsewhere – until provenance of country could or can be determined.

The federal government has long been shamefully remiss in establishing a permanent keeping place, having turned its back on the urgent need for a structure of national significance in which to respectfully inter the bodies of many thousands of Aboriginal and Torres Strait Islander people whose remains were stolen or displaced.

It is a disturbing fact that so many Indigenous ancestral remains are still kept in cardboard boxes at major Australian collecting institutions.

Some were stolen from traditional burial sites, morgues and other state institutions to meet demand for a gruesome 19th and 20th century international markets for Indigenous remains, especially skulls. Others were displaced during the construction of roads and buildings, and through mining.

The South Australian Museum, for example, has the remains of some 3,000 to 5,000 individuals stored in cardboard boxes in a room in its overflow storage warehouse. Similarly, the National Museum of Australia stores about 500 sets of Indigenous remains at its warehouse in outer-Canberra.

It emerged last week that in Fitzroy Crossing, Western Australia, the remains of about 50 Aboriginal people, their bones uncovered by erosion, are being stored in boxes inside a shipping container.

Those currently kept in museums, some having been repatriated from medical and collecting institutions overseas, often can’t be provenanced to specific country. Indigenous belief holds that a spirit will be restless until the body to which it attaches is reconnected with country upon death.

It’s more than three years since the commonwealth’s committee on Indigenous repatriation recommended the government invest in a keeping place in Canberra for the remains that can’t, for various reasons, be reunited with country. The government has not yet formally responded.

A simple but telling point must be made: no government in Australia would act with such flagrant disregard and disrespect to the dead if they were other than Aboriginal and Torres Strait Islanders.

The way supposedly civilised societies treat the dead is surely a window onto how they view the living.

The official acknowledgment of the historical import of the Indigenous repatriation tragedy as symbolised in Melbourne’s landscape is an important moment.

But the commonwealth is decades – some would say centuries – overdue when it comes to bringing dignity and more permanent closure to the sad and shameful issue of this continent’s stolen Indigenous dead.