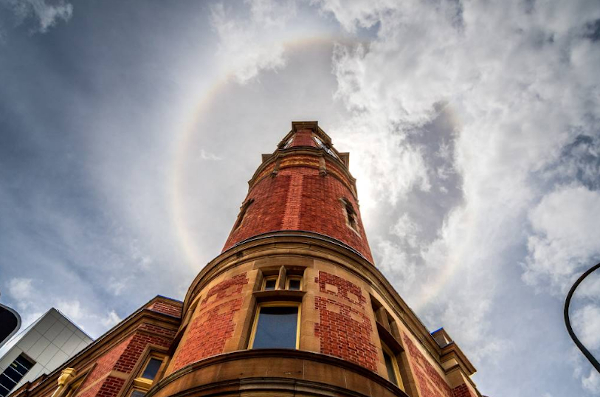 If you happened to stare into the sky on Sunday in Launceston you may have seen an optical phenomenon – a sun halo.

A 22-degree sun halo to be exact. It is a large white ring formed when light is bent as it passes through million of high-altitude hexagonal ice crystals suspended in the atmosphere. 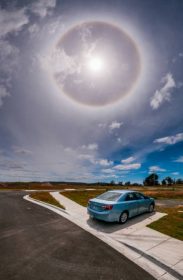 The ring appears whitish, except for a narrow tinge of red on the inside and violet on the outside of a sun halo.

It gets its name as it’s equal in distance around the sun to the apparent distance between your thumb and little finger when your outstretched hand is held at arm’s length.

The Queen Victoria Museum and Art Gallery astronomer Dr Martin George said depending on where you viewed it from.

“It really depends on the ice crystals being in the atmosphere basically above where you are,” he said.

“So, for example, you might go some distance away to even another part Tasmania and you might not see anything, but if the ice crystals are suspended over a broad area, quite a number of people might see it.

“It is more of a local phenomenon and they are they can be very short-lived to.”

Dr George said there were two halo phenomenons, the 22-degree and the 46-degree halo, with the first being much more common.

“Now the reason we say 22 degrees, is that if you took the one, the line from the halo to your eye and back to the sun. If you can imagine drawing it on a bit of paper, the angle, it would be 22 degrees,” he said.