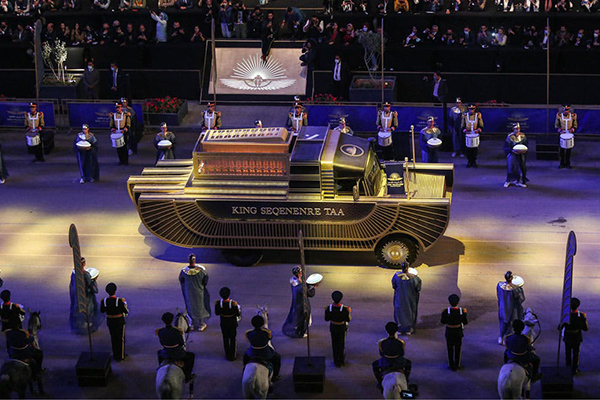 A specially designed vehicle transports the mummy of King Seqenenre Taa from the Egyptian Museum in downtown Cairo to the new National Museum of Egyptian Civilization in Fustat on 3 April 2021. Photo: Islam Safwat/Getty Images.

In Egypt, a motorcade of mummies says more about the modern nation than the ancient past, Apollo,  7 April 2021

A correspondent in Cairo.

Last weekend the mummies of 22 of the ancient kings and queens of Egypt were finally transferred from the Egyptian Museum in the heart of Cairo to their new home, the National Museum of Egyptian Civilization (NMEC) in Fustat, the first capital city of Muslim Egypt. Their voyage had been delayed several times. The big day was originally slated for 27 November 2020, and downtown Cairo had been re-painted, re-lit, and re-planted in anticipation. Midan Tahrir, the city’s main square, had been given an ancient obelisk and sphinxes earlier in the year and was decorated with viewing stands and triumphal arches for the parade. Midnight rehearsals for the ‘Golden Parade’ disrupted residents’ sleep for weeks, before it was postponed at short notice – downtown gossip had it that it clashed with two Egyptian football teams going head to head in the African Champions League the same night. The decorations were quietly dismantled in December.

The move of the mummies to the NMEC, which is now nearing completion after almost 20 years of construction, has been on the cards for a decade or so. An ambitious programme of museum building all over Egypt has emptied the Egyptian Museum of many of its best-known objects: even the Mask of Tutankhamun is destined for display in the Grand Egyptian Museum, which has been opening ‘next year’ since 2016. Taking a longer perspective, however, one should not assume that the NMEC will be the mummies’ eternal home: they have been moved from place to place, on and off display, for the last 140-odd years.

The famous discovery of two ‘caches’ of royal mummies in Luxor in the late 19th century has long underpinned Egyptological anecdotage. Was one cache truly found by a tomb robber looking for a lost goat? Did the people of Luxor actually line the Nile, wailing and mourning, as officials from the Service des Antiquités loaded their kings onto a steamer? Were the mummies really denied entry to Cairo until customs duties were paid on them – a bureaucratic tussle said to have ended with them being taxed as ‘dried fish’? Once safely in a museum, though, Egyptologists lost little time in unwrapping, measuring, and photographing them. Scholarly catalogues describe their bodies in dispassionate prose, from the ‘Armenoid’ jaw of Akhenaten to the ‘pendulous breasts’ of Queen Nodjmet. With the mummies on display in a succession of museums before entering the current Egyptian Museum in 1902, visitors could put desiccated faces to some of the great names of ancient history, and even (perhaps) the Bible. Ramesses the Great! Hatshepsut! Amenhoteps One to Three! Did King Merenptah’s salty crust come from his embalming, or was he the Pharaoh whom Moses drowned in the Red Sea? 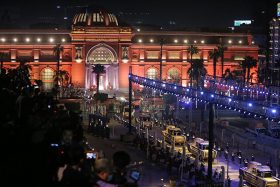 Twenty-two royal mummies being paraded from their home at the Egyptian Museum in downtown Cairo to the National Museum of Egyptian Civilization (NMEC) in Fustat, in the ‘Pharaohs’ Golden Parade’ on 3 April. Photo: Islam Safwat/Getty Images.

Many Egyptians were uneasy at the idea of their ancient kings being put on display, however, and the royal mummies were removed from display in the 1920s. This climate, influenced by religious feelings and national pride in a newly independent Egypt, also ensured that Tutankhamun’s recently discovered body was allowed to stay in his tomb. There it still rests, although it is now on view in a glass case in a corner of one chamber. At one point in the 1930s, the royal mummies were transferred a few blocks south to the pharaonic-style mausoleum of Nationalist leader Saad Zaghlul, a ‘reburial’ that also happened to be a nifty piece of political manoeuvring by Zaghlul’s opponents bent on denying his followers a shrine to rally around. After the Second World War they were put back on display in the Egyptian Museum; in 1980 President Anwar Sadat ordered their reburial on religious grounds – a sentence that was commuted to a return to the storerooms after his death the following year (one of Sadat’s assassins said ‘I have killed Pharaoh’, a reminder that the Pharaoh of the Old Testament and Qur’an is a byword for tyranny). New airtight display cases were constructed in the 1990s in consultation with the Getty Conservation Institute, and the royal mummies went back on display in the Egyptian Museum in a new gallery: a $10 supplementary ticket, and a ban on photography and guiding, aimed to keep the space ‘serene’.

If the departure of the royal mummies to the NMEC is just the latest in a series of moves, yesterday’s procession broke with tradition. The decorations were put up again in Midan Tahrir a week before the parade took place, and rehearsals competed once more with Cairo’s nightlife. This time there were no hooting steamers or lines of mourners (beautifully rendered in Shadi Abdel Salam’s Nasser-era film The Night of Counting the Years). In the end more than six million dollars was spent on the lavish ceremony. Equal parts Aida, Ru Paul, and Leni Riefenstahl, it combined marching bands, replica pharaonic chariots made by the Ministry of Military Production, wide-eyed children, synchronised lighting, and a line-up of famous Egyptian actors and singers. Egyptian superstar Mohamed Mounir, in his fifth decade of performing and looking lightly mummified himself, sat swathed in white robes on a funerary barque in the Nile to sing extracts of the Negative Confession (a pharaonic funerary spell from the so-called Book of the Dead), while pre-filmed segments from the Pyramids and the temple of Deir el-Bahari were beamed in to fill the time from the departure of the mummies at the Egyptian Museum to their arrival in the NMEC. Wrapped in the Egyptian flag and accompanied by a conservator, each mummy got to ride in one of a motorcade of military vehicles, converted into floats by MDF toppers emblazoned with gold-painted pharaonic motifs. Placards in Arabic, hieroglyphs, and English identified their occupants as they rumbled off to the NMEC.

Some of the informal settlements near the NMEC were demolished before the parade and hastily covered with sand, making a Potemkin oasis for the cameras: the parade was not intended for actual Cairene spectators, who were kept away from Midan Tahrir and the route of the trucks by a heavy police presence, but for edited broadcast. Its first audience was at the NMEC, where a cavernous room full of masked dignitaries, including the Director-General of UNESCO, the Saudi and Greek ministers of tourism, and sundry members of the corps diplomatique (summoned to attend, with negative PCR test, at three days’ notice), sat socially distanced in plush chairs and watched the pageant projected behind the star of the show – not the pharaohs themselves, but President Abdel Fattah el-Sisi.

With no images of the royal mummies actually shown in the parade, the broadcast gave full coverage to President Sisi, heir to the pharaohs. Viewers watched him impassively watching the parade, then striding dynamically through the corridors of the NMEC to receive the procession. The hosts of the ceremony lost no opportunity in drawing parallels between ancient and modern Egypt: the strength and durability of its monuments; ancient Egypt as ‘a strong state, built on knowledge and faith’; and the President was shown an image of Tutankhamun ‘killing evil to establish a strong state’. What we make of the past always turns out to be what we are trying to make of the present.

While for overseas consumption the parade was intended to revitalise a tourism industry wrecked by the coronavirus pandemic, at home the nationalistic underpinnings of the parade were lost on few – and appreciated by many. Egyptians’ online responses to the live streams of the event expressed pride in the country and congratulated the performers – dislike of Turkey, viewed as Egypt’s rival in the region, receiving an honourable mention. Few Egyptologists seemed willing to address the ironies of the parade. However, Egypt is facing the problems of a rapidly growing population, high youth unemployment, UN and EU criticism of its human rights record, a stagnant private sector, and a loss of Nile water to the newly completed Grand Ethiopian Renaissance Dam: will a return to the muscular clarity of Pharaonism help or hinder? If only the royal mummies, whom you imagine would understand and sympathise with the President’s position more than anyone, could speak.