A return to country 200 years 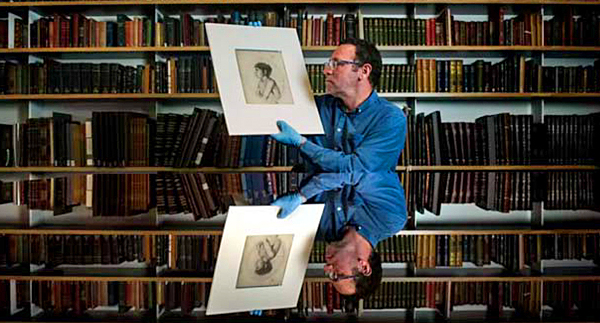 A rare portrait of Toulgra, an Aboriginal youth suspected of being involved in resistance against early settlers on the Hawkesbury River. It was purchased by the State Library of NSW. Photo: Steven Siewert.

A pencil drawing of a 14- or 15-year-old Aboriginal teenager named Toulgra, who was later sent to Norfolk Island on suspicion of being involved in colonial wars during the “secret river” days of the early colony,  has been acquired by the State Library of NSW for $237,000.

The 1802 drawing by French artist Nicolas-Martin Petit, an artist on Nicolas Baudin’s expedition to Australia, is considered unique and highly significant, said library staff. It was found between the pages of a book in Bath, Britain.

Compared to other Indigenous portraits of the time, the pencil drawing is neither cartoonish nor heroic. What made it so “wonderful and special” was that it was “loving and sympathetic”, said Ronald Briggs, a curator at the State Library of NSW and an Indigenous services librarian.

He said Toulgra received a “warm welcome back to country” when the portrait arrived in Australia.

To historian Professor Grace Karskens, the portrait of Toulgra is as beautiful as it is important.

“For too long white people have written about Aboriginal people as one undifferentiated group. It is time we recognised there were individuals with names, and personalities and lives. To have a portrait of a named individual is wonderful,” she said.

Petit spent a day drawing Toulgra, the nephew of Bennelong, when the French expedition visited Parramatta. The drawing shows a slightly pudgy and vulnerable boy on the cusp of manhood. It was reproduced a few years later in a French book about the voyage, but the engraver chose to make Toulgra look more muscular and aggressive than he appeared in the original sketch.

In contrast to the warmth of the Toulgra drawing, another newly purchased sketch by the artist Richard Read snr in 1824 shows a man known derogatorily as “Bugger Bugger” with two barbed spears typical of the Sydney region.

“Petit was only about 10 years older than Toulgra, but he was a professional artist who had been told to make his drawings as accurate as possible,” Mr Briggs said. “And the scientists back home [in France] told the artists to make their artwork as close to real life as possible so that we know exactly how people look.”

Toulgra was Bennelong’s nephew, and a friend of Musquito, who was thought to be a leader of resistance against colonial settlement on Aboriginal lands.

“Fires were being started, people being speared in their huts. There are no official records but we know Aboriginal people were being killed as well,” Mr Briggs said.

Toulgra and Musquito didn’t go to trial before they were sent to Norfolk because they couldn’t swear on the Bible. They didn’t believe in God.

Although Toulgra was sent to Norfolk, it is unclear whether he was really a ringleader.
As a young man who had already been initiated, though, he would have been caught up in frontier conflict over land and food. “It would have been bitter and bloody,” Professor Karskens, from the University of NSW, said.

The drawing is expected to help researchers study the colonial wars.

Professor Karskens was last year awarded a fellowship to use the library’s collection to research a long lost list of 180 Aboriginal place names for areas on the Hawkesbury, and to tell the stories of those places and the people who lived there.

“Names mark our landscape,” Karskens said.  Following in the footsteps of Kate Grenville’s historical novel about 19th century settlers on the Hawkesbury, Professor Karsken’s project is called the The Real Secret River, Dyarubbin.