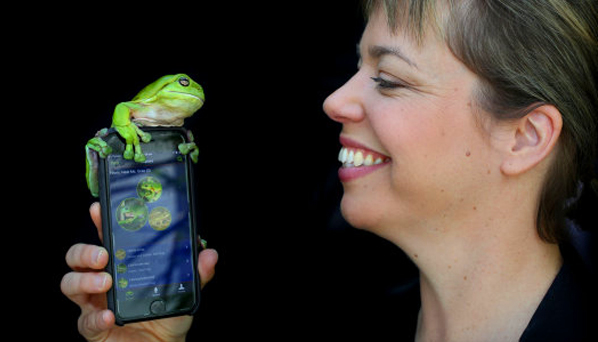 The Australian Museum’s Dr Jodi Rowley, celebrates the launch of FrogID, an app developed by the museum and IBM that will be used to encourage children and their families to identify unknown frog species.

Frog ponds are set to become the new vegetable patch in Australian schools as students hop on board the latest craze.

Ponds will be built and developed across the country as part of a new partnership involving the Australian Museum, launched at a school in Sydney’s inner west on Tuesday.

The program is part of an initiative to get children and their families involved in helping scientists identify unknown frog species, especially in remote places.

It’s mostly done through an app called FrogID, developed by the museum and tech giant IBM, that records and identifies frogs by their call.

More than 20,000 recordings have been made since its November launch.

Australia has 240 known species of frogs but many more remain undiscovered, according to Australian Museum‘s amphibian expert Jodi Rowley.

“Frogs are yelling at us what species they are so all we have to do is press record,” Dr Rowley said.

Students Ruby Harris and Mabel Furno, from Camdenville Primary in Newtown, are fans of the Bunnings-built ponds.

“We have done a fair bit of work to try and regenerate the population of frogs in our area so if they just got wiped out it would make me feel very sad,” 10-year-old Ruby said.

Principal Sue Smith hopes her school’s focus on environmental education will help the children build a level of empathy for nature.

“We’ve also got insect hotels, we’ve got school gardens, lizards, and fish in our ponds to help children recognise their place in the world as part of nature,” Ms Smith told AAP.

“Frogs are barometers of environmental health so if we can encourage more biodiversity in our cities then we will improve our lifestyles and health.”

It follows the success of vegetable patches in schools, an idea pioneered by acclaimed cook Stephanie Alexander to help address the issue of obesity.

Her Kitchen Garden School program has been rolled out across more than 1600 schools and early learning centres since it was launched over a decade ago, and has inspired many other similar programs – some backed by government – around Australia.