You are here: Home » Articles filed under: 'News' » Article: 'The Seamstress' 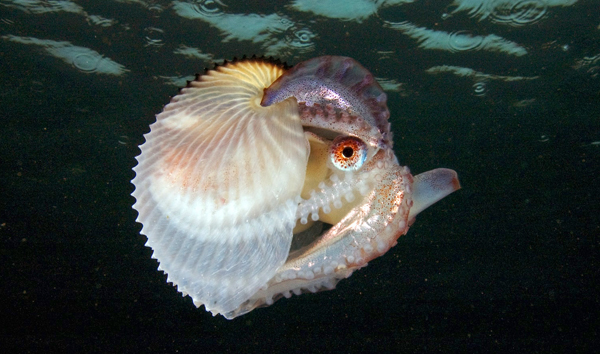 Lauren J. Young, The Seamstress And The Secrets Of The Argonaut Shell, Science Friday, June 2108

Known since Aristotle, no one understood the argonaut octopus—until a 19th-century seamstress turned naturalist took it upon herself to solve its mysteries. 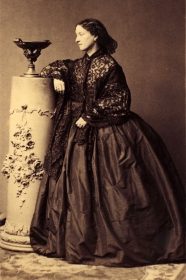 The ancient Greeks were masters of creating legends of the sea. In the epic quest, Jason and the Argonauts, a band of heroes aboard the Argo sailed the seas searching for the Golden Fleece that would grant Jason the authority of kingship. But these intrepid sailors aren’t the only nautical argonauts of Greek mythology.

The argonaut octopus, of the family Argonautidae, belongs to a group of pale pink-spotted octopuses. Unlike the heroes that sailed the Argo, these octopuses are known for traversing the open ocean by way of a delicate, curved, creamy white vessel—an external casing, often referred to as a “shell,” that gave them their common nickname, the “paper nautilus.” These creatures baffled naturalists and philosophers for two millennia, even fooling Aristotle, who believed that they used their large pair of webbed dorsal arms as “a sail” to catch the briny breeze and floated across the ocean’s surface like paper boats. These myths carried weight for centuries, even among naturalists in the 19th century.

“This octopus was a problem because the descriptions were a little funny with the scientists describing it often with old, antique description—sketching it as a sailing octopus,” says Josquin Debaz, a science historian at the School for Advanced Studies in the Social Sciences in France.

It wasn’t until the early 1830s when self-taught French naturalist, Jeanne Villepreux-Power began researching the Argonauta argo, or the greater argonaut, that we learned the true origins of their “shells.” Along the way, Villepreux-Power tried new methods for studying sea creatures that gave insights not just into the paper nautilus, but also helped us to better understand other creatures of the sea today.

The Mother Of Aquariums

For about a decade, Villepreux-Power closely studied these “suspicious” yet “graceful” creatures. She became intimately acquainted with them, examining, experimenting, and describing everything from their feeding behaviors, movements, growth, and development. Unlike her predecessors, Villepreux-Power did not turn to dead specimens preserved in jars or “shells” washed up on the shore. She was determined to find a way to bring live specimens to the lab—and in the process, became one of the leading figures in a nascent aquarium boom. In fact, 19th-century English biologist and founder of the Natural History Museum of London Richard Owen referred to her as the “Mother of Aquariophily.”

“In her era, it was extremely unusual for a woman to get that opportunity at all, but it’s really nice to see that even then she could seize that opportunity and just be really good at it and be equal,” says Louise Allcock, an evolutionary biologist and cephalopod researcher at the National University of Ireland in Galway who wrote a paper cataloging Villepreux-Power’s work.

Neither Paper Nor Nautilus

The four known living species of paper nautilus reside in tropical, subtropical, and temperate waters around the world. They feed on small crustaceans, mollusks, and jellyfish, using poison to immobilize their prey. Although they are rarely seen by humans in the wild, their “shells” have been collected in large numbers on beaches across the globe, sticking up from the sand like little cream-colored cornucopias. The abundance of shells washed up on shores after storms have led some to speculate that the argonauts may actually be quite common in the ocean.

But the “shell” of a paper nautilus isn’t a shell at all. And confusingly, the paper nautilus is only distantly related to the chambered nautilus, the only living cephalopod with a true external shell, explains Allcock. Instead, the female paper nautilus carries a calcite egg case that protects and holds its eggs, because unlike bottom living octopuses, they dwell in the open ocean.

The female argonauts must have a way of brooding eggs in a structure that isn’t a cave or a den, says Julian Finn, senior curator of marine invertebrates at the Museum of Victoria in Melbourne. And they could be carrying a hefty load of precious cargo: Females can produce up to a million eggs in a lifetime, with individuals in some species found holding over 170,000 eggs at a time. “So the shell allows her to protect those eggs as they develop until they hatch,” Finn says.

In addition to holding eggs, the case helps the females stay buoyant in the open ocean. On dives, Finn has witnessed and described how the argonaut  “gulps” and traps air in the egg case, allowing it to float, not on the surface as folklore depicted, but in the water column at neutral buoyancy. It’s more like Alexander the Great’s bathysphere than Aristotle’s sailing boat, Finn writes in Australian Science.

This thin, nearly translucent egg case plays an essential role in a female argonaut’s life cycle. But one big mystery divided scientists for centuries: Where did the shell come from?

In the 1800s, most scientists believed that the shell was made by another animal—that argonauts lived in them the same way that a hermit crab will go find a snail shell or a mollusk shell to live in, Finn says. Once the octopus grew too large for the shell, it would abandon the shelter and either search, steal, or kill the original inhabitant for a larger shell.

But, Jeanne Villepreux-Power sided with the opposite side of the debate: The argonauts were the builders of their cases.

“Everybody had their different opinions, but she took sort of an experimental approach and she broke it down and looked at it,” Finn says.

A Journey To The Sea

Villepreux-Power grew up nowhere near the ocean. Born on September 25, 1794 in the rural countryside of Juillac in central France, she came from a poor family and never received any formal education, explains Josquin Debaz. Eventually becoming a skilled seamstress and embroiderer in Paris, she worked on a wedding gown for a royal marriage where she met her husband, an Irish merchant James Power.

In 1816, Villepreux-Power moved to the Sicilian city of Messina. She drank up Sicily’s natural history and “she went all around the island and developed a good collection of minerals, plants, and animals,” Debaz explains.

Living near the seaside, Villepreux-Power wrote how the sea was as transparent and smooth as glass—it was so serene that she could see the smallest objects and most minute movements deep beneath the surface. Messina’s enclosed, sheltered bay provided ideal conditions for Villepreux-Power to make accurate observations on marine life. She wrote extensively on various species of marine mollusks and animals—including the common octopus (Octopus vulgaris). But Villepreux-Power was continuously drawn back to her “favorite the Polpo dell Argonauta.”