You are here: Home » Articles filed under: 'News' » Article: '25 years of inspiration'

Questacon – Australia’s National Science and Technology Centre – is currently celebrating its 25th year of service to the community.

Minister for Industry, Ian Macfarlane, congratulated Questacon on reaching the milestone, saying Questacon took up the challenge to engage and excite Australians about science 25 years ago, and it has delivered outstanding results ever since.

Mr Macfarlane said Questacon had delivered more than 100 million hours of inspiring science experiences across Australia and around the world.

“Most importantly, it makes science fun and gets the thumbs up from the thousands of school kids who stream through its doors each year,” he said.

“Australia needs to encourage our next wave of scientific talent to stay globally competitive, and Questacon plays a crucial role in helping us do that.”

He said it was opened on 23 November in 1988 as a joint Australia–Japan Bicentennial Project, with Japan contributing half the $19.64m construction cost as a gift to Australia.

“Over 26 million people have interacted with our programs and exhibitions, and we’ve delivered over 100 million hours of inspiring science experiences,” he said.

Professor Durant said Questacon was very proud of its achievements in its first 25 years, but the job of inspiring tomorrow’s scientists was as important as ever to ensure Australia keeps moving forward.

The celebrations at Questacon will go on all year – see their website for more information and to share your memories of Questacon. 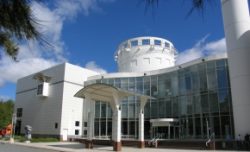 Source: Questacon
Positions Vacant » View All
» Exhibition Experience Developer – Te Papa
» Operations & Science Centre Mgr – Otago Museum
Latest News » View All
MA Museums Change Lives Awards
2021 Shortlist announced Read more.
Tattooing as a cultural phenomenon & art
form – historic & current challenges Read more.
Oriel College’s retain & explain plaque for
Cecil Rhodes statue – what’s balance? Read more.
City of London to retain & explain statues
- Guildhall’s slave trader policy reversal Read more.
What to do if you find fossils or artefacts
A history worth protecting Read more.
Top +
Council of Australasian Museum Directors, c/o Ms Daryl Karp, Museum of Australian Democracy at Old Parliament House PO Box 3934 Manuka, Australian Capital Territory 2603 Australia, © CAMD 2021
Copyright: All information and resources provided on this website remain the copyright of the Council of Australasian Museum Directors. Permission is granted for viewing and downloading for personal and not for profit purposes. Those wishing to reproduce any materials for commercial, educational or other uses are requested to contact us.
Disclaimer: The content of this website is provided for information purposes only and is not intended as a substitute for professional advice. No claim is made as to the accuracy or authenticity of the content of the website. The Council of Australasian Museum Directors does not accept any liability to any person for the information or advice (or the use of such information or advice) which is provided on this website. The information on our website is provided on the basis that all persons accessing the site undertake responsibility for assessing the relevance and accuracy of its content. No responsibility is taken for any information or services which may appear on any linked web sites. Hostgator.
.