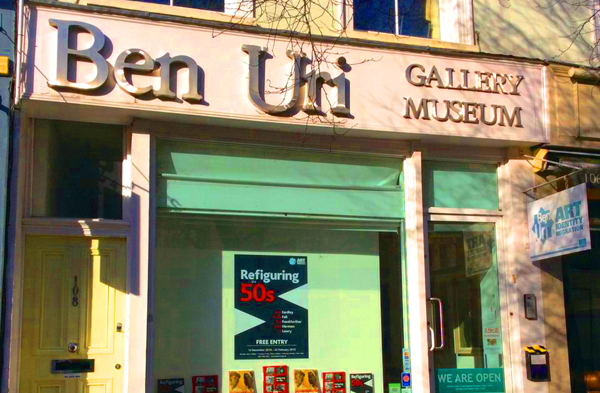 Eleven high-profile members of the international advisory panel of the Ben Uri Gallery and Museum in north London—including Nicholas Serota, the chair of Arts Council England— have resigned in protest at the decision by the museum board to sell off works from the collection at Sotheby’s London. Twenty four works, including paintings by David Bomberg and Mark Gertler, are due to go under the hammer today, tomorrow and on 13 December; the sales are expected to raise around £1.3m.

“We were not consulted in advance on the proposed sales and believe that sales of such important works from the collection are a grave mistake. We believe that these sales will undermine the ability of the trustees to secure future gifts and a future home for the collection,” say the outgoing members in a statement. These also include Bruce Boucher, the director of Sir John Soane’s Museum in London, professor Griselda Pollock of the University of Leeds and the independent curator Norman Rosenthal.

The disposal, part of a long-term plan to deaccession around 700 pieces, represents a strategic change of direction for the museum, which intends to use the money raised to transform itself into a centre of research, acquisition and display for art made by immigrants to Britain since 1900, regardless of religion, and to establish an arts and dementia institute which will run art therapy sessions in dementia care centres. Hundreds of other works will be donated to other museums and community centres.

“We admire and are grateful for the way that the trustees of the Ben Uri have sustained the organisation over the past fifteen years,” the members add. “There have been many achievements with some important exhibitions and publications… But we are unable to support the sale of works which we believe make up the very heart of the Ben Uri collection.”

The Ben Uri Gallery and Museum was founded a century ago in East London to help Jewish immigrants gain access to the arts and to support Jewish artists. It moved to Dean Street in Soho in 1964 and remained there until 1996. It then closed for six years before reopening its current space in St John’s Wood in 2002, where it draws 10,000 visitors annually.

David Glasser, the museum’s executive chairman, took the decision to change the institution’s focus along with three other trustees (two senior professional colleagues and an independent observer oversee all decisions). “We regret this news and respect our eleven colleagues’ views and thank them for their new scale of interest. However, the seven-strong Ben Uri management and trustee team fundamentally disagree,” he says.

“Irrespective of the achievements made in the past 16 years, insufficient charitable funds have been directed to secure its future as we still operate out of a small poorly located rented space which has long been known as unsustainable long term,” Glasser says, saying that full details of the strategy pack referencing the Sotheby’s sale were sent to all panel members, of which there are 26 in total.

“The trustees alongside senior professional management believe the case of Ben Uri securing its meaningful future is imperative and infinitely greater public benefit will be generated by reinvesting proceeds in our research and wider collecting policies than holding these works that are seldom exhibited,” he says.

Glasser does not accept the suggestion that the works consigned to Sotheby’s represent the very heart of the collection. “We have in the past 16 years increased the holdings of Bomberg by ten [more] works, including the extraordinary portrait of east end intellectual, John Rodker from 1930 and his master work Racehorses from 1913 which add to our long time signature work Ghetto Theatre (1920),” Glasser says.

The museum has also added two major works by Frank Auerbach and three early seminal rabbinical scenes by Alfred Wolmark. “These, and renowned works by Chagall, Epstein, Grosz, Herman, Rosenberg and Soutine to name just a few of the 300 works added to the collection since 2002, contradict this suggestion,” Glasser says.