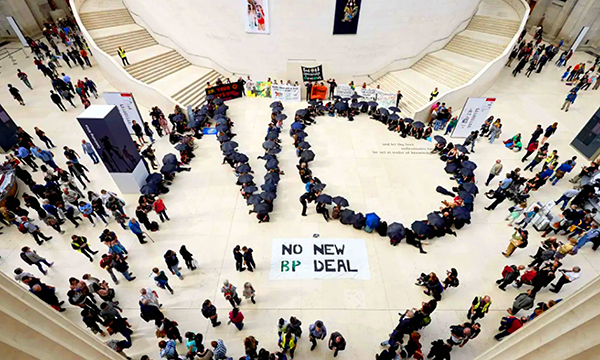 The clamour for the restitution of treasures and axing of corporate sponsors is a mindless act of cultural vandalism.

One morning a few years ago, I woke up to see a first shaft of light catching the red granite head of Amenhotep III, a pharaoh who ruled Egypt 3,400 years ago. My middle daughter and I had taken part in a sleepover at the British Museum, and though my back was stiff from the thin air-mattress, my head was light with happiness. There I was, and there this massive sculpture stood, making a connection over millennia.

And now I wonder how long we will take, at the rate we’re going, to destroy the institutions that make encounters like this possible. At what stage will we have driven away their sponsors, purged their boards of useful supporters, dispersed their greatest objects once again and turned their concourses over to the kind of activists for whom “debate” usually means “you listen to me”?

In 2019 hardly a week passes without a story about someone trying, out of a sense of righteousness, to make the job of running and funding a great museum or gallery more difficult. These days they seem to be succeeding. Next month, some of the museums themselves look set to take a step that could make things even worse.

Before I get to the self-harm, let’s recapitulate what’s been going on. I’ll start with sponsorship. No government in the western world, as far as I know, gives 100 per cent subsidies to its museums and galleries. In the last financial year, for example, the British Museum spent £96.2 million (a reduction on the previous year) and received £53 million from the government. So it had to find £43 million from other sources.

The arts and museum sectors, some more than others, have long been the recipients of private or corporate philanthropy. In fact, without this money the galleries and museums would be shadows of what we see today — worse collections, poorly housed, with considerably less reach into the community. Many wouldn’t exist at all.

Just this year we have had the business of the anathematisation of anything with the Sackler name on it because of that family’s association with Purdue Pharma, the manufacturers of prescription opioids. Led by the American photographer Nan Goldin, campaigners have succeeded in largely driving the Sacklers out of arts philanthropy. Our own National Portrait Gallery turned down a £1 million donation, the Tate group announced that it would take no further money from the Sacklers, as did the Guggenheim in New York. In Paris the Louvre“disappeared” the Sackler name from every place in the museum where it had been inscribed. “It shows direct action works,” said Goldin. At which point the Sackler Trust, one of the family charities, suspended all new grants to UK arts bodies.

This year climate change protesters targeted BP’s sponsorship of the British Museum’s Ashurbanipal exhibition. As an oil company, BP is held to contribute to global warming and profit from it and thus is an unacceptable source of finance. When the museum refused to cut ties with BP, the Egyptian novelist Ahdaf Soueif resigned as a trustee, citing this refusal as one piece of evidence among many of the institution, “born and bred in empire and colonial practice”, failing to take action in redress. Soueif was supported by some staff, who claimed that the sponsorship allowed BP to “propagate the myth that without the company we would not have access to the collections of our publicly funded museums and galleries”.

Soueif’s other concern seemed to be restitution, the demand that western museums “return” items collected to the countries in which they were made or from which they were taken. Obviously the most famous examples in Britain are the Elgin Marbles from the Parthenon, the Rosetta Stone, the Easter Island “Moai” statue and the Benin Bronzes, but there really is almost no end to this. Recently the Jamaican minister of culture stood up in parliament in Kingston and demanded the return of artefacts found on the island in 1792.

When discussing this with people I know, I am staggered sometimes by the carelessness with which they treat this issue. It often just amounts to “give it back, it’s only fair”. I usually ask them if they want the horses of St Mark in Venice to be returned to Istanbul, from where they were looted in 1204.

Of course there sometimes should be restitution but it is astonishing how people cannot see that institutions like the British Museum are themselves priceless artefacts, as important as any temple or pyramid.

As Soueif was leaving her trustee position in London, Warren Kanders was leaving his at the Whitney Museum of American Art in New York. The vice-chairman had been forced out after a campaign by people protesting that he was unfit to serve because he is the chief executive of a company that makes equipment for law-enforcement agencies, including tear gas canisters. His actual performance in the job was not a consideration.

Some of those who campaigned for him to go were also involved two years ago in trying to get the Whitney not to exhibit a painting called Open Casket, which represented the battered face of the lynched black teenager, Emmett Till. The apparent offence was that the artist was white.

There are dozens more examples. And on September 7, delegates to the International Council of Museums (ICOM) meet in Kyoto to talk about a new definition of what a museum is. The problem is that the old one — an institution that “acquires, conserves, researches, communicates, and exhibits the tangible and intangible heritage of humanity and its environment for the purposes of education, study, and enjoyment” — seems a good one. The proposed new definition says instead that “museums are democratising, inclusive, and polyphonic spaces for critical dialogue about the pasts and the futures”.

I detect the deadening hand of self-righteous activism in this formulation. For example, the British site for ICOM trails an event for curators in Norway in October in which the question will be asked, “How can museums become ‘contact zones’ where science and education, activism and entertainment, debate and tourism interact productively?”

And I know they don’t mean “debate”. They mean activists telling you what to think. They mean that museums and galleries should be politicised. And if you turn up and debate incorrectly, don’t expect the polyphony to include you.

As the model train enthusiasts of Market Deeping discovered in May, things built painstakingly over time can be destroyed in minutes by the careless and the vandalistic. Note how those who say “don’t take money from X and Y!” never have any useful suggestions about how to replace it. How those who demand “give it back” never really understand what they’re taking it away from — how they could lose Amenhotep’s gigantic inscrutable face and wouldn’t really care.