You are here: Home » Articles filed under: 'News' » Article: '30 million hours of inspiration!'

There is a curious omission in Australia and New Zealand when it comes to public policy about culture.  Museums rarely feature, or if they do, it is as an afterthought.  The discussion document for the formulation of the Australia’s National Cultural Policy (the completion of which is delayed) hardly mentioned museums, yet they represent a powerful cultural asset with a breadth of audience that few other providers could match.  There were 14.5 million visitors to the 22 member museums of CAMD, the Council of Australasian Museum Directors, in its latest survey.  With an average visit lasting between two and three hours, that is over 30 million hours of inspiration.

Inspiration?  Certainly!  Every survey shows that what draws people to visit museums is a blend of enjoyment and enlightenment.  Every visitor leaves with more than they arrived with.  That also applies to online visitors.  In the same period there were also 36 million user sessions on websites developed by the large museums in Australia and New Zealand that are members of CAMD.  The resources available on the web are getting richer all the time as more and more collections are digitised and placed online.  Museums are generators of new knowledge- no less than 512 research projects were underway in the survey period (2009-10).  They involve communities in their operations – 4,739 people contributed their time (448,322 hours in total).  They are a powerful educational resource, for the numbers of visitors included 1.4 million students.  They constitute a vital component of the tourist industry with 5.8 million visits.  When all the medium-sized and smaller community museums are added- and there are hundreds of these- the reach of museums is formidable.

So why aren’t museums seen as major players in the cultural arena?  I think it is because their activities are so broad they do not fit easily into preconceptions of ‘culture’.  The big, long-established state museums in Australia and their cousins in New Zealand all include the natural sciences in their remit.  When it comes to defining culture, the natural sciences are discounted.  Yet, for the public at large, exhibitions on biodiversity, minerals, the marine environment, volcanoes and evolution are seen as essential ingredients of what they expect to find in a museum.  The museum may also include Indigenous cultures, design, film, archaeology etc that seem easier to include in culture.  Culture can be defined (according to the Macquarie Dictionary) as ‘the sum total of ways of living built up by a group of human beings, which is transmitted from one generation to the next’.  Scientific culture sits happily within that definition.  It’s time that ‘culture’ is no longer used an alternative to ‘the arts’ but encompasses the breadth of knowledge that museums represent, alongside their counterparts in galleries, concert halls, studios and theatres.  All of them enrich our lives and the breadth of experiences they offer reaches an extraordinarily wide public. 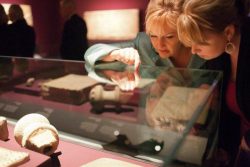 Wonders of Ancient Mesopotamia exhibition at Melbourne Museum 2012. Photo: Museum Victoria
Positions Vacant » View All
» Director – Museum of Australian Democracy
» Head of Aboriginal Heritage – MAGNT
Latest News » View All
PNGNMAG, AM & Flinders Univ collaborate
to describe extinct PNG kangaroo Read more.
Frogs that lay eggs on land – new WA genus
named for teacher whose lab was a campervan Read more.
ICOM to discuss museum governance in Prague
& need for explicit cultural governance code? Read more.
The Hermitage Dir’s views on Ukraine war &
the museum’s role in exporting culture Read more.
Future proposed for Old QM Building (OMB)
via Qld Govt & QYO $20M donor pledge Read more.
Top +
Council of Australasian Museum Directors c/o Mr Brian Oldman, South Australian Museum PO Box 234 Adelaide, South Australia 5001 Australia, © CAMD 2022
Copyright: All information and resources provided on this website remain the copyright of the Council of Australasian Museum Directors. Permission is granted for viewing and downloading for personal and not for profit purposes. Those wishing to reproduce any materials for commercial, educational or other uses are requested to contact us.
Disclaimer: The content of this website is provided for information purposes only and is not intended as a substitute for professional advice. No claim is made as to the accuracy or authenticity of the content of the website. The Council of Australasian Museum Directors does not accept any liability to any person for the information or advice (or the use of such information or advice) which is provided on this website. The information on our website is provided on the basis that all persons accessing the site undertake responsibility for assessing the relevance and accuracy of its content. No responsibility is taken for any information or services which may appear on any linked web sites. Hostgator.
.