30 years on the road 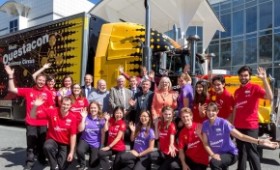 Today the Shell Questacon Science Circus celebrated 30 years of touring science experiences to regional communities across Australia. Local school children, invited guests and current and past presenters celebrated the programme’s achievements with a showcase of the most popular science exhibits and activities.

Set-up in 1985, the Shell Questacon Science Circus has reached more than 2.2 million Australians and visited over 500 regional towns and 90 remote Indigenous communities, with its brightly coloured semi-trailer driving hundreds of thousands of kilometres around the country.

“In 30 years, the Science Circus has covered the length and breadth of Australia, making science more accessible for all, and providing an opportunity for families to explore and enjoy science together,” said Professor Graham Durant AM, Director of Questacon – The National Science and Technology Centre.

At the core of the Science Circus is a drive to inspire young people to value and engage in science, technology, engineering and maths. The programme is delivered by a team of 15 enthusiastic science graduates who are studying a Masters of Science Communication Outreach at The Australian National University (ANU).

“The Science Circus presenters are wonderful role models for the variety of careers available in science and technology. In fact, several past presenters were originally inspired to study science by a Science Circus visit to their school,” said Professor Durant.

The Science Circus is delivered through a partnership between Questacon, Shell Australia and ANU.

“The success of the Science Circus is underpinned by this remarkable, 30-year partnership that exemplifies what can be achieved through a shared long-term commitment to science education by government, academia and industry,” said Professor Durant.

“The Shell Questacon Science Circus is an outstanding example of innovation in education. In its 30 years the programme has engaged with over two million Australians thanks to a group of 400 ANU science students who have delivered the programme.  Shell is incredibly proud of this partnership and of the amazing contribution it has made towards the promotion of science” said Andrew Smith, Country Chair Shell Australia.

“The Science Circus and the associated ANU course provide a rich training ground for young science communicators, providing real experience in many different aspects of the field. The programme boasts almost 400 graduates, many of whom hold influential positions in Australia and overseas in a variety of fields,” said Professor Durant.

ANU Vice-Chancellor Professor Ian Young AO said the ANU was proud to play a key role in the Science Circus, which was founded by Professor Mike Gore AO from ANU National Centre for Public Awareness of Science.

“With its team of young science communicators, the Science Circus has touched the lives of thousands of Australian children, helped change people’s perceptions about science, and has inspired many young people to pursue careers in science,” Professor Young said.

The Science Circus will continue its 2015 touring year in May, visiting regional communities in the Orana and New England regions of New South Wales.