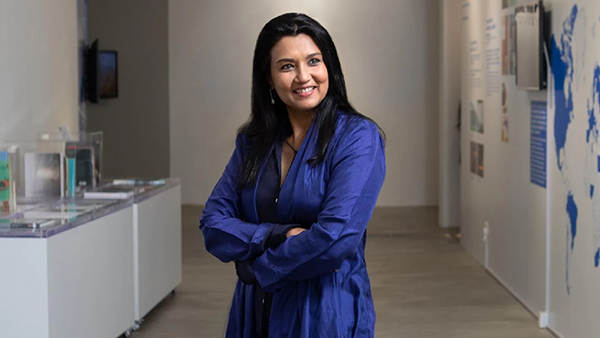 After more than five months of anti-government protests in Hong Kong, the Australian director of the city’s new M+ museum finds that she is living in interesting times.

Three years ago Suhanya Raffel, a former deputy director at the Art Gallery of NSW and at the Queensland Art Gallery/Gallery of Modern Art in Brisbane, took up her appointment in Hong Kong, where she is helping lead one of the world’s biggest cultural infrastructure projects. When M+ opens as expected in 2021, the $HK6.5bn ($1.2bn) museum will be Hong Kong’s first major institution for the visual arts.

Raffel, visiting Sydney last week, says the protests have been distressing to witness. “It’s a divided world that we’re living in and Hong Kong is mirroring those divisions; it’s like we are on a fault line,” she says. “In many ways there is enormous energy, but very sad to be seeing this amazing city being brought to this stage.”

Hong Kong’s finance and retail sectors, and tourists are staying away. But Raffel does not appear fazed by the upheaval; instead, she says the arrival of M+ could not be more timely. In a city that does not have large cultural institutions or a museum-going public, she says M+ offers a much-needed place of civic engagement.

“I feel as if we are in the middle of making history, and that the institution will be history-making as well,” she says. “For me, making a museum at this juncture is even more important. We need civic spaces where the institution is neutral, it’s not an instrument of any side. There are many opinions in there that are important for us to listen to, to be informed, and to have a more complex, calibrated understanding of what it means to be in Hong Kong, in greater China and the world.” 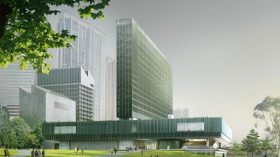 The Hong Kong Special Administrative Region is investing heavily in culture. The West Kowloon Cultural District, opposite Hong Kong Island, is a $HK21bn development where 40ha of reclaimed land is being transformed into a waterfront promenade, park­land and cultural venues including theatres, a traditional Chi­nese opera house, a branch of the Beijing Palace Museum and M+.

The museum, designed by Swiss architects Herzog & de Meuron, resembles an inverted T in profile, with a podium base topped with a thin, rectangular tower. When seen from the harbour, the tower looks like an enormous cinema screen or flat-screen TV. It is fitted with an LED system that will turn into a display of digital artworks.

Galleries and exhibition spaces will be housed in the podium level, and the complex will include three cinemas, a mediatheque, shops and restaurants, and research and conservation facilities.

M+ is described as a museum of visual culture, meaning that it will display not only fine art but also architecture, design and moving-image works. Its collection is modern and contemporary, starting from about 1950. At its core is a gift and purchased acquisition of 1500 works of modern Chinese art from Swiss businessman and diplomat Uli Sigg. Raffel says M+ has amassed about 7000 art objects and 35,000 archive materials, including work by Chinese artists Liu Wei, Ai Weiwei, Zhang Xiaogang and Xu Bing. Australian artists Fiona Hall, Tracey Moffatt and Daniel Crooks also are represented, as is architect Harry Seidler with his designs for the Hong Kong Club Building.

A recurring theme in stories about M+ is whether it will be a truly independent museum.

M+ has its own governing board and comes under the auspices of the West Kowloon Cultural District Authority, which in turn is a statutory body of the Hong Kong government. Raffel says M+ is at a remove from government, has a governance structure similar to that of cultural institutions elsewhere, and is “independent, absolutely”. Still, as Beijing tightens its grip on Hong Kong, the question arises about possible censorship of exhibitions at M+. Raffel says she is prepared for the eventuality.

“I think I will have to deal with it in one form or another,” she says. “I will see how it goes.” She expects that, in such a scenario, the board would become involved.

“You have to negotiate these spaces, you cannot be dogmatic and ideological,” she adds. “That’s what leads to the divided world. That’s why there is so much social unrest, because we have not been willing to see another point of view and make a dialogue about it.” But she insists that questions about political or other interference in M+ programs should be seen in the context of pressures experienced by other museums.

In 2017, the Guggenheim in New York had to withdraw three works by Chinese artists because animal-rights groups argued they depicted cruelty to animals. Raffel also mentions the withdrawal of Andres Serrano’s photograph Piss Christ from exhibition at the National Gallery of Victoria in 1997 after protests, attempted attacks on the work and an unsuccessful injunction brought by George Pell, then Catholic archbishop of Melbourne.

“It’s interesting that it’s in the museum space that these pressures are seen, and why is that?” Raffel says. “Suddenly these ­spaces are more important than ever in terms of debates about our civic responsibilities and civic relations. In many ways, where politics is not able to give us that opportunity, the museums of the 21st century are becoming those frames of reference for this work.”

Quietly spoken but resolute and worldly in museum affairs, Raffel seems ready to deal with whatever challenges may come her way. Originally from Colombo, she arrived in Australia with her family in 1975, when she was 14, to escape civil unrest in Sri Lanka. An accomplished cellist, she went to Marsden High School — where Richard Gill was then teaching — and played in the Sydney Youth Orchestra where Richard Tognetti was also playing.

“I had to choose whether music would be my profession,” she says. “I wanted music to be a deep pleasure in my life but not my career.”

She studied art history at the University of Sydney and worked in London for several years at the Tate when it was opening its branch in St Ives, Cornwall, and with another organisation involved with Asian antiquities. She came to realise that she was much more interested in the art of her own time and in working with living artists.

In 1994 she moved to Brisbane, where the Queensland Art Gallery has just staged the first Asia Pacific Triennial of contemporary art. She asked for a job and stayed almost 20 years, rising to become deputy director.

At M+ she has 40 curators and learning curators on staff, including deputy director Doryun Chong (formerly of New York’s Museum of Modern Art) and moving-image curator Ulanda Blair (formerly of Melbourne’s Australian Centre for the Moving Image). Also on her executive team is John Wicks, who previously was director of finance and corporate services at the Art Gallery of NSW.