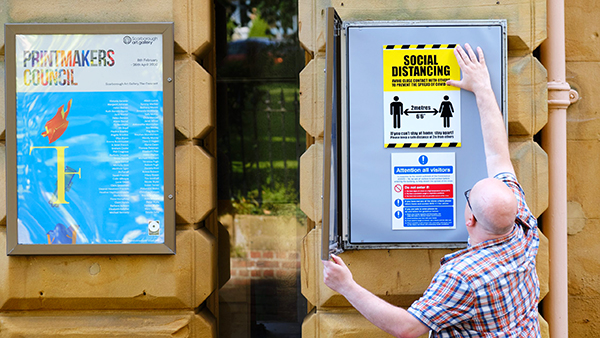 Scarborough Art Gallery prepares to welcome the public back after the first lockdown last summer.

‘No logic’ for delay as shops and public buildings get the green light to reopen in April.

Questions are being asked over why museums in England are not being allowed to reopen on the same date as other public buildings in the UK Government’s plan to ease Covid-19 lockdown restrictions.

Under the roadmap, which was unveiled by prime minister Boris Johnson yesterday, museums will be allowed to reopen no earlier than 17 May, along with other indoor venues such as cinemas and soft play areas. This is Step 3 of the government’s four-phase reopening plan for England.

But the continued classification of museums as “indoor entertainment venues” – first put in place when the government launched its tier system last year – has caused consternation among sector bodies. Similar public buildings such as libraries and community centres, as well as non-essential shops, have conditionally been given the go-ahead to reopen five weeks earlier, on 12 April.

Sharon Heal, the director of the Museums Association, said: “There’s no logic for museum reopening to be delayed until 17 May. Museums and their audiences are losing out because the government has classified museums as ‘indoor entertainment venues’ alongside cinemas and theatres. Yet in terms of implementing social distancing, they have far more in common with libraries, public buildings and community centres, which will all open on 12 April.

“Museums demonstrated last year that they are more than capable of opening in a Covid-secure way, with all the appropriate hygiene and safety measures in place. These additional five weeks matter. The ability to open earlier – even at reduced capacity – will be the difference between jobs being kept or lost, particularly as 17 May comes after the end of the furlough scheme.

“The Museums Association raised these issues with government as far back as December and we are now strongly urging it to reconsider so that our museums can open safely and welcome their communities back at the earliest possible opportunity.”

The plans were also criticised by the Association of Leading Visitor Attractions, which tweeted: “There is no public health or epidemiological justification for indoor attractions – which [Public Health England] state have no proven evidence of being sites of Covid transmission – not opening at the same time as non-essential retail. If you can open H&M you can open the V&A.”The majority of museums in England have been closed since at least 16 December. The shutdown will have lasted 142 days if they reopen as scheduled on 17 May.

Plans for reopening vary in each of the four nations. In Scotland, first minister Nicola Sturgeon announced today that the country’s levels system of restrictions could be reintroduced on 26 April, subject to infection rates.

The next review of Wales’s lockdown is due on 12 March, while Northern Ireland will review its current regulations on 18 March.

See also: Officials confirm: museums in England can reopen from 17 May under Boris Johnson’s lockdown roadmap