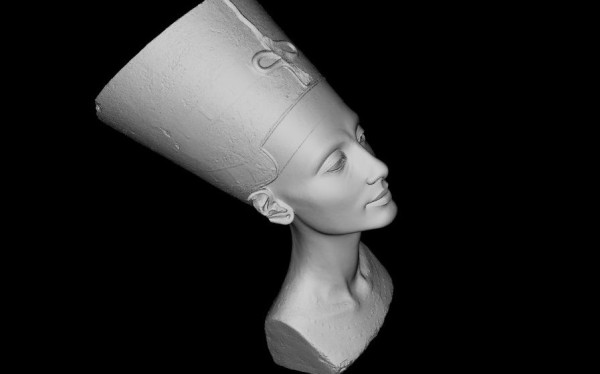 Claire Voon, Could the Nefertiti Scan Be a Hoax — and Does that Matter? Hyperallergic, 9 March 2016

Last month, we reported that a pair of artists scanned the bust of Nefertiti, currently on display in the Neues Museum in Berlin, without the permission of museum officials. Nora Al-Badri and Jan Nikolai Nelles had also released online, under a Creative Commons license, what they claim is the most precise 3D dataset of the artifact. While all types of creative iterations of Nefertiti have since surfaced, so has major skepticism of the legitimacy of the scans.

“The Other Nefertiti” was primarily an act of cultural repatriation intended to reassess ownership of artifacts and make them available to all, but the increasing fixation on the authenticity of the artists’ data production now also spurs deeper conversation on the value of material objects — what the artists describe, in this case of a politically contentious sculpture, as “the fetishization of sacred, staged artifacts.” Rather than outrightly rejecting their critics’ claims, they’ve maintained a cryptic attitude towards them: perhaps bound by ethical or legal reasons, or perhaps to highlight larger issues pertaining to cultural heritage.

“Maybe it was a server hack, a copy scan, an inside job, the cleaner, a hoax,” Al-Badri told Hyperallergic, addressing all major allegations or explanations. “It can be all of this, it can be everything. We are not revealing details. We are standing by the fact that we actually scanned it, but we don’t want to dismiss the other options at the same time.”

Calling hoax are those well acquainted with the scanner Al-Badri used back in October: a hacked Microsoft Xbox 360 Kinect Sensor, a game controller that many people adapt to scan objects in an affordable way. The Kinect, however, as countless 3D-scanning professionals and enthusiasts have noted, is unequipped to produce such incredibly detailed results.