Disclosure Statement: Helen Carter is Director of the Education Studio which, in conjunction with Museums and Galleries NSW, is holding a symposium on 3D technologies in museums and galleries on July 8.

3D technologies have been around for years – but it’s only now that 3D scanning and printing devices have become both accessible and affordable for many users. The result? New uses are blossoming in every field.

This week, a symposium at Macquarie University will investigate the use of 3D technologies in education, with a focus on how they may revolutionise museums and galleries as learning spaces.

Macquarie University’s Education Studio actively cultivates thinking “outside of the box” to encourage innovative developments in teaching and learning. In our work, we have seen a great interest in using 3D approaches.

One studio project, Digitisation, 3D modelling, analysis, preservation and replication of small objects of antiquity, is an unusual partnership between Dr Jaye McKenzie-Clark, a historian of the ancient world, and Professor John Magnussen, from the Australian School of Advanced Medicine.

Their combined expertise – in ancient artefacts and modern medical imaging – is being applied to the problem of non-destructive analysis of ancient pottery. We’re seeing some of the newest techniques in modern medicine investigating some of the oldest technology and writing in history.

Macquarie’s Museum of Ancient Cultures is fortunate to hold 24 Cuneiform tablets, dating from the third millennium BCE. These represent the oldest known form of writing in its collection.

In the past the only way to see what lay hidden inside was to destroy the outer shell. McKenzie-Clark and Magnussen have reproduced these ancient artefacts using 3D printing. They have used state-of-the-art CT scanners to analyse their composition – without even removing them from their boxes.

They have also used CT and 3D laser printing to create accurate replicas of ancient artefacts such as Gallic Sigillata (sealed clay) bowls and cuneiform tablets.

Another project generated out of the Studio, Innovations in Hands-On Anthropology: 3D Printed bone fragments, is led by Associate Professor Greg Downey. He is recreating bones with the help of 3D printing facilities for use in anthropology classes.

Multiple sets of pelvis bone fragments from “Lucy”, the 3.2-million-year-old partial hominid skeleton found in East Africa in 1974, have been 3D-printed in PLA plastic for use in practicum classes.

These 3D printed bones allow students to manipulate the fragments into the most likely configuration and from this draw conclusions relating to childbirth and bipedalism – much as the professional anthropologists had to do when the bones were first discovered.

Finally, Dr Yann Tristant, in conjunction with the Educational Design and Development group at Macquarie University, has developed the Virtual Egyptology program to support his teaching with the development of rich graphic activities for students through the use of 3D-scanned artefacts.

The web-based interface that works across all modern browsers and mobile devices lets students view the models without the need for worrying about plug-ins or learning complex standalone software.

The prototype that was developed during the course of this project is now being developed into a university-wide platform to enable interactive in-browser delivery of 3D media to learners and enthusiasts anywhere in the world.

3D technology is changing the way researchers and educators interact with artefacts in museums. As the technologies change, develop – and become more affordable – we’ll continue to see new applications spread.

Macquarie University’s Education Studio, in conjunction with Museums and Galleries of NSW is holding a symposium on 3D technologies in museums and galleries on July 8. 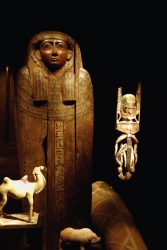 Tasmanian Museum & Art Gallery.
Positions Vacant » View All
» Team Leader, First Peoples Art & Culture – TMAG
» Booking Services & Rostering Officer – SLM
Latest News » View All
Egyptians petition for BM to return
the Rosetta Stone Read more.
BM pledges ‘not to dismantle’ Parthenon
sculptures amid reports of talks with Greece Read more.
NHM to install life-size Titanosaur
cast The world’s largest dinosaur to fit (- just) Read more.
Gallerie d’Italia’s Art & Finance exhibition
- a long & mutually beneficial history Read more.
TMAG’s ‘Lost’ last Tasmanian tiger remains
found! ... cataloguing collections matters Read more.
Top +
Council of Australasian Museum Directors c/o Mr Brian Oldman, South Australian Museum PO Box 234 Adelaide, South Australia 5001 Australia, © CAMD 2022
Copyright: All information and resources provided on this website remain the copyright of the Council of Australasian Museum Directors. Permission is granted for viewing and downloading for personal and not for profit purposes. Those wishing to reproduce any materials for commercial, educational or other uses are requested to contact us.
Disclaimer: The content of this website is provided for information purposes only and is not intended as a substitute for professional advice. No claim is made as to the accuracy or authenticity of the content of the website. The Council of Australasian Museum Directors does not accept any liability to any person for the information or advice (or the use of such information or advice) which is provided on this website. The information on our website is provided on the basis that all persons accessing the site undertake responsibility for assessing the relevance and accuracy of its content. No responsibility is taken for any information or services which may appear on any linked web sites. Hostgator.
.