Today, having restored the money, the Government cut it again. $5.4 million has been slashed from the Australia Council, money which would have been used to fund the telling of Australian stories.

Shadow Minister for the Arts, Tony Burke MP, said the Turnbull Government has shown today that there will never be certainty of funding as long as the Liberals are in government.

“The telling of Australian stories whether it be through music, drama or other art forms is at its best when there is certainty of funding,” Mr Burke said.

“Whenever it’s election time they claim the money is locked in and the moment an election is behind them the cuts return.”

Senator Catryna Bilyk, who was the lead Labor senator for the 2014-15 Senate inquiry into the Government’s cuts to the arts, said the latest cut was just another kick in the teeth for the arts community.

“The Liberal Government that already cut $105 million from the Australia Council in their previous term and tried to establish their own arts slush fund at the expense of small, independent artists, is once again showing contempt for Australia’s arts community,” Senator Bilyk said.

“This is particularly a blow for Tasmania’s arts industry, which is a key driver of Tasmania’s economy.”

The federal government has sprung yet another surprise funding raid on the Australia Council, writes Ben Eltham. 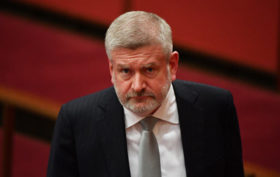 There was more bad news for the arts buried in yesterday’s mid-year economic statement. Tucked away in the budget items for the Communications and Arts portfolio came the announcement that the government would once again be cutting funding to the Australia Council, the nation’s key cultural funding agency.

Most in the sector support Creative Partnerships, which has had some good outcomes supporting donations to smaller arts organisations and even matched support for crowd-funding.

But the catch is that some of the money to fund Creative Partnerships will now be taken from the Australia Council’s budget.

$5.4 million over three years will be “re-prioritised” from the Australia Council and given to Creative Partnerships. It’s a familiar shell game in which funding for one aspect of the Arts portfolio is taken from another, even while overall funding levels decline.

The Coalition has raided the Australia Council’s coffers at regular intervals since taking office. There were budget cuts in 2014, followed by George Brandis’ devastating “excellence raid” in 2015, in which $105 million was taken from the Australia Council to pay for the outgoing Attorney-General’s ill-fated National Program for Excellence in the Arts.

The excellence raid plunged Australian arts funding into crisis, forcing the Australia Council to cancel several major funding rounds. It led to national protests and a highly critical Senate inquiry. After Brandis was replaced in the Turnbull reshuffle of September 2015, Fifield eventually got rid of the Excellence Program and returned some (but not all) of the money.

The constant churn has been highly destabilising, as the Excellence farce exemplified. Funding levels have also declined in absolute terms. Yesterday’s cut leaves the Australia Council’s 2017-18 appropriation at $207.6 million. That’s 5% below the $218.8 million bequeathed by Labor back in 2013. Funding has declined by approximately 12% in real terms, and discretionary funding by even more.

Arts Minister Fifield was silent about the funding cut yesterday, except to state that “in recognition of the value that Creative Partnerships Australia delivers to the arts sector the government will secure ongoing funding for the organisation by reprioritising” funding.

Representatives from the sector were less sanguine.

The National Association for the Visual Arts’ Esther Anatolitis told Crikeythat she was “confused” by the decision.

Labor and the Greens both slammed the new funding cut.

Labor’s Tony Burke wrote in a statement that “the Turnbull government has resumed its attacks on arts funding for the Australia Council.” Pointing out that the Turnbull government had restored funding subtracted through the Excellence raid last year, only to cut it again, Burke observed that “whenever it’s election time they claim the money is locked in, and the moment an election is behind them, the cuts return.”

The Greens’ Sarah Hanson-Young told Crikey that “This recent shuffling of money in the Australia Council’s budget directly undermines the Council’s independence and ability to make its own decisions.”

“The government first wanted final say on where money for the arts was spent under George Brandis’s own personal fund, and now it wants to dictate where the funding it restored six months ago goes,” Senator Hanson-Young added. “When will this government start backing Australia’s artists and give up on their petty penny pinching?”

Weary artists won’t be holding their breath. Funding chaos and line-item penny-pinching have been the dominant themes of arts policy since 2013.