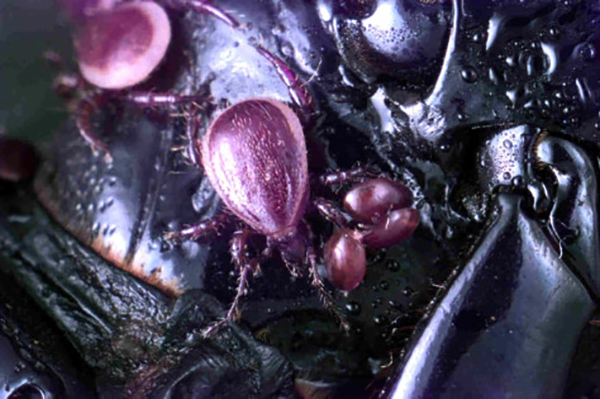 Megisthanus and Fedrizzia on a passalid beetle. Adults roam about, spending almost all of their adult life on a beetle that may not even leave the colony. Both groups are predators and scavengers. Image: A. O’Toole.

Today’s #CouchCurator is the Arachnids Collection Manager from Queensland Museum – Dr Owen Seeman  who is sharing some of his favourites from the collection.

I get to work in one of Australia’s best mite collections, with the only employed acarologist in Australia (Jenny Beard), and other amazing people who know the animals of Queensland and Australia. It’s a collection of people and specimens found nowhere else, and working on the collection with these unique people, while contributing to our meagre knowledge of mites in Australia, is a rare privilege.

What is so special about mites and why do you love working with them?

Mites have alien body forms (beautiful to some), are found in almost every imaginable place, and form curious relationships with other plants and animals. It’s these relationships that I find especially interesting, particularly mite-insect relationships.

There’s so little known that it’s easy to discover something new, but their relationships can be so downright bizarre that working them out is a challenge.

For mites Australia, it is estimated that there are about 71,231 species to go. Give or take a few. That’s based on a 5% knowledge of Australia’s mite fauna.

We’re knocking them off at about 15 per year. That’s not pretty maths.

My current research project delves into this issue, but looks only at the diversity of mites on insects. My current estimate is ca. 300,000 mite species globally on insects (and not the 10,000,000-40,0000,000 predicted by some… but that’s a very complex story).

What is your favourite species in the Collection and why?

I love our giant camel-spider (Solifugida) from Saudi Arabia (QMS 26079). Why? It wasn’t collected there. Instead, it hitched a ride in a shipment of peanuts. One can only imagine the surprise of the quarantine officer who saw this monster run out!

To get an idea about the size of the animals and mythos around them, see this example.

My speciality is mites, which are the tiniest of all arachnids but also the most diverse.

What is the biggest item in your collection?

I happened to describe the world’s biggest Mesostigmata in 2017, which is named Megisthanus leviathanicus. Roughly that mishmash of Greek and Ancient Hebrew translates as good God that’s an absolutely freaking huge mite.

By huge, I mean that the males hit 5 mm. These sleek monsters ride on beetles where they seem to control harems of daintier (and hairier) females.

However Megisthanus is not the biggest mite. That’s probably an engorged kangaroo tick (ca. 25 mm). But nature’s imitation of a haggis isn’t exactly a heart-warmer. 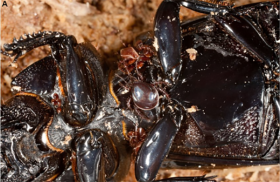 Megisthanus leviathanicus – “Major” males are the largest of all Mesostigmata, with the biggest male being 5.05 mm. Despite being large and common on passalids, it was described in 2017. Image: Jeff Wright. 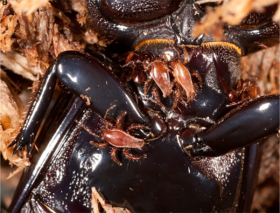 Megisthanus leviathanicus. Females are smaller, lyre-shaped (when young) and hairy. Typically, only one male is found per beetle, along with several females. But there are also “Minor Males” – lads that resemble females and presumably avoid the attention of the big boys! Image: Jeff Wright.

What is the strangest?

Mites are cool because they live in all sorts of strange places. Here’s one: Orthohalarachne diminuata lives in the lungs of sea-lions (QMS 91858-98). They’re not small either: you’d have no trouble seeing these delightfully disgusting things with your naked eye (which reminds me that a similar species, the fur-seal nasal mite, once infested a human eye, which was apparently painful!).

What is the most rare?

We probably have lots of these: mite species represented by single specimens. I avoid describing species from single specimens – they would have to be outrageously amazing. But I have described species from two specimens, such as Neomegistus remus, an attractive millipede mite from Lord’s Table Mountain and the only member of that genus in Australia.

Another way of looking at most rare is to consider the host.  Years ago in Tasmania, I removed mites from the skins of Orange Bellied Parrots, sent them to experts, who described the species as Titanolichus seemani (Adult Content: Thanks to my amusing surname, the Russian primary author may not have been aware that he created the rudest species name ever; I am very proud of that!). That skin was ca. 120 years old, so it wasn’t until recently we were sent specimens from Healesville Sanctuary (breeders of OBPs), proving that the species was still alive and as well as the OBPs. Which are critically endangered.

Along the same lines, the mites associated with certain plants are being driven to extinction with Myrtle Rust. I doubt they will survive the transition to nursery-only production.

What is the most common?