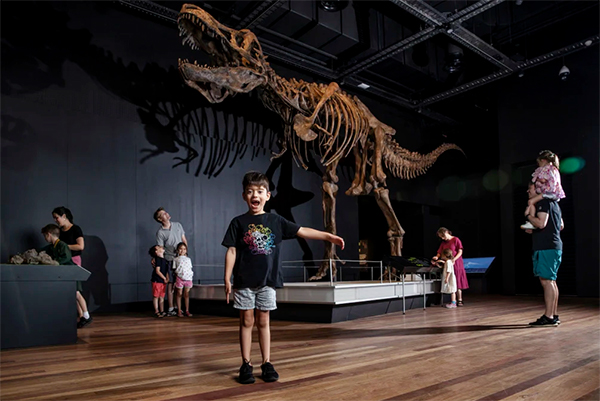 A new interactive exhibition at the Australian Museum introduces the public to the Tyrannosaur family and boasts an enormous collection of skeletons, skulls, fossil eggs, and more. How does the show stack up in the eyes of attendees? A father and son share their reviews.

In 1991 a school teacher in Saskatchewan discovered a Tyrannosaurus rex skeleton during a museum field trip. It took 10 years of careful excavation to uncover the entire skeleton, and the 13-metre long dinosaur was nicknamed ‘Scotty’. Believed to be over 30 years old when he died, Scotty is the oldest individual T-rex discovered to date, and while he spent most of his time on earth 65 million years ago in Canada, the cast of his skeleton made by the Australian Museum has spent the last few years touring North America, the UK, and Scotland.

Scotty only just made it back to Sydney before the COVID-19 travel restrictions were imposed earlier this year, flying first class to become the star of Australian Museum’s new exhibition Tyrannosaurs – Meet the Family. Scotty’s family includes the Dilong, Lythronax, and Albertosaurus, and you’ll find life-size skeletons of these dinosaurs at the exhibition too, although Scotty towers over them all.

Tyrannosaurs – Meet the Family is the first exhibition to take advantage of the museum’s brand new exhibition hall. What was once storage and office space below the museum has been converted into a sleek and modern-looking shrine of dinosaur skeletons, fossils and petrified poop. Australian Museum has never looked better.

There’s a scene in 2015’s Jurassic World that jokingly shows how bored children have become of dinosaurs, and while Scotty (and the petrified poop) will hold the attention of even the most iPad addicted young person, thankfully there’s a tonne of interactive media they can get amongst too. 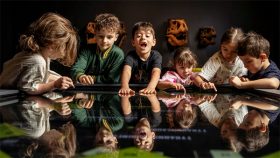 Kids flocked to an interactive game in the middle of the exhibition hall at the museum. Credit: Louie Douvis.

My kids flocked to the dinosaur-sized iPad in the middle of the exhibition hall to play the Tyrannosaur Tree game, where they had to furiously poke eggs on the screen to hatch various dinosaurs, then carefully match them to the correct branch of their family tree before meteors rained down on the screen and destroyed all their hard work in a fiery explosion. Then they actually got to be a meteor by jumping as hard they could and seeing how much devastating impact they had on the earth. You’ll know you’re close to this part of the exhibit when you hear a non-stop onslaught of stomping and laughing.

Elsewhere you’ll find dinosaurs on screens running amok through Sydney, and AR dinosaurs attacking unsuspecting children – but the best use of technology in the exhibit is for Scotty himself. Look closely at the shadow silhouette of his skeleton on the wall and you’ll notice that it moves. Scotty’s shadow magically howls, searches for food,and even puts on a puppet show. It’s an impressive effect and one that took me (and more importantly, my iPad-addicted kids) by surprise. 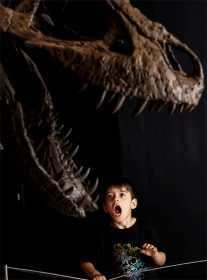 “Even though dinosaurs are so big, their brains were tiny,” says Archie. Credit: Louie Douvis.

On Thursday I went to the Australian Museum for the new Tyrannosaurus exhibition. There were so many huge dinosaur skeletons and even more fossils, bones and droppings.

My favourite thing in the exhibition was the Tyrannosaur Family Tree game in the middle of the main room. In this game you have to tap eggs with your finger and a dinosaur hatches out. Then you need to break crates and feed the dinosaurs the meat from inside the crates. You can even blow up the dinosaurs by exploding them with barrels! When you’ve hatched all the dinosaurs you have to match them to their proper names on the family tree. Our best time was seven minutes and ten seconds.

I also liked the meteor game where you have to jump as hard as you can to make a meteor crash into the earth. The harder you jump, the bigger crater you make. Our record was 350 kilometres wide.

The Tyrannosaurus skeletons are enormous and their teeth are super sharp! My dad put my sister’s toy bunny inside one of the dinosaur’s mouths and she cried. Even though dinosaurs are so big, their brains were tiny. Way smaller than mine! We saw a display of a dinosaur brain and it looked like a seahorse.

I had a fantastic time at the exhibition and I would recommend everyone who wants to know more about dinosaurs to go, but even if you don’t like dinosaurs and just like games, you’ll still have a lot of fun. I give it 500 dinosaur bones out of 500!