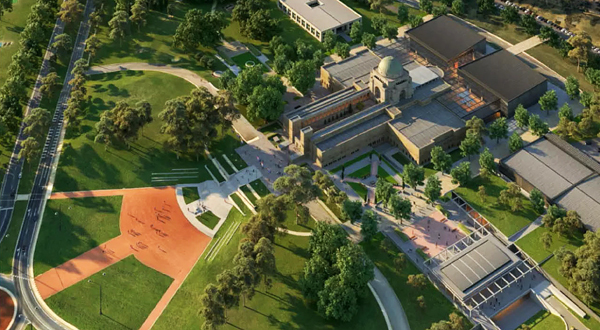 Artist impressions of the planned redevelopment of the Australian War Memorial.

The redevelopment of the Australian War Memorial will be designed to honour modern veterans, as much as commemorate past wars, director Brendan Nelson says.

The ambitious nine-year project, which will cost $498 million and has bipartisan support, will include demolishing and rebuilding Anzac Hall over three levels, a substantial increase to exhibition space, a new entrance and new research centre.

There’ll be a complete redesign of the memorial’s lower ground floor and a new underground exhibition hall to display large items such as helicopters and jet fighters.

The redevelopment will also include a live feed of current defence activities, an area for quiet reflection and a display of the nation’s cenotaphs and memorials.

But Dr Nelson maintained the building’s original facade would remain unchanged, as a symbol, in direct line of sight from Parliament House, of “the price paid for the freedoms that we enjoy and too often we take for granted”.

Speaking at the unveiling of the plans at Parliament House on Thursday, Prime Minister Scott Morrison said the memorial could never be “a static institution”, and needed to reflect the changing story of Australia’s veterans.

He said when the memorial was first opened in 1941, it “stood out, as it does today, not for its size but its simplicity, its restraint, its humility. It was not a tribute to war or a nation’s power or strength. It was a simple, humble memorial to the fallen and a home for their memory.”

But Dr Nelson said that today, the memorial, in its current state, was not able to adequately tell the stories of Australian personnel who have served overseas in the past two decades.

“Today’s servicemen and servicewomen are returning home to a country that has no idea what they have done, does not understand their service or the sacrifices they have made,” he said.

“Young servicemen and women are barely able to explain it to their families, let alone the rest of the nation. Their story must be told to help them understand the impact service has had on them, to help them transition to life back home, and to heal.”

He said he had been approached that morning by a Vietnam veteran who thanked him for doing what hadn’t been done for previous returning soldiers in his day.

“The opportunity, and the responsibility our nation now has, is to proudly tell the stories of what has been done in recent years in Afghanistan, Iraq, the Solomon Islands, and East Timor, and in peacekeeping and humanitarian operations,” he said.

“We must tell these stories not years or decades after they have occurred, but now. It is also the stories of families who love and support them.”

He also defended the cost of the redevelopment, maintaining that the funding was not at the expense of existing services to veterans.

“What the government is investing in the Australian War Memorial is one quarter of 1 per cent of what our nation will invest in defence over the next 10 years,” he said.

“Not one cent of it is actually coming in any way from veterans entitlements. This is for veterans, it is for them, it is for their families.”