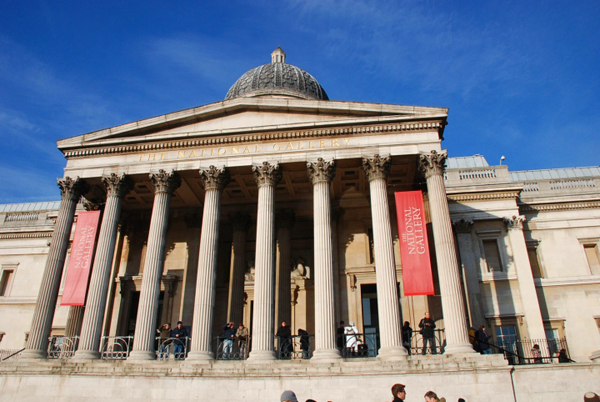 The National Gallery in London (image by Tosh Marshall).

Every year presents a new wave of challenges for London’s cohort of cultural attractions that have mostly struggled to maintain their high attendance records after the 2012 Summer Olympics tourist bump. The statistics are surprisingly low, with some figures falling as much as 40 percent. That number actually belongs to the National Portrait Gallery, which once boasted two million visitors in 2015 but fell to 1.2 million in 2017.

More recently, though, the museum partly attributed its low attendance numbers to broken visitor-counting devices. The London institution announced that it had discovered more than 600,000 visitors who were never recorded as arriving at the entrance. Instead of a 43% drop in the fall of last year, they are now showing a 10% decline in figures. While no longer facing such a dramatic upset, the museum’s director and trustees still face pressure to organize programming that can appeal to a wider audience and generate more income.

The National Portrait Gallery is a good example of a British museum proactively trying to turn their fortunes through blockbuster exhibitions. The institution’s director, Nicholas Cullinan, is responsible for the current Michael Jackson exhibition; Cullinan’s hope for the autumn season is anchored in the gallery’s upcoming 2019 lineup, which includes major exhibitions of Martin Parr and Cindy Sherman.

The National Portrait Gallery’s minutes from March 2017 declared a decrease in visitor numbers, which the museum’s chairman, William Proby, first dismissed as a citywide trend. Minutes from the National Gallery’s March 2018 board of trustees meeting also reveal a search for the cause of these slumping figures. The museum’s Director of Digital, Chris Michaels, expressed a desire to initiate a study on the impact of successful exhibitions on overall visitor attendance rates to help make better predictions about overall and exhibition visitor numbers. The report would also be used to make better decisions about targeted marketing.

Statistics published by the Association of Leading Visitor Attractions show a 6% drop in attendance at London’s seven biggest art institutions over the last three years, falling from 26 million in 2014 to 24.7 million in 2017.

On the other hand, the Tate Modern has seen record attendance since its expansion, jumping by nearly 24% from 2015 to 2016 — although numbers have dropped since. The Victoria and Albert Museum also announced a 26% surge of almost one million visitors compared to last year. Oddly, the museum’s director, Tristram Hunt, attributes the boosted figures to the institution’s sleek new minimalist entrance on Exhibition Road, which he considers to be much less intimidating than its decorous entrance on Cromwell Road.

“All the data we have shows that it is much more attractive to non-traditional museumgoers,” Hunt told The Guardian. “It is less, frankly, scary.”

London’s issue with cultural tourism stands in contrast to other global cities, like New York City and Paris, where museums are seeing steady growth and record-breaking numbers of visitors. The Metropolitan Museum of Art even saw a record 7.35 million visitors in last year’s fiscal year. The Louvre welcomed 8.1 million visitors last year, up 10% from 2016.

Some analysts have correlated the dip in central London’s tourism industry with record numbers in other regions of Great Britain. Nationally, historic properties have experienced a significant growth in their audiences with mills, monuments, boats, and burial grounds celebrating an 8% increase. This follows another trend of families buying season passes to their local art institutions and estates rather than taking expensive one-time trips to London. (Others have pointed to the rising popularity of champing, the practice of camping in churches across the UK.)

Other experts also point out that enduring transportation issues and terrorist fears have affected the British capital’s ability to attract tourists, according to an artnet news report. But Gerri Morris, founding director of a consulting company that tracks visitor trends, told artnet that the most recent dip in tourism numbers is part of a larger pattern. “We see a different group of people missing each year,” she said. “The people who are missing are general tourists and younger backpacker-type tourists, not people who make a beeline for cultural attractions.”

Morris is correct in her observation. Although attendance records have suffered at cultural attractions, London itself has received a record number of overseas tourists in 2017 — 30.1 million people, according to official statistics. Still, statistics indicate a slower rate of growth for tourism in the coming years.