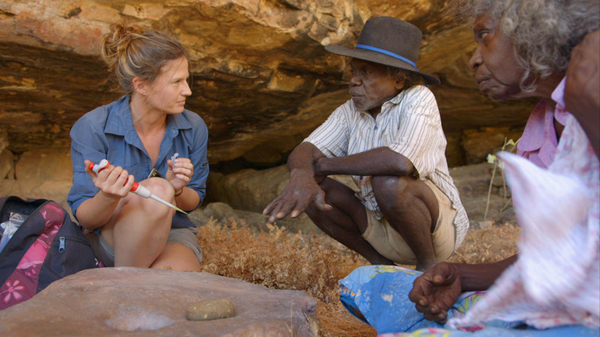 The question of when people first arrived in Australia has been the subject of lively debate among archaeologists, and one with important consequences for the global story of human evolution. Australia is the end point of early modern human migration out of Africa, and sets the minimum age for the global dispersal of humans.

This event was remarkable on many fronts, as it represented the largest maritime migration yet undertaken, the settlement of the driest continent on Earth, and required adaptation to vastly different flora and fauna.

Although it is well known that anatomically modern humans were in Africa before 200,000 years ago and China around 80,000 years ago, many archaeologists believe that Australia was not occupied until 47,000 years ago.

But our research, published today in Nature, pushes back the timing of this event to at least 65,000 years ago.

Together with the Mirrar Aboriginal people, our team excavated the Madjedbebe rockshelter in Kakadu, near Jabiru in Australia’s Northern Territory. A small excavation in 1989 at this site had proposed evidence for human activity in Australia at 60,000-50,000 years ago.

But some archaeologists have been reluctant to accept this age. Some pointed to the sandy deposit at the site and argued that the artefacts may have been easily moved down into older layers by trampling or burrowing animals.

Others said the measured ages for the archaeological sediments were not precise enough to support a date of 50,000 years, rather than 45,000 years ago.

Since those excavations in the 1980s, the debate has intensified. Analysis of DNA from the hair of an Aboriginal man who lived 100 years ago suggests that Aboriginal Australians separated from early Asian populations some times between 62,000 and 75,000 years ago.

On the other hand, climate records have implicated humans in megafaunal population collapse at 45,000 to 43,100 years ago, a time frame that had been presumed to correlate with humans’ arrival in Australia.

To make new research possible, a landmark agreement was reached between the University of Queensland (and associated researchers) and the Gundjeihmi Aboriginal Corporation representing the Mirarr traditional owners of the site.

The agreement gave ultimate control over the excavation to the Mirarr senior custodians, with oversight of the excavation and curation of the material. The Mirarr were interested to support new research into the age of the site and to know more about the early evidence of technologies thought to be present there.

In 2012 and 2015 our team excavated an area of 20 square metres at Madjedbebe. We found artefacts in three distinct layers of occupation.

Among the artefacts in the lowest levels we found many pieces used for seed grinding and ochre “crayons” that were used to make pigments. Our large excavation area allowed us to pick up very rare items, such as the world’s oldest known edge-ground hatchets and world’s oldest known use of reflective pigment.

During the excavations we recorded the three-dimensional coordinates of more than 10,000 stone artefacts using a laser total station. This device sits on a tripod and uses a laser and prism to record the location of artefacts and other features at millimetre accuracy, thus giving a very precise record of artefact position and layering.

We analysed these coordinates to test previous criticisms that artefacts may have moved a lot in the sand. We found some broken artefacts that we could fit back together, and by measuring the distance between these pieces we can understand how far artefacts have moved.

We also conducted an experiment to observe the movement of artefacts on the ground when people walked over them. These results allow us to respond to the earlier critics with data that point to a relatively small amount of movement, not enough to mix artefacts between the three distinct layers of occupation that we found in our excavations.

During the excavation we collected many kinds of samples for specialised analyses, including more than 100 samples for dating. We used both radiocarbon dating and Optically Stimulated Luminescence (OSL) methods to find the ages of the artefacts. Because radiocarbon dating is limited to samples younger than 50,000 years ago, we relied on OSL to help us find the ages of the lower part of the site.

OSL methods estimate the time elapsed since sand grains were last exposed to sunlight. Australian archaeologists have been wary of OSL methods because often in the past OSL involved sand grains measured together in a little group, resulting in ages that were not very accurate.

To get more precise ages, we measured thousands of sand grains individually, rather than in a group. We also had another lab analyse some samples to make sure our results were reliable. The result is that we have a convincing age for the settlement of Madjedbebe, and Australia, of 65,000 years ago.

See also: The extraordinary science behind an Aboriginal history discovery 65,000 years in the making