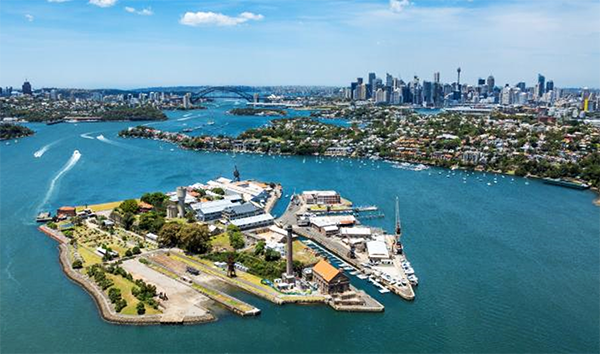 A plan for Cockatoo Island would see the “rewilding of the island” to reintroduce cockatoos to its environment, as well as “large-scale artworks”. Picture: Mark Merton.

A group of philanthropists has submitted an $80m proposal to transform Sydney’s Cockatoo Island into a “world-class arts and culture destination” to rival MONA and New York’s High Line, amid uncertainty over the heritage-listed island’s future.

Days after the Sydney Harbour Federation Trust, which maintains Cockatoo Island and other former military sites, made public its submission for more funding to an independent review, the Cockatoo Island Foundation, registered in 2019, has unveiled its submission for a “public/private partnership” to bring “hundreds of thousands if not millions” of visit­ors to the island each year.

The “regeneration” plan for the “severely underused” site would see the “rewilding of the island” to reintroduce cockatoos to its environment, as well as “large-scale artworks which are larger than the works typically exhibited in Australian museums and galleries”.

The island would be renamed Waremah, its original indigenous name, under the plan, which would also see the newly formed Cockatoo Island Foundation take control of the site. “The island … would become an essential part of any visit to Sydney and will drive international interest in Sydney,” the submission says.

The SHFT was formed in 2001 to rehabilitate former Defence sites around Sydney Harbour, with Cockatoo Island — a former convict, military and manufacturing site with indigenous history — opening as a tourist attraction, museum and campsite in 2007.

Drawing heavily on a Deloitte report commissioned into its operations, the SHFT is asking the government for $300m for mainten­ance costs and to avoid the sites falling into “private hands”. It is also asking for the ability to award longer, 49-year leases on its sites.

The new Cockatoo Island plan is led by art philanthropists Anthony Berg, Danny Goldberg and Simon Mordant. The group has committed $80m and will aim to secure $20m more.

However, their funding is intended to be in addition to government funding to refurbish the island, which the Deloitte report advised needed $194m.

“It’s absolutely not a privatisation,” Mr Berg said of his vision, and the new gallery would not charge public visitors.

“What we’re proposing is a partnership between a group of philanthropists, the federal government and the NSW government so Cockatoo Island would stay in public ownership in perpetuity,” he said. “If we’re going to spend that kind of money ($194m), why don’t we do something really exciting there.

“When people reach the island it would be a total immersive experience. What you could envisage is some really large artworks that excite and inspire people. I could envisage hundreds of thousands, if not millions, of visitors each year. Think about what MONA has done to Hobart, and what the High Line has done to New York. “

Joseph Carrozzi, chair of the SHFT, which also oversees North Head Sanctuary and Sub Base Platypus site in North Sydney, said it was “confident the independent review and government is committed to keeping public ownership” of Cockatoo Island.

Environment Minister Sussan Ley said the panel “has made no recommendations to this point”.