You are here: Home » Articles filed under: 'News' » Article: 'Gallipoli: scale of our war'

Gallipoli: scale of our war 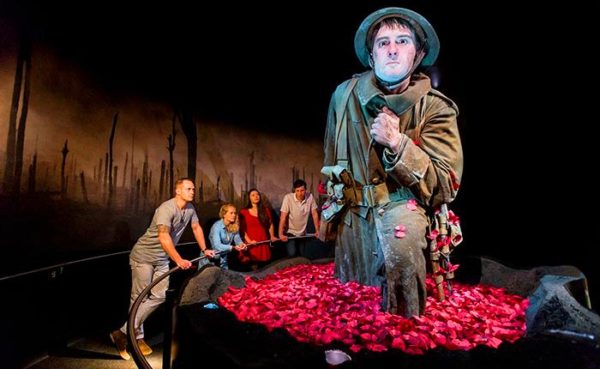 Gallipoli: The scale of our war – the ground-breaking exhibition created by Te Papa.

More than 700,000 people have seen Gallipoli: The scale of our war in its first year, making it the most visited exhibition in Te Papa’s history.

The ground-breaking  exhibition was created by Te Papa, working closely with Weta Workshop.

“The scale of the public’s response to Gallipoli has been astonishing,” says Te Papa Chief Executive Rick Ellis.

“Beyond the sheer numbers, we have been humbled by the depth of feeling we see in our visitors.”

“They are coming in family groups, they are immersing themselves in the information and the emotion, and they are leaving with a new understanding, and often, with tears in their eyes.”

Visitors are encouraged to share their response on a paper poppy which is left in the exhibition. Over half a million poppies have been left by visitors to date.

Many visitors simply leave their name, or the name of a relative who fought:

Weta Workshop’s Sir Richard Taylor, Creative Director of the exhibition, says the most amazing responses he has heard are from the extreme ends of the age scale.

“I have a particular poppy that I love – ‘thank you soldier, sleep well, we love you.’ From a seven year old girl.”

“And a man, maybe in his 80s, came up to me and said ‘all I can think to do is crawl into a corner and weep,'” Richard Taylor recalls.

The $8 million exhibition was made possible by a $3.6 million contribution from the Lottery Grants Board. It will be at Te Papa until 2019. Entry is free.

Richard Taylor paid tribute to the teamwork that brought together the worlds of movies and museums.

“This was a creative collaboration between Te Papa and Weta Workshop, and together I think we achieved something very special,” Taylor says.

Specialised firms created many of the exhibition’s components, from 3D digital maps through to the specially manufactured larger-than-life boots.

“There were eight separate Wellington-based companies involved, and the sense of near fanatical focus and pride that they brought to the project was extraordinary,” Taylor says.

Information panels in the exhibition have recently been updated in light of new information which has almost doubled the number of New Zealand soldiers who fought at Gallipoli.

“This new information confirms that the scale of New Zealand’s war was even greater than the official histories tell us,” says Te Papa’s Kirstie Ross, the exhibition’s lead curator.

“It is a reminder that history is never fixed – there is always more to learn and more to discover,” says Ms Ross.

Information panels in the exhibition have been updated to reflect the new research.

Te Papa is focussed on making the exhibition as accessible as possible, with specialised tours including those for the Deaf community, the blind and visually impaired, people with intellectual disabilities, and those with brain injuries.

Early bird tours at the start of each day enable visitors to book ahead and beat the queues, and can be booked on Te Papa’s website.

Gallipoli: The scale of our war – by the numbers

More information about the exhibition can be found in the original media release issued when Gallipoli: The scale of our war opened.