Stephanie Wood, A.C. Grayling: human history tells us that dropping our bundle right now is not an option, The Age, 7 May 2017 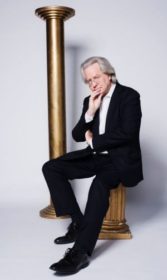 “You can’t turn your back on the process, you can’t not be involved in society, you can’t not keep arguing with your politicians.” Photo: James Brickwood.

As we pass the entrance to the hallowed Mitchell Library Reading Room, I’m terribly worried. I’d faltered around the Defenestration of Prague, stumbled at the Edict of Restitution and fallen at the Peace of Westphalia.

And now here I am, with Professor A.C. Grayling (the “A” is for Anthony), one of the greatest minds on the planet, and before I even start to ask him about his challenging book on the history of the 17th century, my feeble mind is floundering at the point of polite chit-chat.

The British philosopher, humanist, vigorous anti-Brexiter and devout secularist and atheist saves me from myself with an observation: libraries and churches, he says, are the only places that command silence.

A State Library of NSW staffer leads us into the original manuscript room, the venue for our interview. It offers a literary backdrop (it’s lined with all the shortlisted books in the Miles Franklin Literary Award’s 59-year history), and inspiration. I find a chit-chatty question: you must have spent some time in libraries, I say.

Oh yes, he says, and he tells me about the old reading room at the heart of the British Museum. “It’s so beautiful, the great domed building,” Grayling says affectionately, as though he were remembering an old friend.

“It was like being in a slightly sort of sub-aqueous atmosphere, the light and the thickness of the silence in there.”

But the porters who moved around the library delivering books, well, sometimes they irked him. “They used to have these big, big bunches of keys and the keys would clink and clink and there was something about the very high-frequency noise in this thick, velvety silence that … used to jolt me.”

In his 68 years, Grayling has written about 30 books on subjects including scepticism, moral values, religion, liberty and war, and on great figures in the philosophy canon including Wittgenstein and Descartes. His “secular bible”, The Good Book, was released in 2011.

He writes columns for publications including The Guardian, and is working on a memoir of his early life in Africa, an all-encompassing history of philosophy, and a book responding to Trump and Brexit that will be released in September called Democracy and Its Crisis. “It’s a discussion about what went wrong; what’s happened with our democracies,” says Grayling

His latest book is titled The Age of Genius: The Seventeenth Century & the Birth of the Modern Mind. “The mindset of the best-informed people in that century changed from being medieval to being modern in so short and tumultuous a time,” he writes in the book’s introduction.

I ask him about our time, that crisis of democracy, the profound influence of the internet: will historians and philosophers in years ahead view it in epochal terms, as a time of tumult, as disruptive and distinct as the 17th century? His answer is a ramble that starts with Fukuyama (the political scientist and author), touches on the doctrines of perfectibilism and meliorism (Google them), and casts back to ancient Egypt and the clay tablet.

But still, there are some kernels I take from it: “The great story of human history is of a very, very wobbly-wheeled cart that we’re trundling up a hill and there’s always the risk that it’s going to tip over as it did with Trump and Brexit … The price of anything worthwhile is vigilance and endeavour … You can’t turn your back on the process, you can’t not be involved in society, you can’t not keep arguing with your politicians and keep fighting for human rights and keep being involved. If you stop, you become lazy and that cart will begin to wobble and fall off the hill.”

I’m not sure my question has been answered, I’m not sure whether we’re in epochal times, but I’m not worried any more – other than about appearing star-struck. Grayling is delightful; the light pours through the window onto his silver-maned, blue-eyed charisma; he’s like some marvellous twinkling wizard from an Enid Blyton story. He’s a vivid talker, as though he’s been schooled in the dramatic arts.

His eyebrows lift. He smiles gleefully as he drops some Latin (docendo disco, “I learn by teaching”) or quotes the Bible (“Consider the lilies of the field, they neither spin nor weave”).

I’m not even worried that I flunk his test. He asks me a question to illustrate his thoughts on a good education. “If I ask you, ‘What percentage of fresh water consumed in the UK is imported?’, what answer would you give?” I try to be clever and lateral; potentially all of it, I say, given how water is constantly recycled around the Earth and its atmosphere.

I’m wrong, of course. The answer, he says, is 70 per cent, in the form of imported fresh fruit and vegetables, which are mainly water, and often grown in countries with water shortages.

“That kind of realisation suddenly makes you think, ‘Oh my God, is that what happens?’ ” says Grayling. “That jolt of perception is constantly what an education should be about. It should be inviting people to see things.”