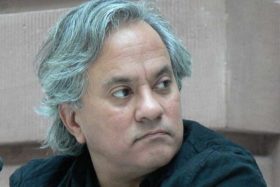 Today, 29 March, the British prime minster Theresa May enacted Article 50, formally notifying the European Union (EU) of the UK’s intention to withdraw. Artists, museum directors and members of the art trade have all expressed their shock and concern over the results of the June referendum, in which 52% of voters opted to leave.

Speaking at the opening of his exhibition at Lisson Gallery in London today, the British-Indian artist Anish Kapoor described the move as “heartbreaking”. He says: “It’s one of those things that goes against the flow of history. Frankly, nationalism diminishes ourselves. We want more than that, we want a bigger, more open vision.”

How Brexit will affect arts and culture in the UK has caused much speculation, particularly within the trade. A rapidly devalued pound was one of the immediate after effects, but the repercussions for any changes to policies governing VAT and resale royalties will take far longer to emerge.

Kapoor, who employs 30 people in his London studio, half of whom are not British, says he is “very concerned” about the consequences for his practice. “London is a great place for the art world, but most art buyers are not English. What will it mean for the whole economy of the art world? Sadly, it really is a matter of small minds, small hearts,” he says.

Kapoor is among a raft of leading cultural figures who campaigned to “remain” in the EU (according to the UK’s Creative Industries Federation, 96% of members were against Brexit). Other artists who have been vocal in their opposition to Brexit include former YBAs Tracey Emin and Damien Hirst and Europeans who have made London their home including Wolfgang Tillmans.

Meanwhile, directors of public institutions including David Fleming, the director of National Museums Liverpool, and Stephen Deuchar, the director of the Art Fund, have warned against possible funding cuts.