You are here: Home » Articles filed under: 'News' » Article: 'A historian considers the Brisbane River'

A historian considers the Brisbane River

March 9th, 2022 | Browse other: News. | Tagged with: Brisbane floods: pondering the wisdom of placing our major galleries libraries and theatres on the banks of a flood-prone river | 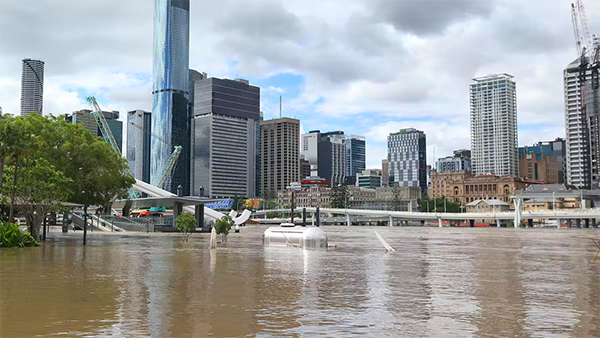 Margaret Cook, Brisbane floods: pondering the wisdom of placing our major galleries, libraries and theatres on the banks of a flood-prone river, 2 March 2022

As a historian, I spend many hours at the State Library of Queensland looking out the large glass panels gazing at the Brisbane River. Its tranquil brown water quietly meanders past, offering an ideal place to watch the CityCat ferries and the occasional passing rower.

But this weekend the water was roaring, racing past the library, full of pontoons, boats and debris. The river broke its banks, reclaiming its floodplain and inundating buildings in its path, until the flood peaked at 3.85 metres at the Brisbane gauge.

Maiwar (Turrbal name for the Brisbane River) has a long history of floods, as does the south end peninsula or Kurilpa, “place of the water rat”. This land, once full of waterholes, creeks and wetlands provided sustenance for Turrbal and Jagara peoples for centuries. 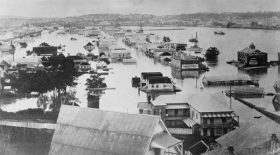 By 1893 when a flood of 8.35 metres occurred in central Brisbane, South Bank was an industrial site occupied by wharves, factories, commercial businesses, and the railway line, with residential estates in nearby West End.

After the flood, commercial businesses moved to the north side and between 1900 to the 1970s the south bank declined, left as largely undeveloped open space.

In 1969, the Queensland Art Gallery Site Committee selected the river’s south bank as the site of a new state art gallery, its river location regarded as enhancing its aesthetic appeal.

By 1974 the state government had acquired more land for a cultural precinct, undeterred by the 1974 floods that reached 5.45m at the Brisbane gauge. 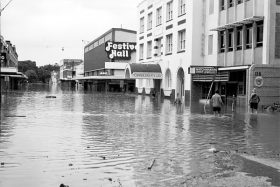 The 1974 floods reached a height of 5.45 meters. Queensland State Archives 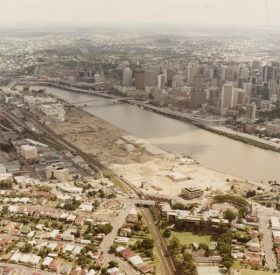 By 1987, the Queensland Art Gallery and Queensland Performing Arts Centre (both far left) had been opened, but most of the south bank was undeveloped. Queensland State Archives.

With its riverside landscape forecourts and restaurants, and iconic Brisbane eye, the designs took advantage of the location, and were intended to make a statement when viewed from the north side of the river.

The adjacent land was developed for World Expo ’88, now South Bank Parklands and home to the Queensland Conservatorium (1996) and ABC studios (2013).

The precinct stretches more than 450 metres along the Brisbane River and is now the cultural hub of Brisbane. 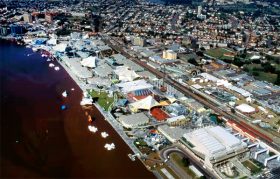 In 1988, South Bank was home to the World Expo. Queensland State Archives.

But South Bank’s watery history is never far away.

In 2011 Brisbane again flooded, this time to 4.46m at the Brisbane gauge, and the precinct’s vulnerability was exposed. Within hours its riverside location switched from an asset to a liability. The carparks and basement levels were inundated where the electrical, fire and air-conditioning systems were located, rendering the buildings unsafe.

The buildings were all closed as basements pumps went into overdrive. 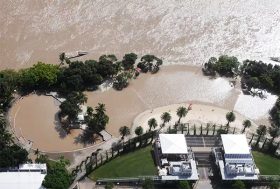 Water did not enter the Queensland Art Gallery, but the lower level of the Children’s Art Centre, River Café and back-of-house areas were damaged at the Gallery of Modern Art. The first floor was well above river levels and the ground floor’s robust design allowed it to be hosed out.

The State Library was forced to move its collection to higher levels – as staff had been doing in previous wet weeks – and was saved by the 2006 renovation that had already relocated some books to higher levels. The Edge, the children’s space on the ground floor, was damaged.

Almost three metres of floodwater inundated the lower end of the Playhouse at the Queensland Performing Arts Centre. It was a month before performances could be held.

The headquarters of the Queensland Theatre Company, only blocks away in Montague Road, was in waist-deep water.

Thousands of props and costumes were destroyed – years of theatrical history were sent to the dump. The stage flooring and lower-level seating, bar, reception and green rooms were irrevocably damaged.

But after a few weeks, in the spirit of “the show must go on”, the curtains re-opened at the Queensland Performing Arts Centre and these cultural hubs returned to business as usual.

When floodwaters rose again this year my fellow historians and I were texting each other to ask: “what’s happening to the State Library, is it in trouble?”

Sadly, it was. The State Library of Queensland, its access limited for months by COVID-19, is again closed. The community tool library on ground floor of the library is completely under water.

The Queensland Theatre Company is again inundated with water. 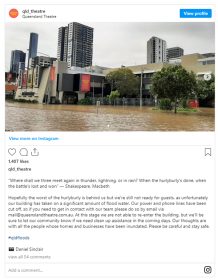 Performances at the Queensland Performing Arts Centre are postponed until at least March 7.

The ABC, an essential service in floods, was inundated. Brisbane news was diverted through Melbourne or Perth and local journalists reported in the field. 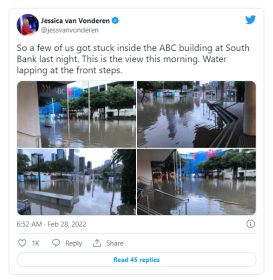 In a few weeks’ time I hope to return to research at the state library. Once again, I will look out over the river and enjoy the peaceful reverie of seemingly benign water pass by.

But this time I will contemplate the wisdom of placing all our cultural repositories on the banks of a flood-prone subtropical river.